Ferdinand Risco was entangled in a series of sexual harassment incidents with employees along with severe financial improprieties, according to the report. 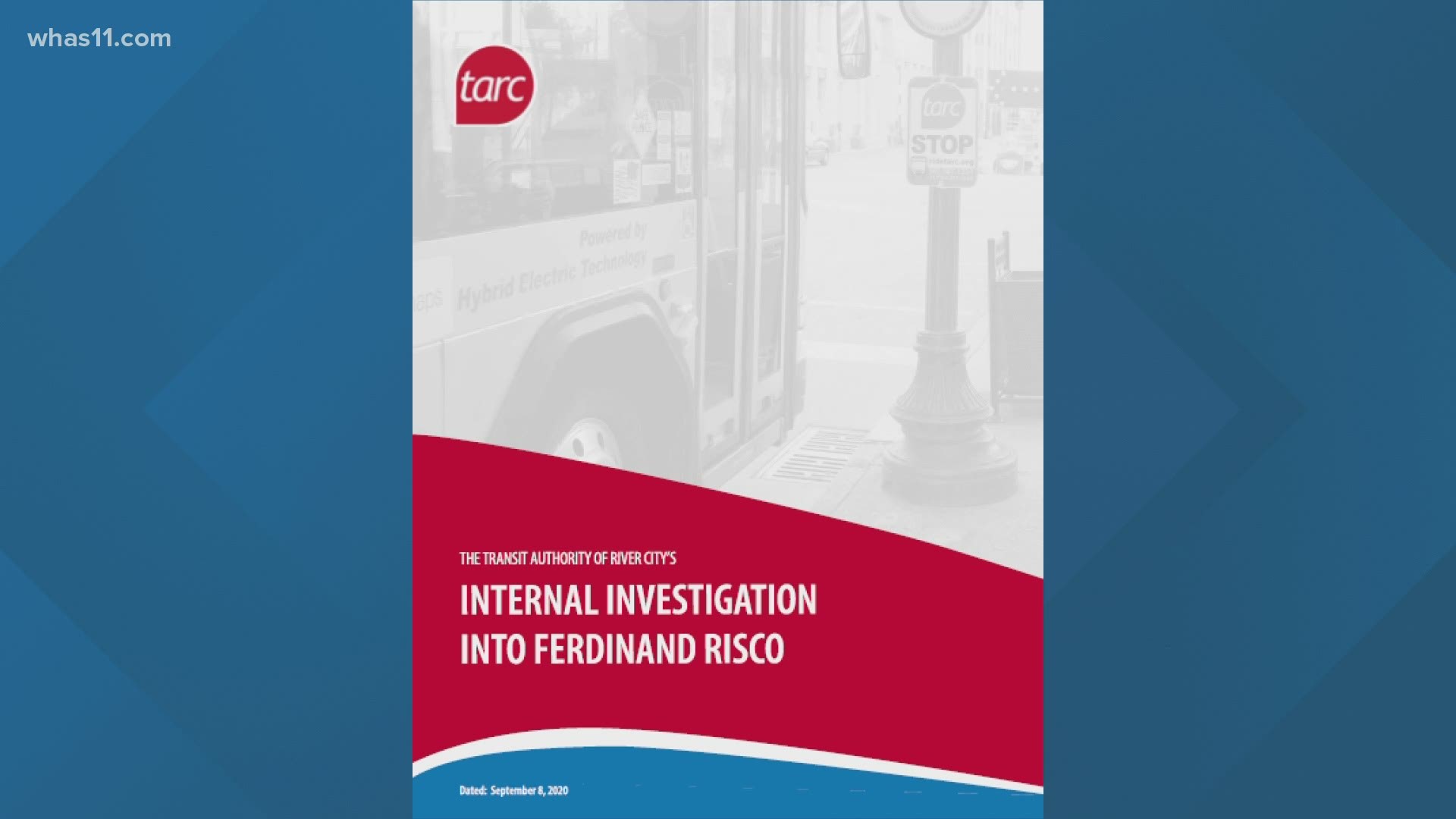 LOUISVILLE, Ky. — TARC's internal investigation reveals startling and disturbing details about the 14-month term of ex-director Ferdinand Risco. The 124-page document was released Tuesday and it's a lot to unpack.

Risco was entangled in a series of sexual harassment incidents with employees along with severe financial improprieties, according to the report.

Three weeks before he was asked for his resignation, investigators said a compliance officer came forward to the TARC Board to discuss Risco’s sexual harassment and victimization of several women.

The summary of the report called the findings “one of the worst periods in TARC’s 46-year history.”

A February 11 meeting with Deputy Mayor Ellen Hesen would signal the end of Risco’s employment. She told him he was “done” after seeing evidence of wrongdoing including sexually explicit text messages.

He handed her his resignation as requested and left town shortly after, the report said. Mayor Fischer announced the resignation of Risco the following day.

The report said Risco subjected several of the witnesses to unwanted sexual advances, off-color comments and sexually charged behavior. Many of the witnesses reported lewd comments, sexual gestures, sexually suggestive messages and demands for sex in exchange for job promotions.

Information from witnesses appears to show “a pattern of behaviors exercised by Risco to groom, discredit, isolate, intimidate and economically control his targets,” according to the report.

It also said Risco exploited his position as executive director and used “economic control” to manipulate his targets so they would feel obligated to him.

“He methodically created a paradoxical culture of fear and personal loyalty that rendered his targets’ silent,” the report said.

The women Risco targeted would be placed in “positions with high salaries which investigators say was unwarranted by the position and/or the knowledge, skills, experience and abilities of the targeted-survivor.” The report also said his selections of candidates were “disproportionately women who lacked direct experience in the requisite position and who had primary financial responsibilities for their families.”

Investigators said because of Risco’s behavior towards his victims, no one came forward to report any of the incidents to the Board until January 2020. An employee, referred to as "Witness C" in the report, made the first allegations.

The report said Risco’s treatment of the Board and employees at the transit service was evidence of his “manipulation of structures to limit oversight of him.”

Investigators also determined that Risco misappropriated public funds of an estimated $228,000 to give to a contractor he was sleeping with.

Investigators said from February 2019 to February 2020, Risco’s travel was more than $63,000 and covered 23 different trips. However, the report said after he became the permanent executive director in April 2019, he took advantage of his position.

“He stayed in hotels in Atlanta even though his home was there. During that time, he stayed in expensive hotels and there is evidence that he ate well and drank alcohol at the expense of TARC,” the report said.

Investigators said it was “offensive” Risco could stay in a $600 a night hotel, running up tabs to $400 and “ride in a $30 Lyft LX to go a couple of miles for dozens of days.”

They said the excessive spending was “egregious” because their ridership may spend $600 a month for housing their family, $400 to feed them and buy a bus pass for $30 to maintain a job.

“Even if travel is permissible, it must be compliant with rules. Risco’s was not," the report said. "Risco was obviously familiar with the Travel Policy as he was responsible for approving all other employee’s travel under it,” it continued.

TARC filed a lawsuit against Risco in August, seeking $750,000 for previous settlements and lost finances paid to the contractor.

The matter involving the misappropriation of funds has been turned over to TARC’s external auditor, the state auditor and the Commonwealth of Kentucky for a potential criminal investigation.