Mayor Fischer stressed the importance of diversity on the board and Metro Council President David James called out the FOP for being "divisive." 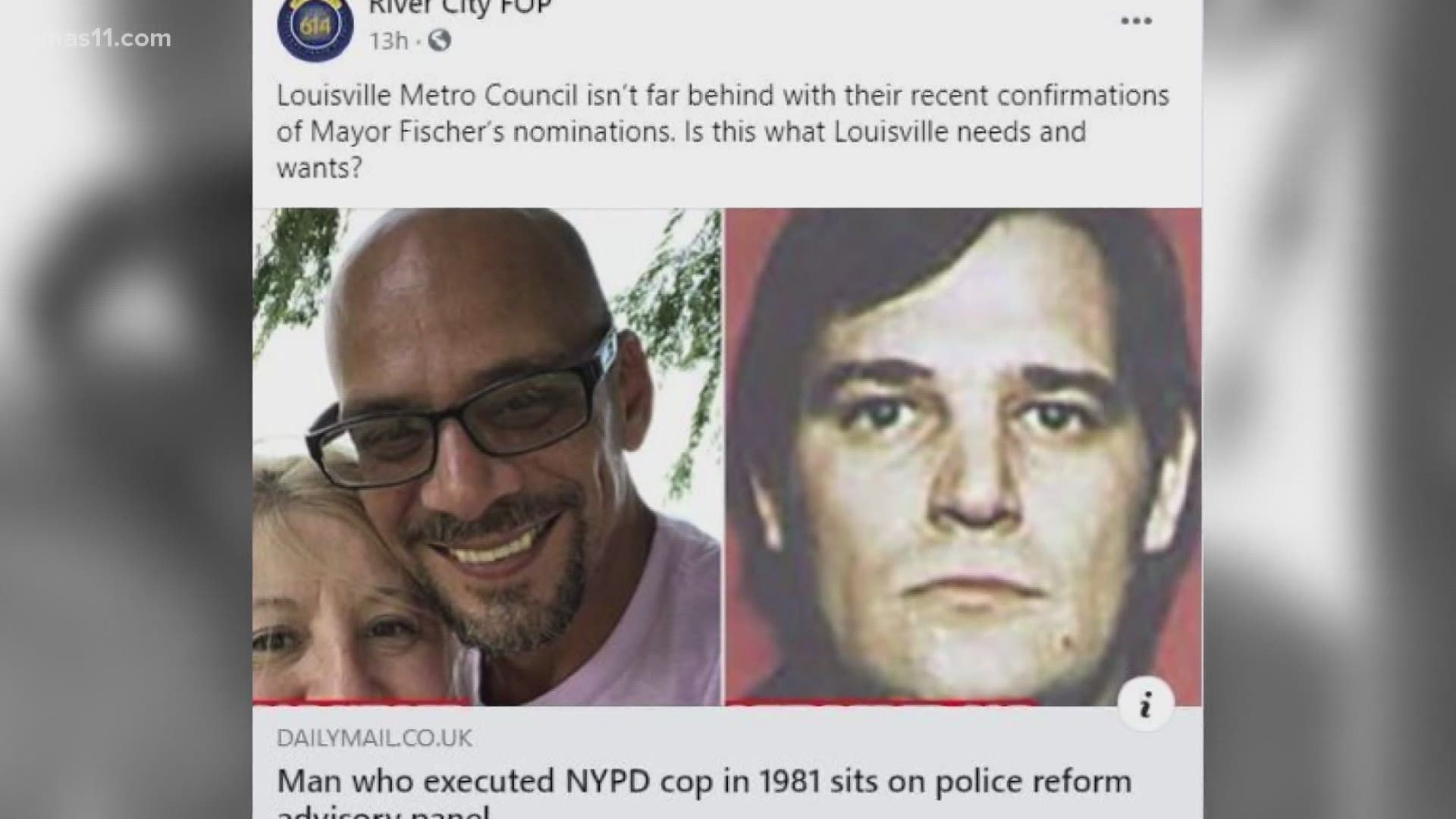 LOUISVILLE, Ky. — After the River City Fraternal Order of Police (FOP) made a post on social media criticizing the newly-formed Citizen Review and Accountability Board, Louisville Mayor Greg Fischer and two members of Metro Council called it out as "divisive" and "sickening."

The now-deleted post linked to an article from the UK publication The Daily Mail about Richard Rivera. Rivera was convicted of killing a police officer in 1981 and is now on an advisory panel for police reform in New York state after serving his prison sentence.

"Louisville Metro Council isn’t far behind with their recent confirmations of Mayor Fischer’s nominations," River City FOP said in the post caption. "Is this what Louisville needs and wants?"

Bussey and Taylor were involved in protests this past summer and made comments on social media regarding LMPD, that caused several councilmembers to voice concerns.

Councilmembers referenced social media posts by Taylor, including one from September 2020 where he wrote on Facebook "LMPD you are evil, the devil." A post was also brought up by Bussey where she allegedly wrote in a Facebook post, "I hate police."

During Wednesday's press conference, the Mayor stressed that he nominated the two because of their involvement in the protests and the "valuable perspectives" they'll bring to the civilian review board.

"Having a civilian review board that has all those voices mixed together is a good thing. It's not a bad thing," Metro Council President, David James, (D-6) said.

RELATED: Nominees for review board will provide accountability and oversight to LMPD

In Wednesday's press conference, Mayor Fischer and Metro Council President David James stressed the importance of diversity on the civilian review board. Fischer said he worked with the council to select nominees of varying backgrounds and viewpoints.

"Those voices have to be on this civilian review board," the mayor said.

"Change isn't always easy but it's good," James said. "Being divisive and trying to tear apart our city is not how were going to get there."

Green called the post a "veiled threat" likening it to something "thugs" or "a gang" would do, adding that it was "intentional" in comparing the civilian review board members to "cop killers."

The River City FOP responded to the city's statements, saying the post was never intended as a threat.

"There was to be no threatening tone in the post. The post was actually intended to show people 'okay, this is where we are in Louisville right now regarding our review panel. look what they have in New York, are we headed down that path?'" FOP Press Secretary Dave Mutchler said.

Mutchler said the union wants to make it clear it doesn't support anyone making threats to someone, just for a disagreement in views.

"I regret that it turned into this," Mutchler said. "That was never the thought when it was put out. The message was we disagree with what's going on with our civilian review panel."

Mutchler said the mayor's nominations of Bussey and Taylor to the review board were "divisive" and something police wouldn't want.

"There were other nominations that could've been made. It didn't have to be people that blatantly they say they hate the police," Mutchler said. "Is it a good thing? We don't think it is and we're going to convey that."

The post wasn't conveyed the way it was intended, Mutchler said, which is why he decided to take it down.

Mayor Fischer in condemning the post, said he hopes the FOP will "expel" those thoughts from their organization. Councilwoman Green called for the FOP to remove the person who made the post from the organization.

Mutcher said he wrote the post but does not have plans to step down.

"It's clear on its face that that was not meant to be a threat to anyone and it was not meant to cause the uproar sort of that it did," Mutchler said. "But because it did, and that wasn't the intention, we thought it would be wise just to take it down."

Mutchler said the FOP will "find a more efficient, effective" way to deliver the FOP's message in the future.

"We want to thank Mayor Fischer, the Louisville Metro Council, David James, Jessica Green and many members of the community for publicly speaking out today in support of the Civilian Review Board and its members. Some organizations felt the need to share egregious articles that clearly put civilian servants in jeopardy. We will not be deterred from our duty to serve our community because this has always been bigger than the two of us. This is about transforming public safety for the city of Louisville and bringing accountability to the LMPD. We are committed to serving faithfully on the Civilian Review and Accountability Board."

Mayor Fischer revealed Wednesday the civilian review board will meet April 15, now that it is fully formed, to get organized and work on hiring an Inspector General.

You can watch the full press conference below: