Residents in a downtown Louisville apartment tower have questions after a drone operated by an off-duty officer was spotted hovering around the building. 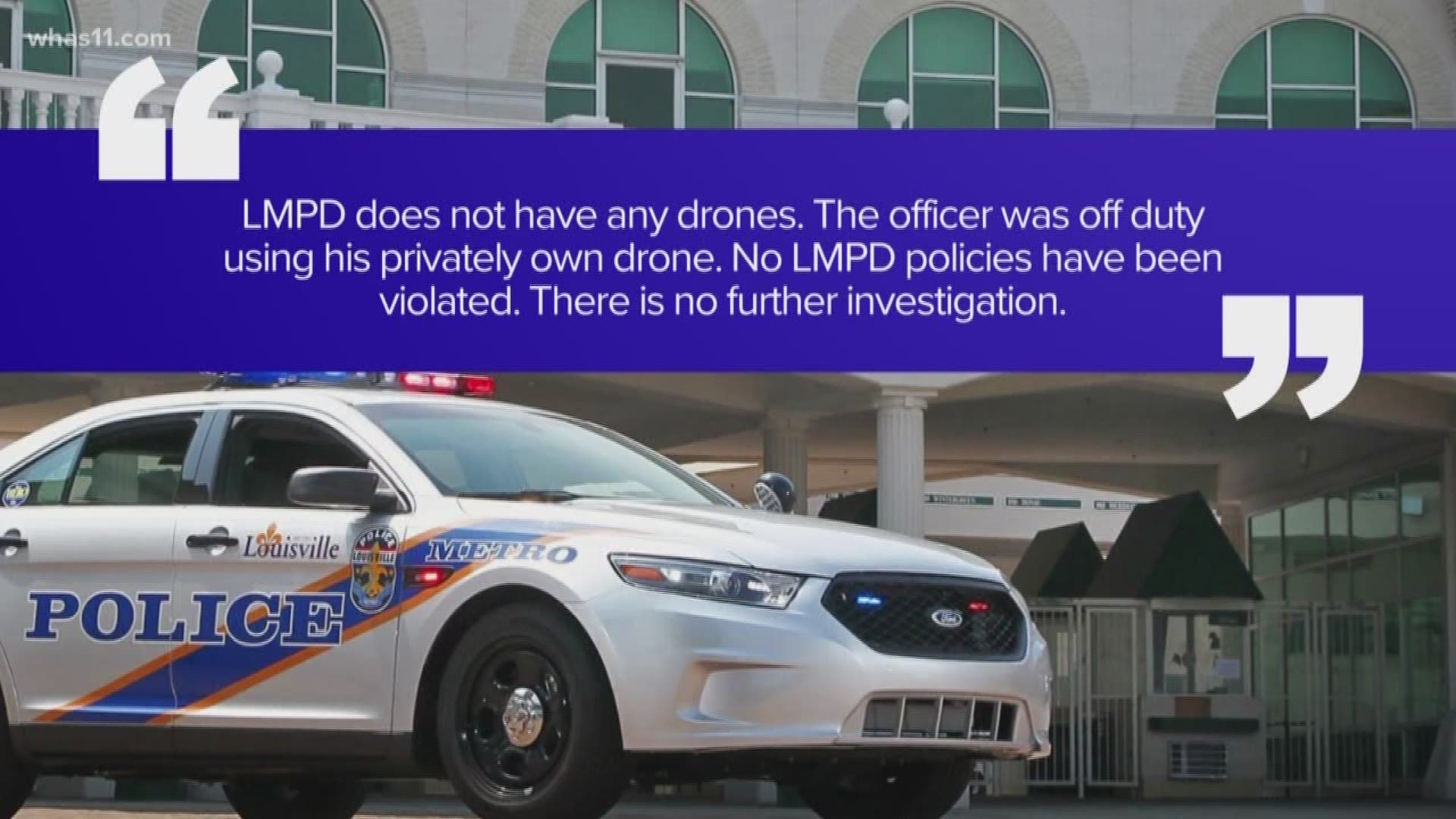 LOUISVILLE, Ky. — Residents in a downtown apartment tower say they want answers after seeing a Louisville Metro Police officer flying a drone around the building.

Rae Hodge, a writer for CNET, said she was alerted about the incident by her roommate.

“Roomate called. LMPD drone just stared him down, arm’s reach, on apt patio, several floors up. No probable cause apparent. Proceeded to do the same for other floors. Cop photog’d loading drone into truck, adjacent lot. Bldg mgr not advised. Will update w/ whatever else I get,” Hodge said via Twitter.

Hodge's roommate, Bruce Lainhart, said he was out on his balcony at the 800 Tower City Club Apartments around 5:30 Friday evening when he saw the drone flying outside his apartment.

"At its closest point from originally when I saw it, it couldn't have been more than a few feet from the building," he said.

He said he watched the drone fly up and down and around the building for around five to seven minutes before landing next to an LMPD cruiser.

"That's when I noticed the marked police cruiser there and subsequently saw the officer pick it up, load it up," he said.

What’s still unclear is the purpose of the drone’s flight.

WHAS11 News reached out to LMPD for comment and they said in response:

LMPD does not have any drones. The officer was off duty using his privately own drone. No LMPD policies have been violated. There is no further investigation.

Lainhart said he was concerned about his privacy since the majority of the apartment's windows stretch from the floor to the ceiling.

"If you're on your patio looking in, you can see all the way into the living room and kitchen and both bedrooms and master bathrooms," he said. "It's all openly visible."

He said even though the officer may have been off-duty, he still wants to know why the drone was flying so close to his apartment building. He said it was especially uncomfortable for him knowing he sometimes has his young nieces over.

"If that drone was operating, doing the same flight pattern, they would have complete visibility into that bathroom where my little nieces were bathing in," he said.

“The safety, security and privacy of our residents is our top priority at 800 City Club Apartments.We are disturbed that a drone has been flown around our building by an off duty police officer without expressed permission of our ownership and our residents.  We see this as a clear violation of privacy.This incident has been elevated to the highest level within our organization.”

WHAS11 News also checked the Federal Aviation Administrations flight map and the 800 building is within a no-fly zone.

The FAA released the following statement:

"The FAA is investigating this report to determine if any Federal Aviation Regulations were violated. We don’t speculate on potential penalties. However, the FAA's focus is educating drone and aircraft pilots about safe operations and the importance of complying with safety regulations.Please keep in mind that the FAA does not regulate privacy. We regulate drones and all aircraft operations."