Beshear says he will accept KHSAA's plan as students, coaches and parents rally for fall sports

The governor said he did not agree with the plan, but put responsibility on superintendents, athletic directors or coaches. 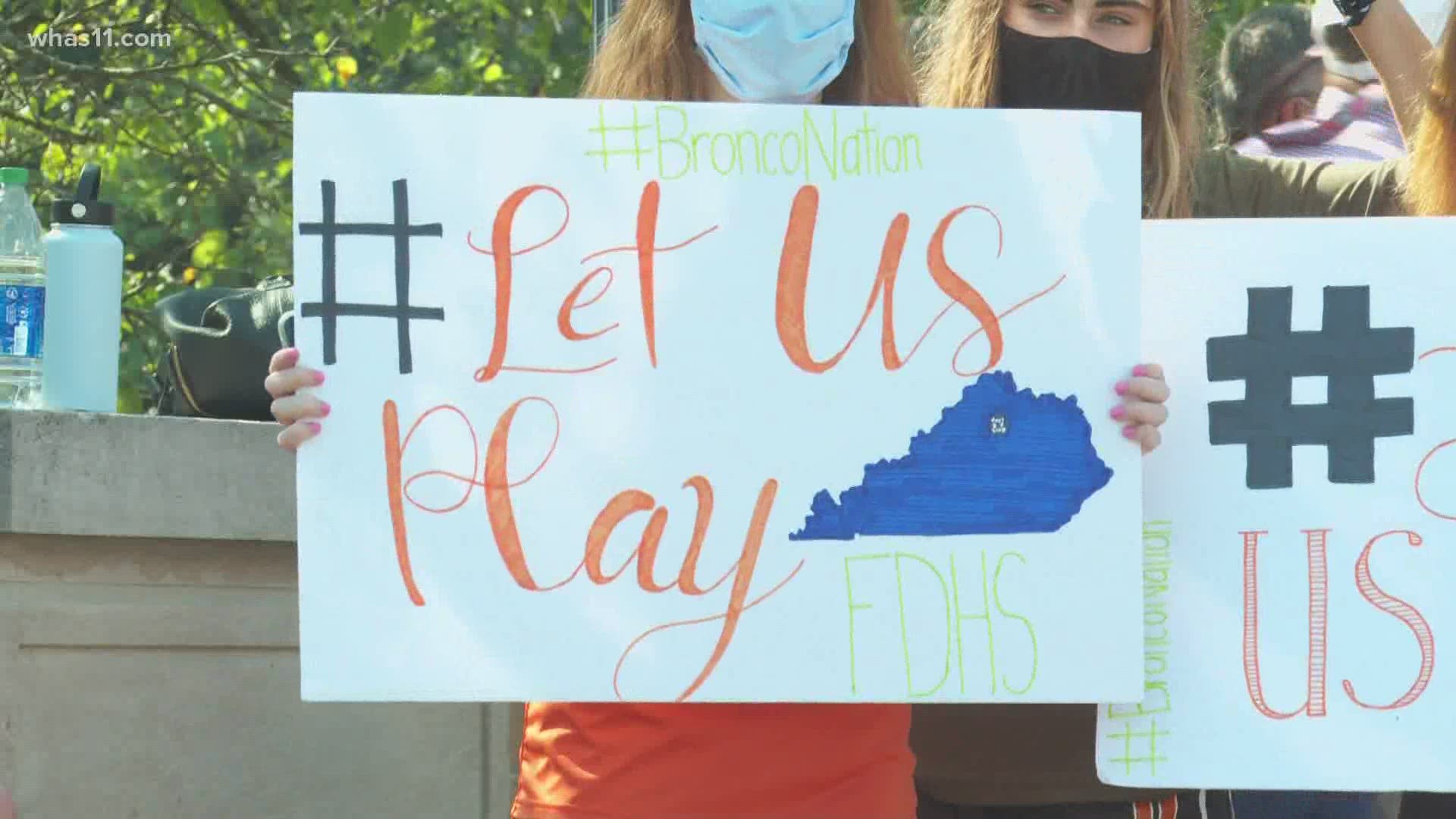 FRANKFORT, Ky. — Gov. Andy Beshear said he will not overturn the Kentucky High School Athletics Association's plan for fall sports, despite saying he did have concerns.

Beshear recommended students be kept from classroom instruction until Sept. 28, citing growing number of coronavirus cases, particularly among school-aged children, in recent weeks, but several school districts have already gone ahead and returned to in-person learning.

The KHSAA Board of Control considered two proposals at its last meeting that would have had some or all fall sports push their competition schedule back to Sept. 28, but they were overwhelmingly opposed. Instead, they voted to start competitions the week of Sept. 7-11.

Beshear said that he did not think the KHSAA's decision was "a good decision or wise decision," but said the state would need people other than him taking responsibility and making decisions as things begin to reopen.

"I have concerns...that by starting with some of the most high contact sports, we risk a shortened season, we risk what I think can be successful plans to get our kids back in school, that we risk every other sport that's going to follow," Beshear said.

The governor also noted the Southeastern Conference's plans for its student-athletes, mentioning its increased weekly testing and delayed start to the season.

"Every program that's going to start up, I want you to really think, are we testing our athletes? Are we doing everything to keep them safe? Are we putting them first," Beshear said.

"I hope that in Kentucky we can be more successful than in other places, but the outlook is not good," Stack said.

Stack also mentioned research from the Ohio State University that links COVID-19 with a rare condition that inflames the heart muscle.

"You can have sudden cardiac death because you have an irritable heart muscle," Stack said. "I hope this doesn't happen but it's just going to take one 16- or 17-year-old to drop dead on a sporting field before someone notices that it's not fictional."

Beshear said his administration will require transparency in athletics and in school systems across the state.

"No trying to hide positive," Beshear said. "Whether or not there's a big game coming up doesn't mean you get to argue with somebody over how many people are quarantined."

Still, the governor said the state must rely on other leaders to make responsible decisions for reopening amid the pandemic.

His decision not to overturn the plan comes after more than 100 students, parents and coaches went to the Kentucky Capitol to rally in support of having fall sports.

"Let each family make its choice," Hughes said. "A family can choose to not let their child participate because they feel it's unsafe or that the risk is there, but don't take that choice away from everybody."

More than a hundred students, parents and coaches are in Frankfort this morning hoping to get their message out about fall sports - they want to play. @WHAS11 pic.twitter.com/N9jdlxOA02

"My season got taken away and that did really stink," she said. "I didn't like it. It wasn't fun. It wasn't easy to get through that without having a season, but if I can get a season for my friends and the people I care about and I can go to their games and support them, I think that'd be a step up from what's going on right now."

Still, Beshear has voiced his concerns about KHSAA's plan and said he will not have his son participate in high contact sports this school year.

Superintendent Dr. Marty Pollio is expected to recommend a phased-in approach to fall sports with times based on each sport's contact level. Pollio's proposal, which includes an eight-game football season starting Sept. 18, will be up for discussion during Monday's board meeting.

JCPS said in the plan it would also consider additional safety measures including suspending practices or contests for any school or sport if there happens to be an outbreak of the coronavirus.