The Kentucky School for the Blind community came together to cheer on the school’s cheerleaders. 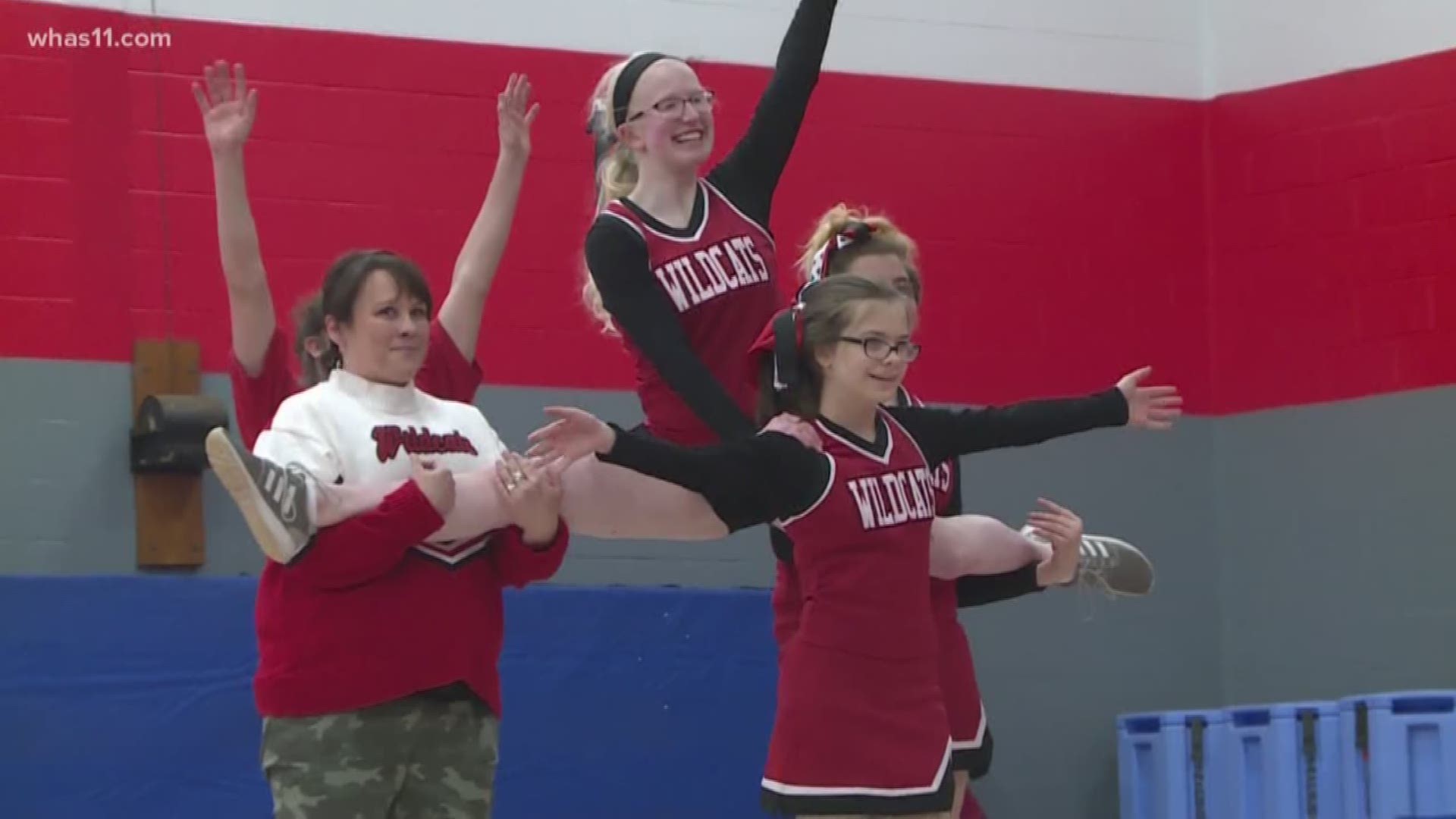 LOUISVILLE, Ky. — On a cold gloomy Wednesday students, parents and teachers walked through the doors of the Kentucky School for the Blind gymnasium and were greeted with smiles.

“Do you want pom-poms!?” a group of young people asked dressed in their cheerleading uniforms waving red and white streamers.

Some took a pom-pom and began waving it I the air, others simply made their way into the gymnasium. But either way, even if you couldn’t see the joy and cheer emanating around the building, you could feel it.

The music began to blare. The chant “Let’s go Wildcats!” began to permeate the bleachers. For about an hour, the Kentucky School for the Blind community came together to cheer on the school’s cheerleaders.

It’s obvious the joy this group of young people brings their school, but for some on the squad, cheerleading is about much more than jumps, cheers and cartwheels.

Corbin Gravil has only been cheerleading for a couple of years as he found the sport at a time in his life when cheer was much needed.

"April of 2015 I started going slowly blind,” he explained.

Corbin’s had been home-schooled by his parents, but they decided to enroll him in Kentucky School for the Blind after the diagnosis.

“It was a big difference not just going to a school but going to a blind school,” he said with a smile. “It was way out there. I didn’t even know it existed for a while!” he added with a chuckle.

Corbin had a background in theater and wanted to really push himself to get involved in his new school. So, he joined the cheerleading squad with no experience.

"It was pretty hard at first but I kinda embraced it,” he said. “And seeing all these other people with the same problem it felt like I was at home almost. I thought it would be a really fun experience to push myself to do something I've never done before."

This Wildcats cheer squad is made up of many new faces like Corbin. Head coach Crystal Johnson said that for some of the members, it was starting at the very beginning. Then, of course, with visually impaired students there are some unique difficulties.

“We do modify some things,” Crystal explained. “Hand over hand, and just being more descriptive and they are allowed to help each other out on the mat and everything else."

"I feel like we work on positioning a lot more than other cheer squads because people can't see where they're going so it's definitely a little bit different,” Corbin simply added.

But when it comes down to it, this group really faces a lot of the same challenges as most high school squads.

"Once you get a group of people together you've got a lot of big personalities so there's going to be some adventures,” Crystal says with a knowing laugh.

This year’s team experienced the ultimate adventure, as for the first time in almost 20 years, KSB took home the North Central Association of Schools for the Blind conference championship.

"I had to go to the hallway because I was in tears,” Crystal said. “They did amazing -- just blew my mind."

"We had our doubts, definitely,” Corbin added. “We all stood strong at the end and it was great."

And it was Corbin who stood atop the competition winning the honor of most outstanding cheerleader.

"It was amazing!” he said. “I just stood up and cheered and everyone was screaming and it was great. We can do just as much as you guys can."

This is the school’s 16th conference cheerleading championship, but the entire sports department is finding success as this year, the girls track and field team won its first-ever conference title.