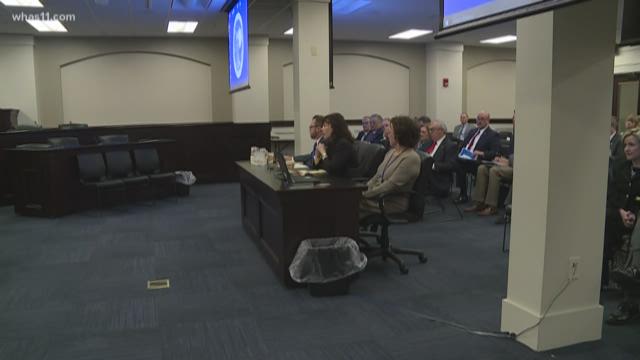 Tuesday, a State Supreme Court Justice made a plea to lawmakers to find the funds as the remaining members of the Kentucky High Court sat in the audience in support.

Some Kentuckians impacted by the cuts, according to Justice Michelle Keller, are those claiming to have been victimized by Eric Conn. Conn is the Kentucky lawyer recently captured in Central America and returned to the Bluegrass to face justice.

Justice Keller said that many of the thousands of potential victims are financially destitute, in need of civil legal aid lawyers to obtain benefits. The Governor's budget plan allotted zero dollars for the civil legal aid program.

All 7 of Kentucky's Supreme Court Justices sat in on Tuesday’s committee hearing. At stake are $750,000 in funding for the Access to Justice Board which is one of the 70 program cuts announced by Governor Matt Bevin.

Those fighting for the funding say what's really at stake goes well beyond dollars, it strikes at the effort to help those less fortunate seeking justice with nowhere else to turn.

“The greatest number of cases that we do, across all four programs, are domestic violence cases which appear in Family Court,” Joshua Crabtree, Executive Director for Legal Aid of the Bluegrass, said.

Four regional civil legal aid agencies do receive outside funding, Justice Keller explained, but state funding makes it possible for them to handle more cases and the need goes well beyond those for whom they can provide even with current funding.

Justice Keller said 2,500 Kentuckian veterans were provided civil legal aid services, through the programs, from 2016 to 2017.

She also pointed to recent news involving Eric Conn as adding to the need for the civil legal help for those in poverty.

“We just heard, I think it was yesterday. that there's another almost 2,000 disabled people in Kentucky that are looking at losing their benefits because of the bad actions of one lawyer and those benefits will be terminated if somebody can't get those 2,000 people in the system and explain their cases.”

Those alleged victims of Eric Conn, civil legal aid attorneys explained, were helped by the four agencies when the Conn case developed.

Committee Chairman, Louisville Representative Jason Nemes promised to try and find a funding solution, saying, “You guys take care of the least among us, and I want to thank you guys for that. We'll do what we can do. It's very difficult because there are a lot of needs and there's not a lot of resources but we'll do what we can do and your testimony here today is very helpful."

Kentucky lawmakers continue to debate aspects of the budget proposal but historically they reach an agreement late in the General Assembly which is slated to end on April 13, 2018.