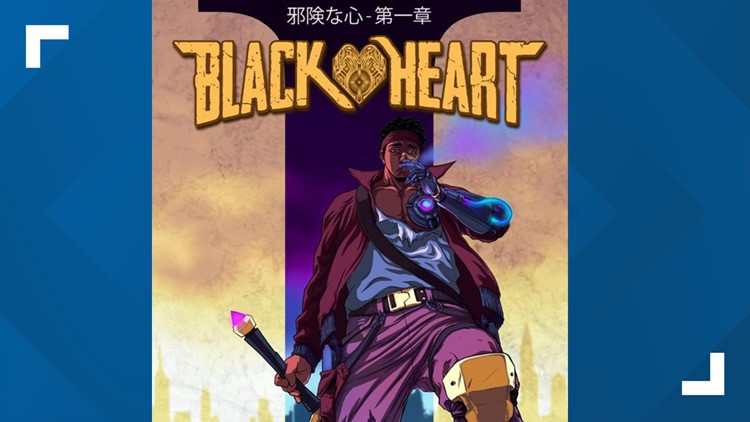 LOUISVILLE, Ky. — A local artist created a sci-fi comic book and self-published it in hopes to inspire others.

Julian Thomas is a local rap artist and storyteller who, through the love of his music, created a character in hopes to release on his merchandise. However, through the creation of this character, birthed a new focus for the young creator.

Thomas says his sci-fi comic, Black Heart, is about a man caught between the only woman he’s ever loved and the only dream he’s ever had.

“It’d be easy to categorize Black Heart as a post-apocalyptic, action/adventure story but those attributes, while still important, are only surface level. At its core, Black Heart is a love story and a tale of self-discovery” Thomas explains.

His self-publishing company, Vanguard, came to fruition through ideas that were engrained throughout his rap career.

“Independence, ownership, and creative control were deeply engrained in me… that bled over into Black Heart… It’d be cool to work with a major publisher one day, but I’d like to see what I can do on my own first” Cannon says.

Once Thomas started Vanguard, he quickly realized that there were plenty of other people that could use his help.

“So many people message me saying they wish they could do their own comic or write a book and I’d ask them— why wish? Do it! So, if I can be that spark that pushes new creators forward, why wouldn’t I be? This is way bigger than me, the world needs to hear this stuff. So, I created Vanguard. Blackheart is our first release, but later we’ll start reaching out to other authors” Thomas stated.

Black Heart releases December 8. There will be a book signing at Heroes Comics 4-7 p.m.

Natural hair discrimination: Kentucky’s upcoming legislative battle and the history behind the hate