"Happy Derby Day" was a tradition with the late John Asher. 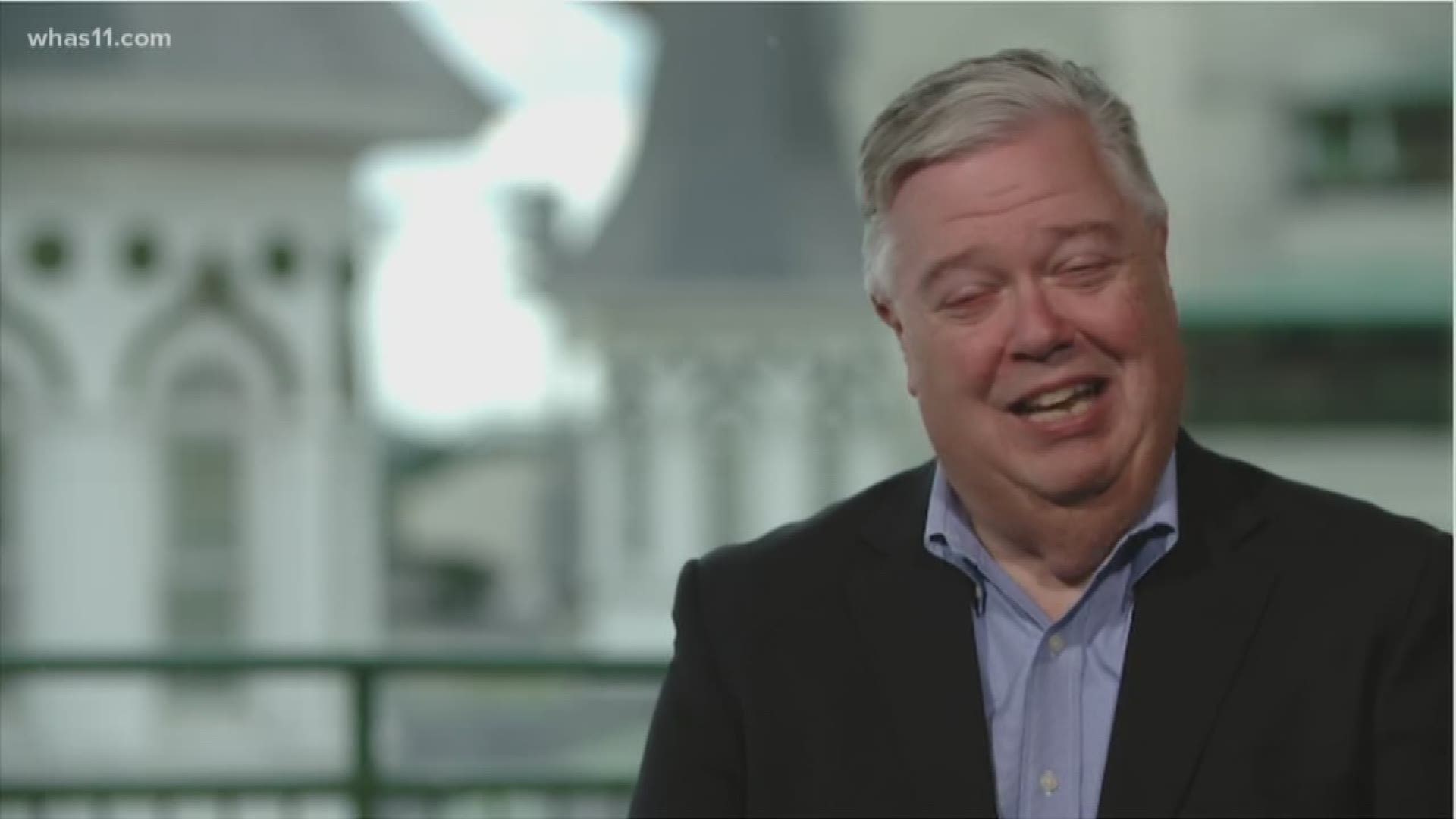 John Asher’ s simple wish to everyone, “Happy Derby everybody”, became a treasured moment for his boss on the day steeped in tradition.

Kevin Flanery, the president of Churchill Downs got choked up when he told us of the moment he will miss on Derby day, “Nothing grand, but it was a tradition.

For the first time in more than two decades, Asher will not be present as the confident communications chief of the Kentucky Derby. He was everywhere.

I've heard a lot of great stories about John's early love of Churchill and horse racing, but never the one his younger brother Tim told me about the boys as kids living in Leitchfield, Kentucky.

He said, “Our mother would put him on the Greyhound bus, he would come to Louisville, our uncle would meet him at the bus station. They'd come to the track. This is when he's ten, twelve years old.”

That passion is why we were all left stunned after his sudden death of a massive heart attack at the age of 62, on vacation with his family last August in Orlando.

His wife dee, his daughters Heather, Erin, and Emma and his grandsons Cameron and Caden. Tim says, “It has been absolutely amazing. I wondered how someone in 62 years could have touched as many souls as he did. When John passed, I heard all these things about how great John was, and I agree he is great, but he had to have Dee, or he couldn't be great.”

His wife so understanding, John appeared on the air with WHAS11’s Dave Conrad in 1993 carrying a beeper, as his wife was days away from expecting their daughter.

Churchill commissioned a painting of Asher. The portrait done by Kacy Jackson, a local artist, is being hung inside the communications office.

With this portrait, they're making sure Asher has his place next to the legendary Colonel Matt Winn, the famed marketer and Churchill Downs executive who positioned the young Kentucky Derby as the best horse race in America.

No one in the track's long history, until now, has ever been compared to Winn.

Flanery agrees, “Matt Winn and John Asher are the two iconic voice figures in our history, that's who the public knows.”

Matt Winn's family in 2002 gave Asher a framed photo of Winn with the message, “Only wish he could have known you, John!”

Darren Rogers, whom Asher hired at Churchill Downs as senior director communications says, “When John walked into the room he commanded attention. When you walk into the media offices here at Churchill it'll command attention.” 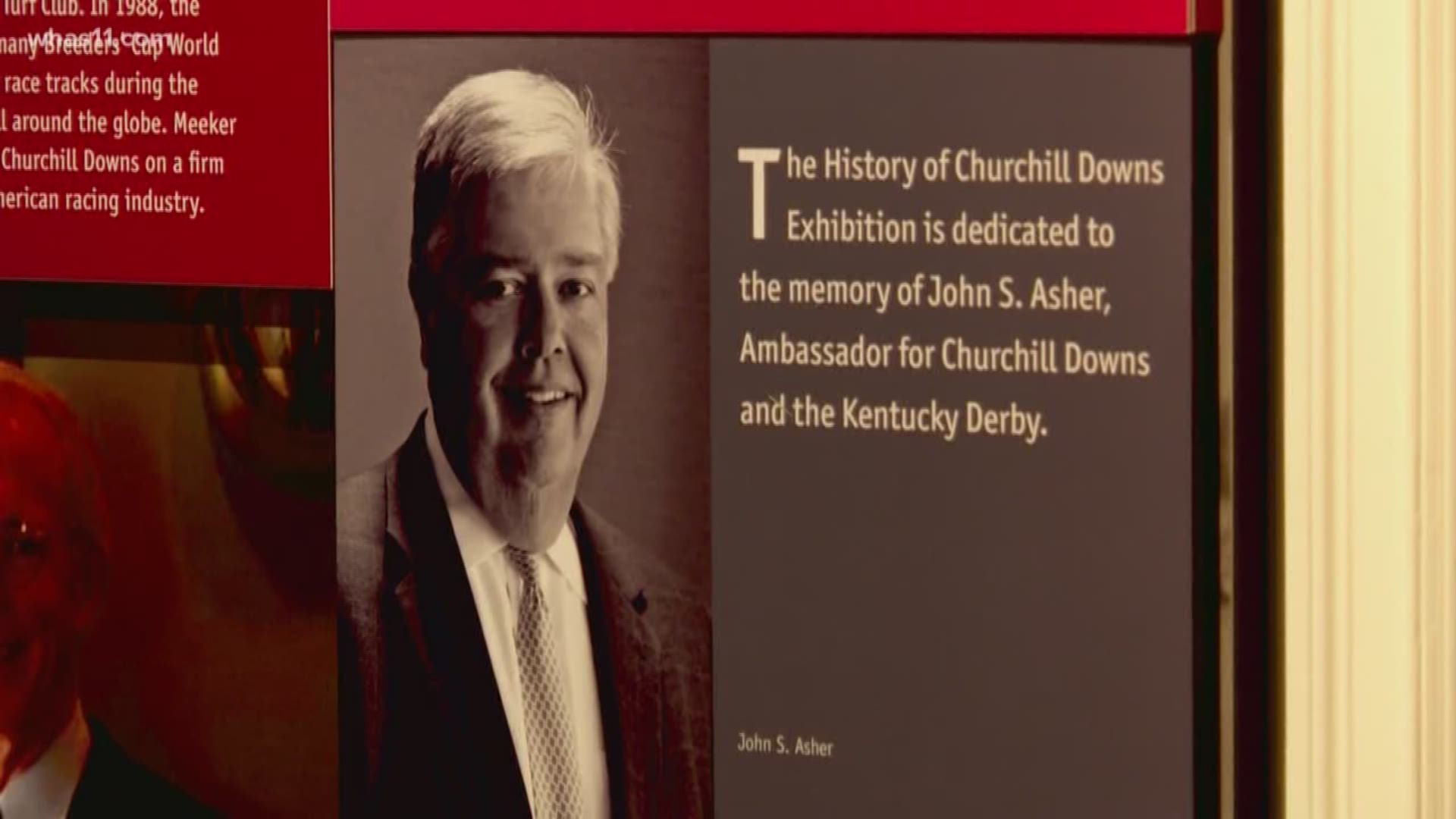 Flanery remarked, “I’m not kidding when I say once a month and now once a day, I’m getting calls from people telling me stories about how John impacted their lives. Calling us to say, ‘can we do something to honor John because he was so good to our organization.’ You knew it. But it’s been so great to see it.”

The recorded message is staying and Asher's job? Flanery decided on day one, it will never be filled, impossible to replace.

He says, “Just like now as I’m sitting here thinking, what would John say? How would he handle this? And that's our message to the team. Think about how John handled things. Think about how he treated people.”

Flanery who grew up near the track, was the perfect boss for Asher, remembering, “We would rib each other. I would tell John he can take a 3-minute speech and squeeze it into 8 minutes. He had great stories and he liked to tell them, and he'd give me grief about answering a yes or no question in ten minutes.”

Leach says, “Turns out one of his daughters had a volleyball game in Louisville, and he jumped in the car after the volleyball game, drove to Lexington listening to our broadcast. He pulled into the stadium parking lot as the game ended and he just wanted to be there for the celebration. So the first person I saw was the big ol’ smile and then he was heading out onto the field to hug everyone.”

I had to ask Flanery, with his love for the place, did he ever sleep there. He says, “YES! Sometimes unintentionally.

After a long day I'd go in and check on John and give him a nudge and wake him up. John was here all hours of the day and night.”

His enthusiasm for Derby season never went away. His hard work infectious to the people he hired, Rogers knows the best, “God broke the mold when he made John Asher. There were so many great qualities about this man that if we could all take just a little bit of john we'll all be better people.”

A generous spirit with that hearty laugh.

He would tell me, “Doug don't end this report on a sad note!”. So John, here you go, from Flanery, “I have a lot of stories I like to tell tour groups. I say 80 percent is true, the other 20 percent John Asher told me. Somebody snitched on me and told John. I said don't worry John, I don't tell them which 20 percent.”

Churchill Downs will honor Asher with a ceremony at 2 p.m. Saturday.