"I know I represent something different to a lot of people being the first woman to take this title. So, I’m not going to short change that.” Yvette Gentry said. 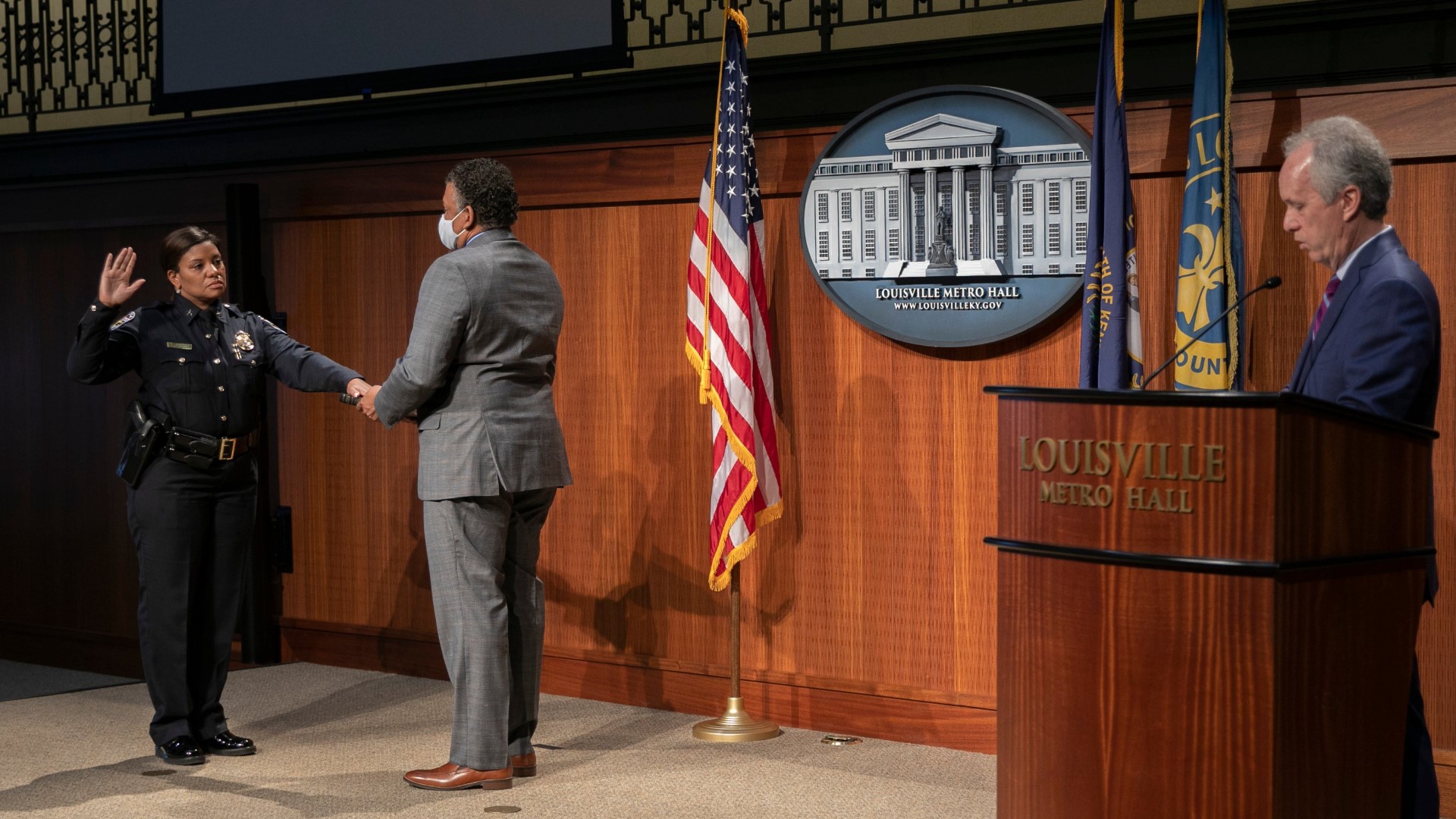 LOUISVILLE, Ky. — Louisville native and retired Metro Police veteran Yvette Gentry made history Thursday morning when she was sworn in as interim chief of Louisville Metro Police, becoming the first woman and just the third Black person to hold that title.

"I know I’m interim, but I know I represent something different to a lot of people being the first woman to take this title. So, I’m not going to short change that," Gentry said during Thursday morning's ceremony. "My niece Aaliyah is here on the front row. She’s been wanting to be a police officer her whole life. So, I understand the responsibility, the things that you all are putting on me are nothing compared to the fact she’s looking at me for the type of example that she deserves to have in her auntie."

But while the significance of the moment has not been lost on her, to Gentry, making history is not as important as making change.

"I hope that's what people expect from me," she said in an interview with WHAS11 earlier this week. "I don't have lightning in a bottle that's going to make everything fixed overnight, but I promise you we'll be better on the other side of my leadership."

Gentry retired from the department in 2014 after 24 years but returns to lead a police force that has been under constant scrutiny this year for its handling of the death of Breonna Taylor, who was shot and killed by three LMPD detectives, and the protests that have followed. Gentry is the third chief since Taylor was killed in March after Mayor Greg Fischer fired Steve Conrad and Robert Schroeder, the interim chief, retired at the end of September.

Gentry has promised transparency and openness to both her officers and the community and had the boards covering her office windows removed after she was sworn in.

"I'm just asking that I know you may have a lack of trust and you're out there in the streets screaming but I'm listening to you," she said. "I feel like there are people kicking down a door that I'm already opening for you."

This comes as no surprise to Salim Shahid, the former program director at the Shawnee Boys and Girls Club. According to Shahid, Gentry was a frequent visitor and would hold programs for the children.

Shahid understands working with children and leading a police force are very different, but he said her passion for the community that she displayed at the Boys and Girls Club can carry over. And the historical significance of a Black woman in charge is also not lost on him.

"It makes me very proud, someone I can definitely turn to my daughters as well as my nieces and look to her as somebody as an example in this community and someone they can see that looks like them," he said.

Gentry said she anticipates serving as interim chief for the next four to six months until the city is able to find a permanent chief. She said she will also be there to help the new chief during the transition.