Two cancer patients got the name "The Infusion String Band" after the chemotherapy infusions they were receiving while playing music together. 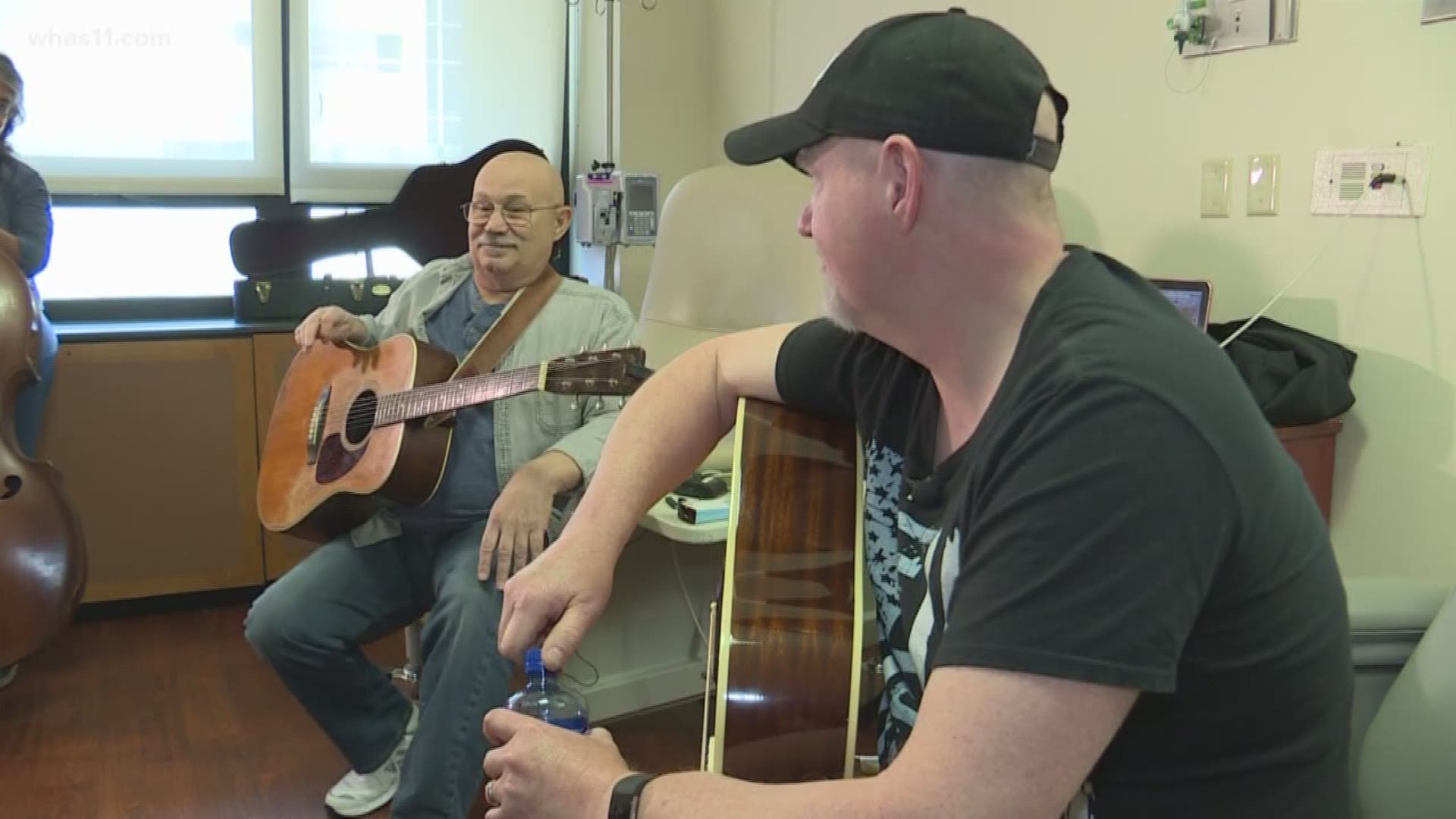 LOUISVILLE (WHAS11) – They say music heals the soul. Dave Shattuck and Roger Slusher will tell you it heals much more than that.

"We were hooked up to IVs and the whole nine and picking and singing the whole time,” said Slusher.

The two men met at Norton Cancer Institute last year. Roger was fighting prostate cancer while Dave was tackling his third round of lung cancer.

"My doctor told me if we'd been talking two years ago, he'd be saying I'm sorry instead of let's go get this,” said Roger.

"I never gave it a thought until I got diagnosed,” said Dave.

In order to endure the hours of chemotherapy, Dave and his partner Sonya Cotton brought their instruments to pass the time. Soon nurses realized they had two patients who loved playing music and arranged for Dave and Roger to receive treatment every third Friday together.

“I think on my second treatment is when we hooked up,” said Roger."You don't want to be here. You are going through something. You are putting poison in your body trying to kill something and it's not the greatest of surroundings but if you are able to do something that you love and maybe make a few other people feel good too – hey I'm all about that.”

RELATED: Louisville therapist reveals the power of the beat through music

Soon the men got the name “The Infusion String Band” after the chemotherapy infusions they were receiving while playing music together. Doctors, nurses, patients and visitors couldn’t help but stop in to hear them. As much as they enjoyed playing for an audience, Roger and Dave say the music was really more for them.

“It's not really what they think it is. We are really more greedy than that because we just love it. It lifts your spirits, soothes your soul and it makes- it makes life better,” said Dave.

Now both Roger and Dave are in remission trying to get back to life before cancer. Some days are harder than others. They don’t have the energy they once and tend to tire easily. But whether it was the chemo or the music or maybe a combination of both, they are both happy to be alive and cancer free.

Norton Cancer Institute is one of many cancer centers across the country that offer music therapy.

Brian Schreck is a board-certified music therapist who joined in on many of the jam sessions. He spends his time lifting the spirits of patients by playing music for them or teaching them to play instruments themselves.

“As an outsider, I get just as much joy as they do out of it. Music is a healer. It certainly has the power to lift you up and give you the energy you need to fight,” says Schreck.

Dave and Roger agree it is the love of their families and the power of music that brought them both into remission.

“It meant the world to me especially to be able to play with somebody. Just sitting and picking by yourself, that’s a little different. People walk by and stick their heads in every once in awhile but when you get a group of people together playing the same stuff and really enjoying it, it’s really something special,” said Roger.