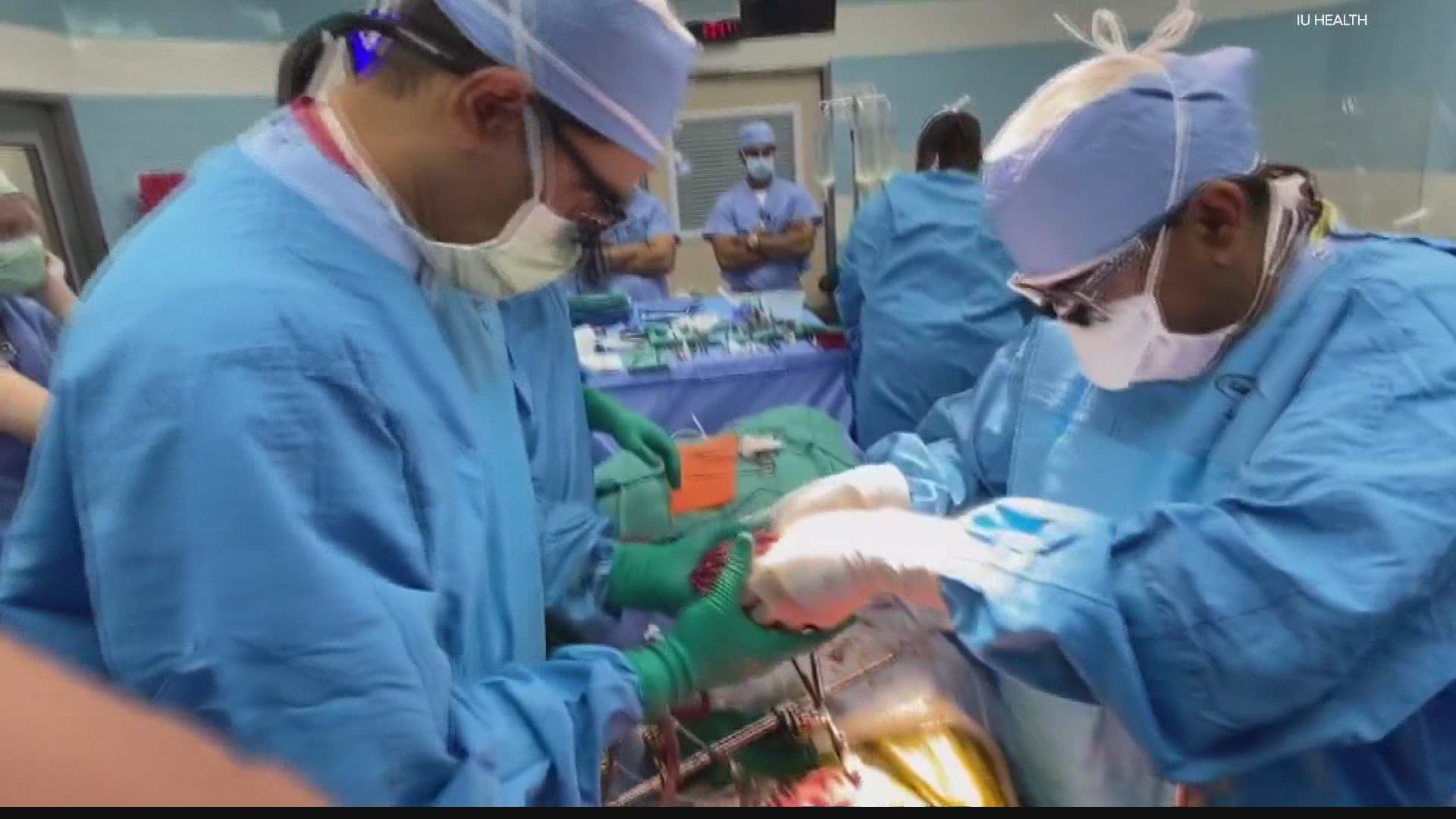 INDIANAPOLIS — IU Health transplant surgeons are celebrating after performing the state’s first living donor liver transplant in 20 years, and the recipient couldn’t be more surprised it was a first cousin who stepped forward.

Kelly Kincade, 34, is an attorney in Greenwood diagnosed with autoimmune hepatitis in 2013.

“Basically, my body thought that my liver was not my liver and attacked it, and for all intents and purposes, killed it,” Kincade said.

Doctors told her she would need a transplant to replace her liver, which is vital to break down toxins, process carbohydrates, fats, proteins and create what’s needed for her blood to clot. It meant she’d have to wait until the right combination of factors put her at the top of the list.

In the U.S., livers are allocated based on a variety of factors including your proximity to a donated organ, and a MELD score, which in part scores your organ functionality.

“My MELD score was always very low; my kidneys were always functioning well, which is something that they take into account in the MELD score," Kincade said. "I was told by one of my doctors that because of my short stature and because I’m a woman, I just didn’t have enough muscle to get the score high enough."

Dr. Shekhar Kubal is the surgical director of the IU Health adult liver transplant program who estimates there are nearly 14,000 patients annually in the United States waiting for a liver from about 8,000 deceased donors.

“About 30 percent of patients will either die or will be removed from the list because they're too sick,” Kubal said.

But living donors are an option, making up 14 percent of the liver transplants in the U.S. so far this year. The team that first performed living liver transplants at IU Health is no longer in place. Now after a 20-year gap, Kubal and his team reinstated the program and offered the living donor option to Kincade.

She knew she would be the IU Health team’s first living donor case, and she was receptive. She was tired of missing work, her health declining and simply waiting.

“It would probably have been another 10 years of me just progressively getting sicker,” Kincade said.

Her father volunteered to donate, but surprisingly to Kincade, it was her younger first cousin Paul Stringfield, 23, who was adamant he was the solution.

“Growing up, we weren't really that close," Kincade said. "I would see him at family gatherings and say 'hi.' But again, he's incredibly shy, so he would keep to himself. He actually told his mother, ‘what are you going to do just let her die? We, I mean, I have to do something.’ And so from that moment ... he's been saying, I'm going to do it."

On July 20, at IU Health University Hospital, Kubal and his transplant team successfully removed nearly 60 percent of Stringfield’s liver and transplanted it into Kincade.

“It is a big deal. It has taken a lot of effort for our team to put this program together and now we're able to help…patients such as Kelly which we were not able to in the past, so that's a big, big deal for us” Kubal said.

Since Kincade’s transplant, Kubal and the rest of the IU Health team performed a second living donor liver transplant and are aiming for 10-20 more per year as early outcomes are promising.

"He’s doing fantastic, he's gone back to doing everything that he was doing before, including fishing, he loves fishing,” Kincade said.

Kincade is anxious to get back to work and said she feels better than she has in a decade, adding she forgot what it was like to feel normal.

If you are interested in learning more about living donor liver transplant at IU Health, click here.

Learn more about being an organ, eye, and tissue donor at the United Network of Organ Sharing website.