Indiana cheer team is where 'disabilities fade and abilities shine'

The special needs co-ed cheer team at Royalty Athletix is called the Angels and includes ages five and up. 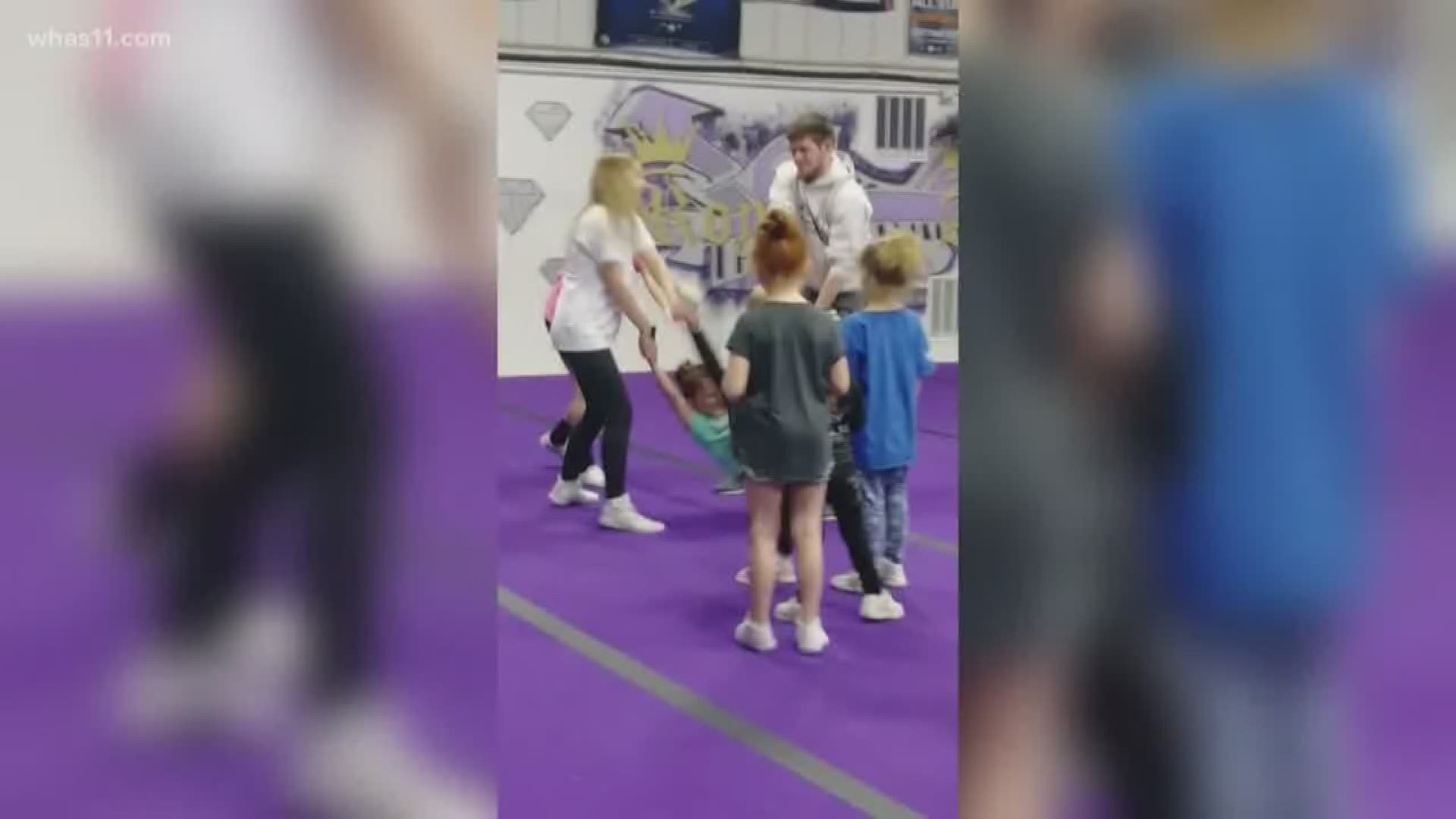 COLUMBUS, Ind. (WTHR) – Watching from the sidelines of her daughter’s cheer practice, Millie Totten said she was crushed when doctors told her that her child would never be able to walk.

“Mayleigh has two duplicate chromosomes which has affected her to have low tone," Totten said. "So, when she was a year old, she was kind of a like a new born baby, she was floppy."

“To go out there and see her when I heard doctors say she may never walk,” she said as tears welled in her eyes. “She may never walk? She’s out here flying and doing stunts. It’s amazing,” Totten added with pride.

Totten’s daughter, Maleigh Hardwick, has been on the Angels team for three seasons.

“I like it,” she said giggling. Her favorite part of cheer is doing stunts.

Totten said Royal Athletix gym in Columbus was a place that told her “let’s try it,” when all she heard from others was “she may not be able to do this.”

“All of these kids on the special needs cheer team at Royalty Athletix are showing the naysayers that they can," Totten said.

“Everyone is an athlete here, so what can excel the athlete into becoming the best version of themselves," Gym owner Brittany Carpenter said.

The special needs co-ed cheer team at Royalty Athletix is called the Angels and includes ages five and up. The eldest person on the team just celebrated her 25th birthday.

“It can be any element of a special need (physical of otherwise),” Carpenter said. “It’s where disabilities fade and abilities shine."

“We are a faith-based gym, so Royalty Athletix is based off of that we are all God’s children, and the best of all are our awesome Angels,” Carpenter said.

The Angels program started in 2015, as part of a senior class project.

“We opened the gym in May of 2015,” said Carpenter. “And BCSC (Bartholomew Consolidated School Corporation) does senior projects.”

Senior Cassie McDonald said she wanted to do a special needs program at the gym.

“It fit the direction we wanted to go in," Carpenter said. "So, we helped train her, and her mothers helped out, and we saw this huge influx what it did for even our non-special needs athletes. It really pulled a sense of team, loyalty, comradery, and love for everyone."

As fellow athletes watch and cheer on the Angels during their in-gym performance, it’s clear Royalty Athletix is much more than cheerleading.

“It’s amazing,” she added filled with pride and emotion.

Coach Fateley said cheer can be a form of conditioning for some of the athletes.

“It strengthens them because it’s a type of exercise,” said Fataley.

Totten says it has helped strengthen her daughter's core muscles.

Fifteen-year-old Zoey White said for her, cheering can sometimes be painful.

“I have really bad scoliosis if anything it hurts a little bit but that’s okay," White said. "A good state of mind puts you in a good state of physical. It makes me happy. I have a lot of fun doing it so I think of course it makes me more happy physically as well."

Fataley says watching her athletes achieve their goals is the best part.

“Just watching them and a feeling of being there and watching them grow is a feeling within itself. We have kids that have been in this class that end up moving to the competitive cheer squad,” said Angels Coach Tammy Fateley.

Coaches and parents agree that like many sports when an athlete achieves their goal it builds confidence. And like many team sports, it also fosters lasting friendships.

“Me, Lilly and Anna are best friends,” said Hardwick, as her friend Lilly smiled from a few feet away.

“I don’t have a ton of things that I can do because of my own disability, physically. So, it’s really nice that I can do something like this and bond with my sister (who is also on the Angels),” said White.

The Angels practice once to twice a week, and coaches say they hold monthly performances. The athletes usually receive awards for participation or their performance.

“It makes me proud,” said Totten.

“It’s a good feeling, everybody else is smiling and cheering you on and listening to all the people saying ‘you did so good and all the other cheer teams cheer you on, it feels so good,” said White with a big smile.

As the Angels cheer team wraps up their in-gym performance, they stand in a circle, bring their hands in and count down from three.

They then head over to another part of the gym to finish out practicing a second routine. After practice, they usually enjoy a snack and socialize. On this particular Tuesday, they celebrated athlete Sarah’s birthday.

Moms wear Angels T-shirts with the words “Cheer mom” on the back.

Siblings, parents, and athletes are all smiles.

Through stunts, tumbles, and cheers, the Angels are showing anyone who says they can’t, that clearly, they can and they will.

Their next performance will be on Feb. 2 at the Indianapolis Convention Center.