Workers at Churchill Downs’ backside voice concerns, many are immigrants who have worries regarding statements by President Donald Trump. 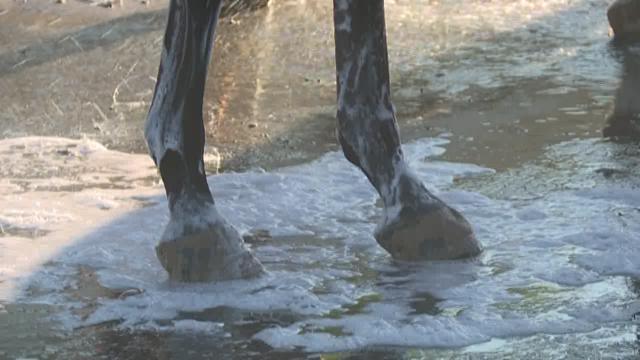 LOUISVILLE, Ky. (WHAS11) – Eyes around the world will watch the 143rd Kentucky Derby which it truly is an international spectacle. But this year there's a new anxiousness weighing on the hearts and minds of some of the key players at Churchill Downs.

The Latin influence on this sport is undeniable. Jockeys born in Latin countries have won more than 20 Kentucky Derbies and hundreds more each year work in the shadow of the Twin Spires.

But this year one topic is weighing on the minds of many. It's a topic most won't discuss openly. Of those I approached, all held the same feelings but only one would allow me to record their voice.

"People scared, you know? Scared”, a veteran worker who asked not to be identified, said. “They're scared because I don't know what's going to happen in the future even.”

Political rhetoric regarding immigration policy, specifically coming from President Donald Trump, has troubled many workers. Even those who are documented to legally work racing season, Kentucky Derby veterans, sense the anxiety.

We approached Governor Matt Bevin and asked what he would say to those who are concerned, who heard what the President had to say and it made them nervous?

“I has clearly created a sense of chill within this community”, answered Governor Bevin. “I had a good conversation with Todd Pletcher the other day just about this exact issue. There are a lot of people who are nervous and there are many people who are immigrants, some here legally and some not here legally, who work in this industry. And it's not just this industry, it's our entire agriculture industry, it's our crops, it's our dairy farms, it's our hog farms, it's a whole lot of places.”

The Governor added, “This is just a reality. We need to ensure that we have safe, fast, legal expeditious immigration. We need people to be here, to be able to work, but we also need to have good worker policies as well. I think clarity is what we need and we need it soon.”

For those working the backside, one thing is clear, going back to their home country is not an option.

"You know, what are you going to do”, the anonymous worker asked. “The future for your kids is in the United States."