The swollen river is expected to reach 28 feet in Louisville, which is around 16 feet deeper than normal. 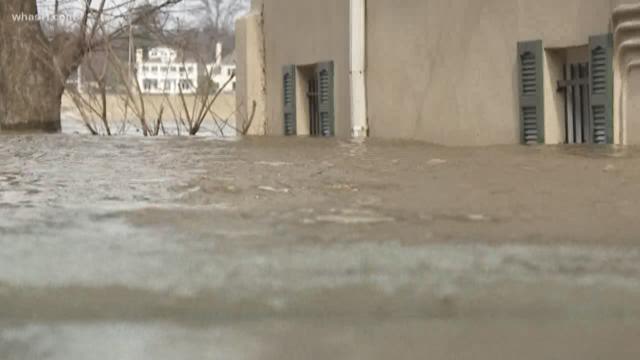 LOUISVILLE, Ky. (WHAS11) – People living along the Ohio River are bracing for a long couple of weeks as the river bloats to flood levels.

The swollen river is expected to reach 28 feet in Louisville, which is around 16 feet deeper than normal.

Monday homeowners along River Road loaded their belongings into trucks and trailers as the river began to spill over into their yards and the lower levels of their homes.

“They’re getting ready to sandbag the doors. Everything’s out,” said Donna Ward as she helped family and friends prepare their homes to take-on water. “It’s a disaster for everybody physically and mentally. Getting it loaded, trying to save your property and get it out of here.

Workers at the Bearno’s By the Bay restaurant at Limestone Bay Yacht Club spent the morning loading everything inside the restaurant into a large trailer that was hauled away from the rising flood water.

“We’re going to end up with probably 5 or 6 feet of water inside the building so everything has to go,” explained Charles Ochsner, president of Limestone Yacht Club. “If it’s inside it’s coming out. We can leave nothing.”

Louisville MSD said 10 of the city’s 16 pump stations were pumping as of Monday afternoon, but officials expect as many as 15 could be pumping by Saturday.

Officials are reminding drivers to avoid driving through flood water and pay attention to road closures, especially on and around River Road.