Ahead of the Monday start to the Derek Chauvin trial, George Floyd's family and supporters gathered for a vigil and rally. 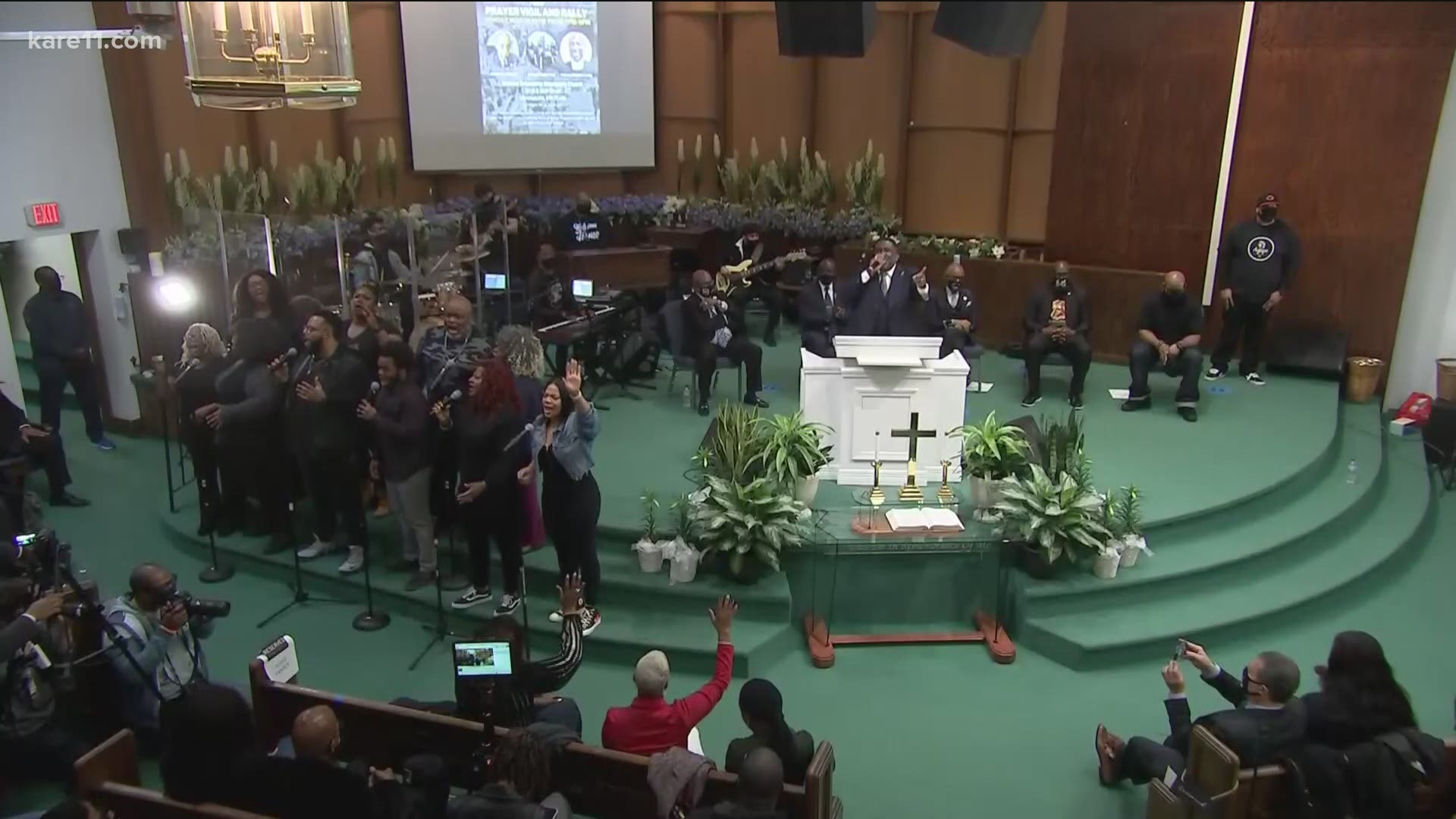 MINNEAPOLIS — The family of George Floyd and two national civil rights leaders gathered in Minneapolis the night before the trial of the former Minneapolis police officer charged in Floyd's death.

Opening statements in the Derek Chauvin trial begin Monday. Chauvin is charged with second-degree murder, third-degree murder and second-degree manslaughter in Floyd's death. The images of Chauvin's knee on Floyd's neck were captured on video and shared worldwide, sparking global protests around race and police brutality.

RELATED: 'You changed the world George': Floyd's memorial service in Minneapolis marked by calls to action

The night before the official start of the trial, Rev. Al Sharpton and civil rights attorney Ben Crump joined the Floyd family for a prayer vigil and rally beginning at Greater Friendship Missionary Church in Minneapolis.

"The United States' ability to deal with police accountability is on trial," Sharpton told a large group of assembled news media before the vigil.

George Floyd's brother, Philonise, was among the many relatives in attendance.

"[Chauvin] took the soul out of my brother's body, as he begged for his mama. He said, 'tell my kids I love them.' No man should have to do that," Philonise Floyd said. "I need justice for George. We need a conviction."

Crump represented the Floyd family in a civil suit that was just settled for a record $27 million with the city of Minneapolis. Appearing with Rev. Sharpton and the Floyd family, he pushed back against Chauvin's defense team, which asked the judge unsuccessfully for a delay in the case due to the settlement.

"I don't know where that is written at, that Black people in America can't get whole justice?" Crump said. "That we can only get partial justice?"

Ben Crump, addressing the $27 million civil settlement with Minneapolis, says Floyd deserves “full justice” as the criminal trial continues Monday. “How can you look at that video and say that Derek Chauvin did not commit a criminal act that killed George Floyd?” @kare11 pic.twitter.com/EuWlCh3RBX

Opening statements for the trial begin Monday at 9 a.m., after nearly three weeks of jury selection. Fifteen jurors have been selected to hear the case, but one will be released Monday once the other 14 are sworn in. Two are alternates, who will hear the case but will not deliberate unless they are needed.

“My brother, he didn’t ask for this... think about my brother every day, every night, I think about his kids and the next generation’s kids... I need justice for George. We need a conviction.” — Philonise Floyd pic.twitter.com/4Eqr4UbtI7

RELATED: What we know about the jurors in the Derek Chauvin trial

Rev. Sharpton and the National Action Network said in a Friday announcement about the rally, "NAN is committed to fighting for justice for the Floyd family and, as always, to rallying against the repeated, currently sanctioned violence against Black people by police officers."