The court has chosen a panel of 15 jurors, which includes a final "temporary alternate" selected on Tuesday. 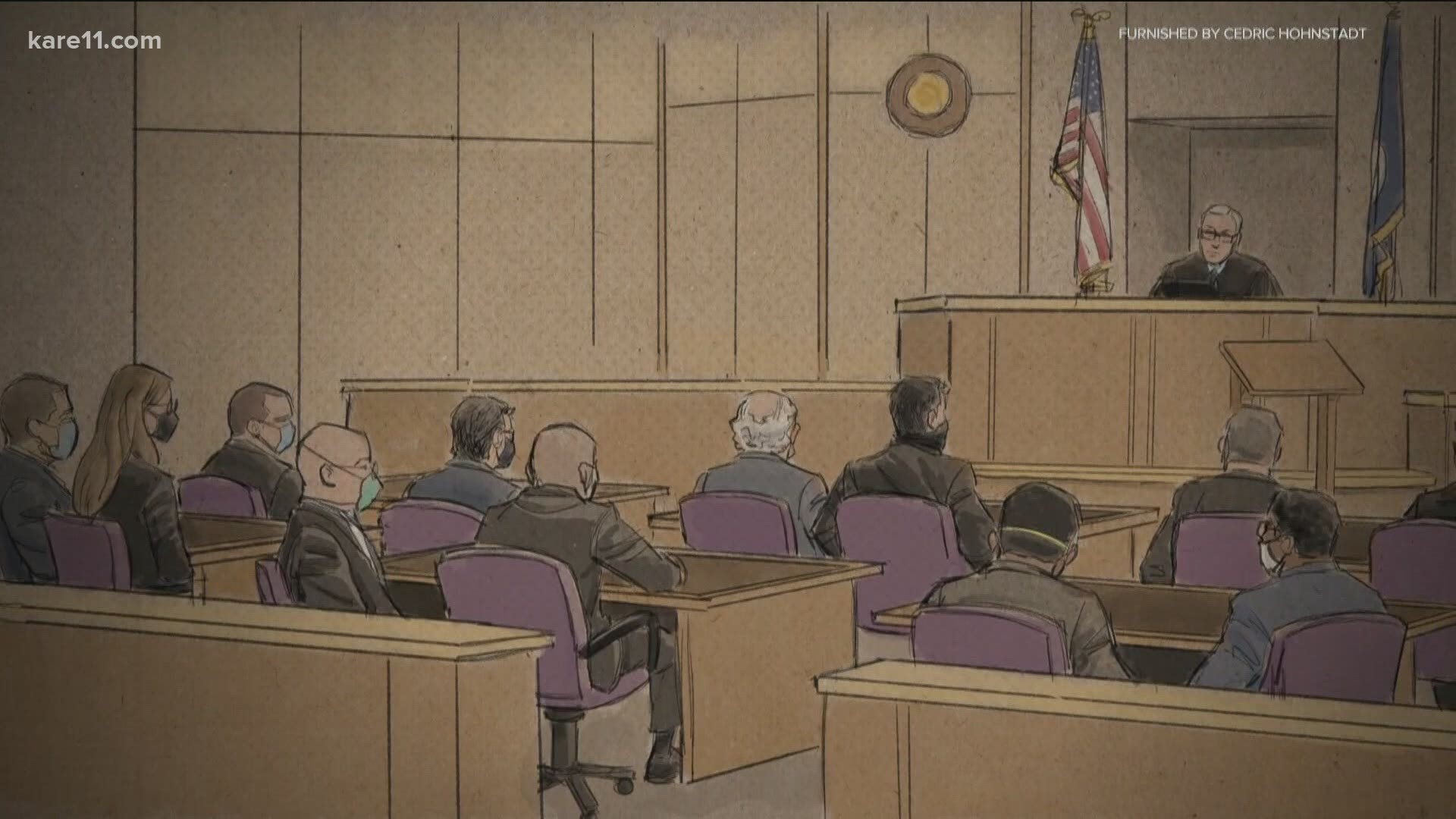 Jury selection concluded Tuesday morning in the trial of Derek Chauvin, the former Minneapolis police officer accused in the death of George Floyd.

Opening statements are scheduled to begin next Monday morning.

The court selected a 15th person on Tuesday to serve as a "temporary alternate" for the panel. However, Judge Peter Cahill told the court that only 14 jurors would be seated on Monday; the 15th is considered to be a backup should anyone leave the panel before then. If all jurors arrive as scheduled on Monday, the judge said the 15th person would be excused.

Judge Cahill said he would not fully release the jury pool until all jurors have been sworn in on Monday.

Juror #131 was the final person selected for the panel during Tuesday morning's questioning. A white man in his 20s, he told the court he works as an accountant.

Of the 14 jurors previously selected, two are white men, three are Black men, one is a Black woman, two identify as multi-racial women and six are white women.

Cahill says, "All right we have 15. Fourteen will be seated. that's all we have room for. The 15th will be excused on Monday. The whole point of this 15th juror is to make sure we have 14 when we start.

RELATED: What we know so far about the jurors in the Derek Chauvin trial

Two weeks of jury selection came to a conclusion late Tuesday morning, after the court selected juror #131 as the 15th person for the panel.

A white man in his 20s, the juror said he's married and works as an accountant.

Juror #131 said he had briefly seen one of the bystander videos of Chauvin's interaction with George Floyd, and said he felt the duration of Chauvin's knee on Floyd's neck was "a bit unnecessary." However, the juror assured the court he could put aside those views and make a decision based on the evidence.

The 15th juror could be excused on Monday, if all other jurors show up in court as scheduled. Due to COVID protocols, there is limited space for 14 jurors in the courtroom.

It took less than 15 minutes to excuse juror #129, a woman and mother of three who wrote on her questionnaire that she did not want to be a juror on this case, and that she feared for the safety of her family. After a few questions from Chauvin's attorney Judge Cahill dismissed her for cause.

The quest to seat a 15th "temporary alternate" juror began shortly after 9 a.m. with the questioning of juror #127, a man in his 50s or early 60s. He told the courtroom he has always struggled reading so he does not read the newspaper, does not have social media accounts and does not watch television news as he believes "the media" tries to influence viewers. "The news bothers me," he explained.

Juror #127 was a truck driver who trained to become a pipefitter at age 50. He insists he can be impartial, and told defense attorney Eric Nelson he would not hesitate to acquit if that's what the evidence dictated. "I don't want to be afraid to make the right choice... it's about a person's life right now," he said.

The state asked juror #127 a few questions about his dislike of the media and his statement that he would believe a police officer more than a civilian. Prosecutor Steve Schleicher then made a motion to dismiss for cause and Judge Cahill agreed, saying the juror exhibited bias that would prevent him from being fair and impartial.

Juror #127 is excused by Judge Cahill after Schleicher made a motion to dismiss for cause.

Cahill also is giving the defense back its strike used yesterday on Juror #121. He reviewed the case Nelson cited -- about evasiveness -- and Cahill agrees that should have been for cause

Judge Cahill opened the court proceedings on Monday morning by addressing prosecutors and Derek Chauvin's defense team, telling them he read further briefs on attorney Eric Nelson's request for a change of venue over the weekend, and has not changed his mind.

That means the trial of the former Minneapolis police officer will remain in Hennepin County as originally planned.

Previously, Derek Chauvin's attorney Eric Nelson had requested that the trial be delayed or moved after the city of Minneapolis announced it had unanimously approved a $27 million settlement with Floyd’s family, the largest in the city's history.

On Friday the judge noted that he believes even people who have been exposed to news of the incident can be impartial jurors, saying "I don't think there's any place in Minnesota that has not been subjected to extreme amounts of publicity in this case."

GALLERY: The Trial of Derek Chauvin

1 / 48
David Peterlinz/KARE 11
Protests outside the Hennepin County Government Center on April 19, 2021, the day of closing arguments in the Derek Chauvin trial.