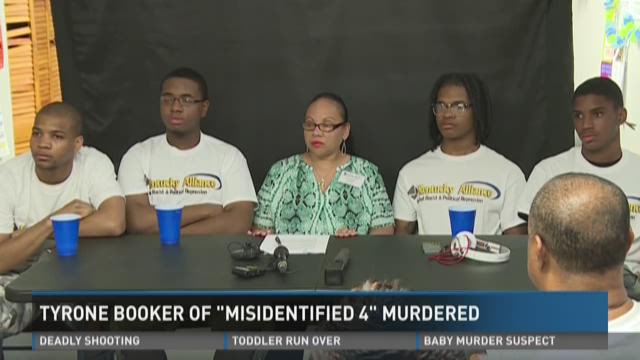 LOUISVILLE, Ky. (WHAS11) – After being wrongly accused of a crime in 2014, friends and family say things were finally looking up for 21-year-old Tyrone Booker. Police say he was shot in the back and killed on Easter Sunday.

On Monday evening, tears, hugs and candlelight filled an alley off of Oak Street. Small signs of a deadly shooting still linger as friends and family remember the man they called TJ.

“Is it hard being back here? I needed to get it off my chest. I needed to be here because I wanted to see where my son got shot at,” Tyrone Booker Sr. said.

Friends and family may know him as TJ, but in March 2014, many learned the name Tyrone Booker Jr. He was one of the Misidentified Four – a group of young men in Louisville wrongly accused of robbing a woman during the March 2014 mob violence that started on the Waterfront. Booker and three others were awarded a $1.5 million settlement from the city in 2015.

“We knew the story. And his plan was to use that to encourage young people and explain what he went through,” Charles Booker, a cousin said.

But instead, Charles Booker, TJ's cousin, says he'll have to continue that legacy for him.

“We were just getting ready to get together for family dinner. And they had to tell my grandmother that she had to leave because TJ was murdered,” Charles said.

As people gathered to remember the son, father and friend, police still do not have any suspects. The Booker's say they are a family of faith, they want justice and they have hope.

After going through so much so young, the Bookers say the future looked bright, until this senseless act of violence.

“Life was getting great for him. It was getting very good for him. But now, that good life has now been taken away,” he added.

Booker's family says they don't know why he was in that area or who would want to kill him. Police are still looking for any suspects in this case. They are asking anyone with information to call the anonymous tip line at 574-LMPD.