26-year-old Breonna Taylor was a decorated EMT worker who was shot, killed on March 13 when officers executed a no-knock search warrant at her apartment. 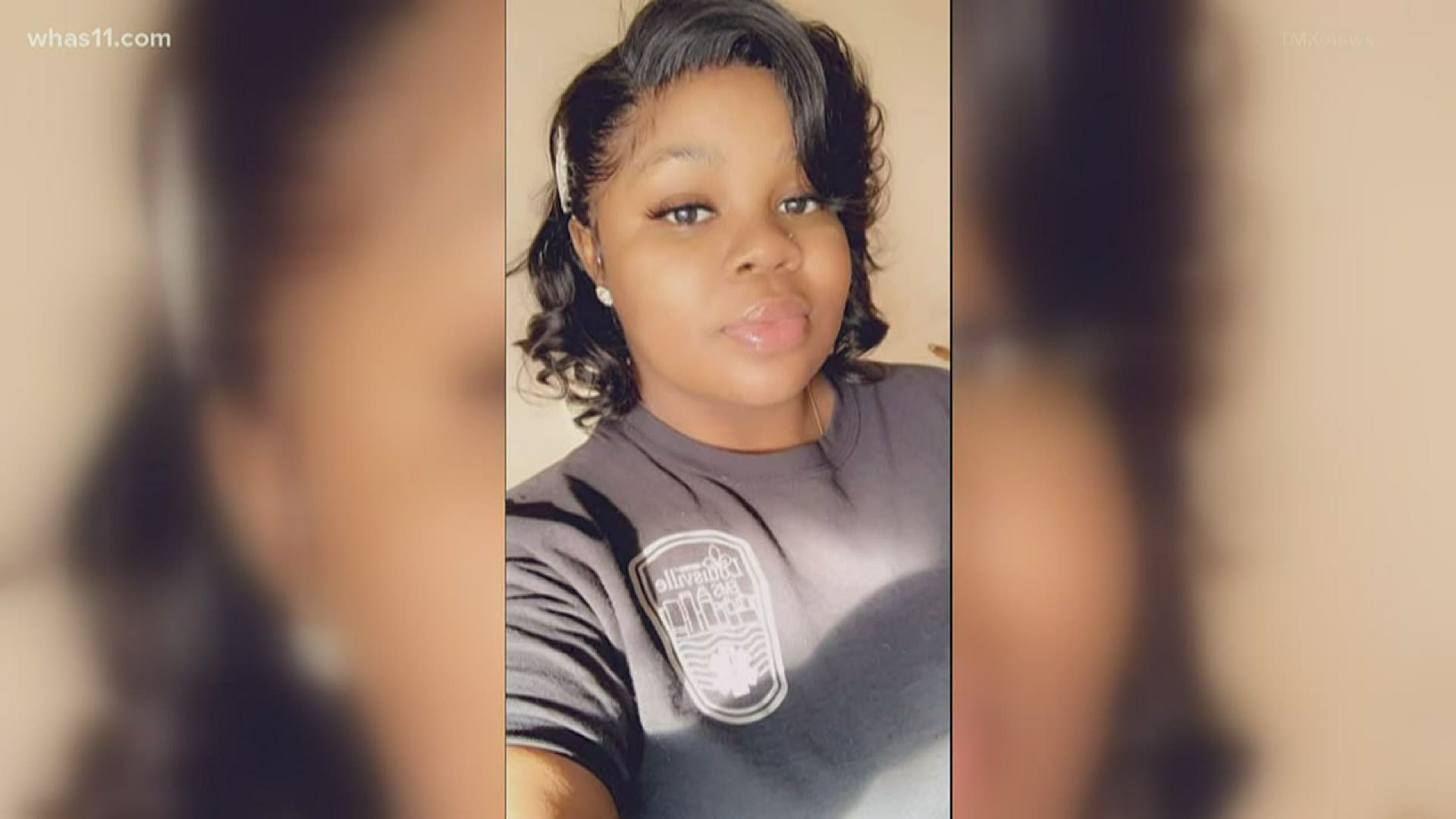 LOUISVILLE, Ky. — The investigation into the shooting death of Louisville EMT, Breonna Taylor, by Louisville Metro Police (LMPD) officers during a drug raid that is ongoing by several agencies. Taylor's family, the public, and Louisville leaders are demanding answers

Crump alleges officers botched the raid and says that resulted in them shooting Taylor eight times.

The police department's version of the investigation is nearly complete, according to LMPD Police Chief Steve Conrad.

Here’s everything we know so far:

Louisville Metro Police entered Breonna Taylor’s apartment at 3003 Springfield Drive around 12:40 a.m. on March 13 as a part of a drug-trafficking investigation.

A judge signed a no-knock search warrant in March which gave police permission to enter the property without identifying themselves. Despite that, LMPD said detectives knocked several times and announced their presence.

“A no-knock search warrant is against a person’s 4th amendment rights,” Benjamin Crump in his interview on The View on May 15.

A woman who lives next door to Taylor’s apartment said she woke up to the sound of gunshots in the early morning of March 13 and heard Taylor's boyfriend yelling for help, according to an affidavit.

Taylor's sister who lives there was not home at the time.

Attorneys said Walker, a registered gun owner, was acting in self-defense and thought someone was breaking into the apartment during the March 13 incident.

27-year-old Kenneth Walker gave a Mirandized statement on March 13 admitting to being the only person to shoot from inside of the apartment at detectives as they attempted to serve the search warrant.

LMPD Police Chief Steve Conrad said there is no body-cam footage because the officers executing the search warrant were not wearing any. The three detectives were a part of the department’s Criminal Interdiction Division.

Taylor’s death had the Louisville community raising questions as to who the target was in the search warrant at her apartment.

According to the search warrant, 30-year-old Jamarcus Glover and 27-year-old Adrian Walker were listed as the main suspects. The warrant also listed Breonna Taylor’s name and DOB. Her address was on the warrant, including images of her apartment and patio.

Kenneth Walker’s name was not mentioned in the warrant. It is unclear at this time if Adrian and Kenneth are related.

What the search warrant revealed

An affidavit, by Detective Joshua C. Jaynes, affirms Glover was using Taylor’s address as his own since Feb. 20.

Detective Jaynes stated in his affidavit he had observed Glover and Adrian Walker since early January running a “trap house”, where drugs are sold, at 2424 Elliott Ave. Records show Taylor’s white 2016 Chevy Impala was also spotted occasionally at the house.

An affidavit supporting that claim shows police found some of Taylor's belongings including Glover's mail inside her purse but showed nothing that appeared to be illegal.

Glover and Adrian would make frequent trips to Taylor’s apartment in a red 2017 Dodge Charger from the house on Elliott Ave, according to the warrant. In one instance, Glover was reportedly spotted at Taylor’s place on January 16 leaving with a USPS package.

After leaving Taylor's apartment with the package, detectives said Glover then drove to the 2600 block of Muhammad Ali Blvd to a known “drug house.”

Detective Jaynes verified through a US Postal Inspector that Glover had been receiving packages suspected of drugs to Taylor’s apartment. The detective believed Glover had been stashing drugs or money at her apartment to avoid detection from law enforcement. He was charged the same morning Taylor was killed.

Taylor's attorneys claim this information is false. They said they spoke to Louisville postal inspector Tony Gooden, who provided information that "directly contradicts" what police stated in the affidavit.

Here is the full statement from Benjamin Crump, Sam Aguiar and Lonita Baker:

“Today, Louisville postal inspector Tony Gooden asserted that the LMPD did not use his office to verify that a drug suspect delivered packages to Breonna Taylor’s address, which directly contradicts what the police stated in the affidavit to secure a no-knock warrant for the home.

This revelation validates what we already knew: This young woman was brutally and unjustifiably killed by Louisville police, who supplied false information on the warrant they used to enter her home unannounced. Gooden further stated that ‘no packages of interest were going there.’ We will continue to demand transparency from the Louisville police on behalf of Breonna’s family.”

Documents show the no-knock order was requested because Glover and Adrian Walker have a history of attempting to destroy evidence, fleeing police, and placing surveillance cameras on the trap house to compromise detectives if seen approaching.

"Kenny Walker right now his case is so important too because he got charged with attempted murder of a police officer as a result of everything the police did in this," Aguiar said.

Though Walker was arrested and charged, court records show a judge released him on home incarceration in late March. 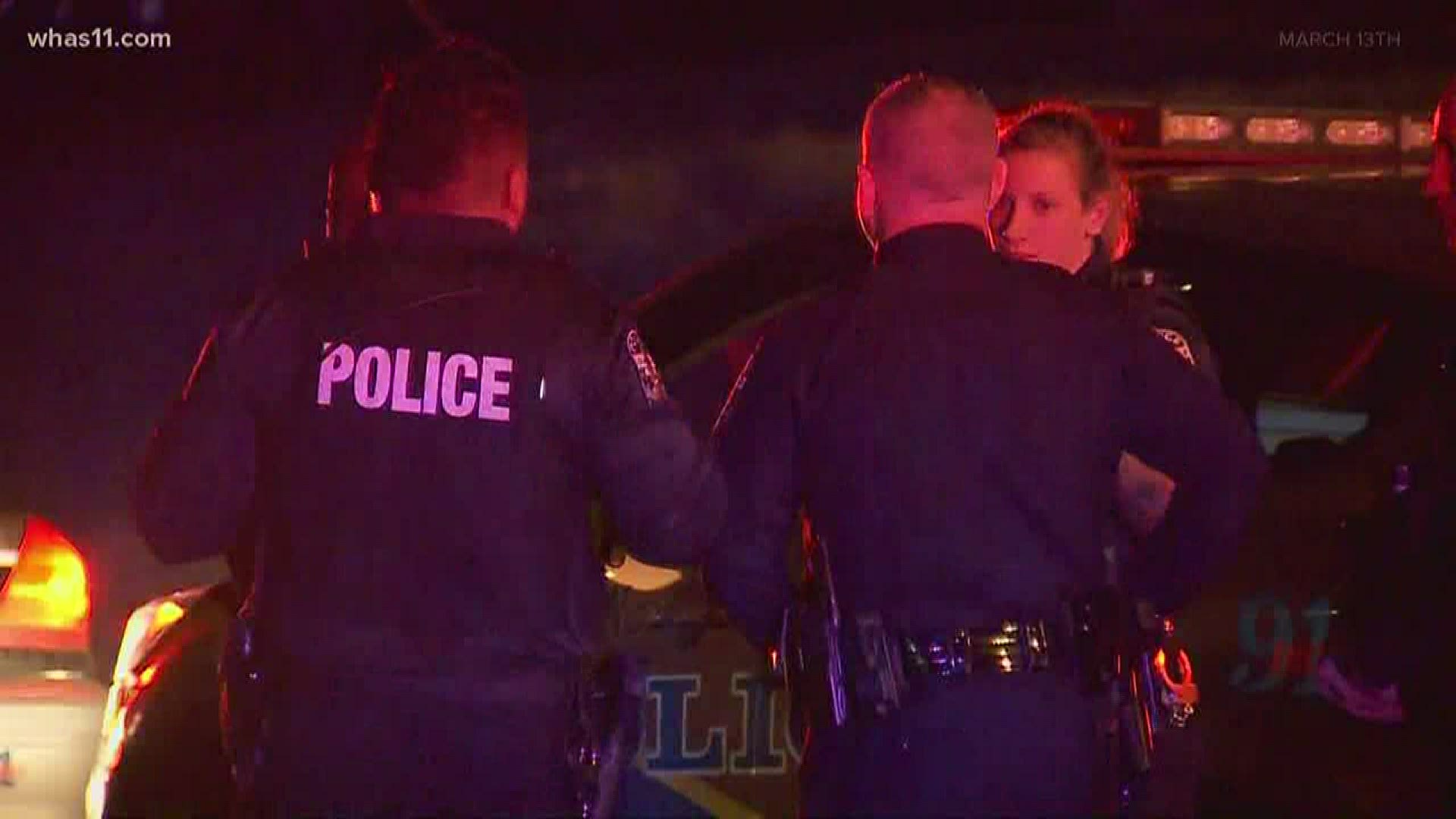 Louisville’s Mayor Greg Fischer speaks out about the case

Louisville Mayor Greg Fischer revealed on May 13, Commonwealth Attorney Tom Wine would be recusing himself in Taylor's case because he is prosecuting Kenneth Walker. In a statement, Fischer said in part: “The case will be submitted to the Commonwealth’s Attorney to determine potential prosecution. If Commonwealth’s Attorney Tom Wine does not pursue charges, or once a potential case is over, the matter is handed over for review by the Professional Standards Unit, which could then lead to discipline from the Chief, if that is deemed appropriate.”

The Commonwealth's Attorney's Office said it has requested the Attorney General to appoint a special prosecutor to review the case.

Taylor's case has received national attention including former presidential candidate and California Senator, Kamala Harris. Harris said there should be an investigation, and "there is not justice coming out of Bill Barr's Department of Justice."

Louisville's Interdenominational Ministerial Coalition is calling for outside help in the case saying in a statement, "We call for an immediate independent investigation into Ms. Taylor's death led by law enforcement, investigators, and prosecutors outside the Louisville community."

What the Louisville Metro Police Department are saying

LMPD said it does not comment on pending litigation but confirmed the three detectives have remained on administrative reassignment since the shooting.

Who is Breonna Taylor?

26-year-old Breonna Taylor is a decorated EMT who was preparing to confront the coronavirus, working for both Jewish and Norton Hospitals. Taylor loved her family and had an ambitious drive to succeed.

"All [Taylor] cared about was being great and helping people," Taylor’s mom said.

Taylor’s family members say that she was kind, hardworking, and honest.

“She (Breonna) was already an accomplished and certified EMT for the City of Louisville and currently worked for UofL as a medical tech. This is not a woman who would sacrifice her life and her family morals and values to sell drugs on the street,” Bonica Austin, Taylor’s aunt, said.

Taylor was shot eight times and was killed in the botched police raid on March 13.

Taylor does not have a criminal background. 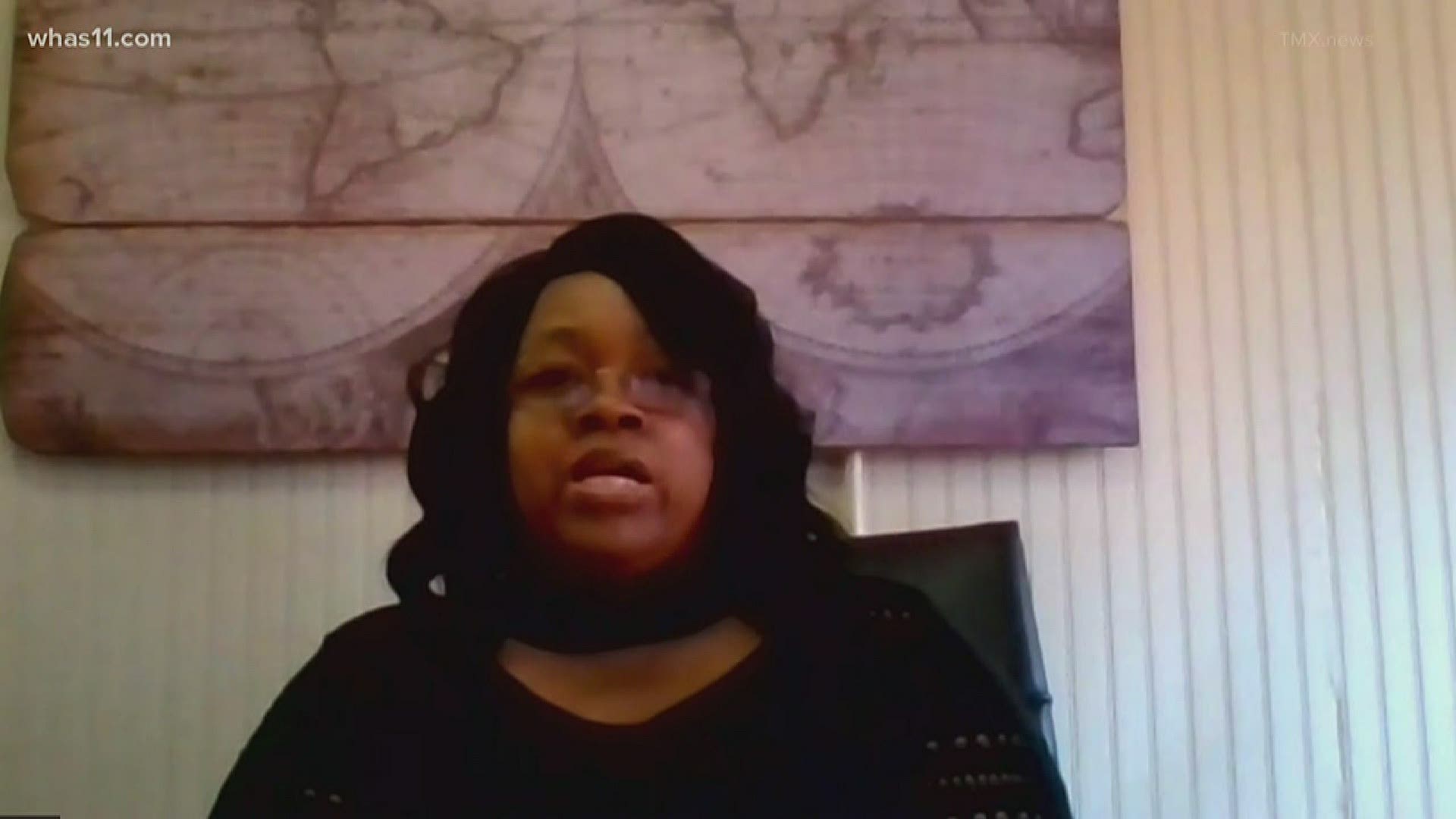 Who is Kenneth Walker?

27-year-old Kenneth Walker is Breonna Taylor’s boyfriend. Walker is currently being charged with the attempted murder of a police officer during the police raid on March 13.

Walker gave a Mirandized statement on March 13 admitting to being the only person to shoot from inside of the apartment at detectives as they attempted to serve the search warrant.

Taylor's mother, Tamika Palmer, spoke with a news organization TMX in an interview shared with WHAS11 News about the shooting.

Walker was released on home incarceration in late March. His name was not mentioned in the search warrant issued to Taylor’s house and did not live with her. It is unclear at this time if Kenneth and Adrian Walker are related.

"Kenny Walker right now his case is so important too because he got charged with attempted murder of a police officer as a result of everything the police did in this,” Attorney Aguiar said.

Walker's father says his son had just accepted a job to work at the U.S. Postal Office.

Walker does not have a criminal background.

Who is Jamarcus Glover?

30-year-old Jamarcus Glover is one of the main suspects in the no-knock search warrant that Detective Joshua C. Jaynes requested.

Detective Jaynes had been surveilling Glover since the beginning of January 2020.

In an affidavit summarizing the investigation, Jaynes confirmed Glover had been using Taylor’s address since late Feb.

An attorney for Taylor's family, Sam Aguiar, said Wednesday that Taylor and Glover had dated two years ago and maintained a "passive friendship."

Jamarcus Glover was the target of a search warrant executed at 2424 Elliott Ave. on March 13, the same night as Taylor's death, where he was arrested and charged with Trafficking synthetic drugs, Enhanced Trafficking in a Controlled Substance greater than 4 grams, Trafficking Marijuana, Drug paraphernalia, (3) convicted felon in possession of a handgun.

Who is Adrian Walker?

27-year-old Adrian Walker is the other main suspect suspects in the no-knock search warrant that Detective Joshua C. Jaynes requested.

According to an arrest report on December 30, 2019. Officer Evans and Officer Heller were investigating narcotics activity on in the alleged trap house on 2424 Elliott Ave and 2605 Muhammad Ali Blvd.

Adrian Walker Glover and would make frequent trips to Taylor’s apartment in a red 2017 Dodge Charger from the house on Elliott Ave, according to the warrant.

A confidential Informative told police intelligence about how and where Walker and subjects hid their drugs in an abandoned house adjacent to their (Elliott Ave.) property.

Upon searching the three properties, officers recovered crack cocaine, marijuana, scale, 5 handguns (1 of which was stolen), and 3 long guns.

This is still an ongoing investigation.