You don't have to be an Olympic athlete to get gold medal physical therapy. One of the practitioners who is working with Olympians in Rio is right here in Kentuckiana. 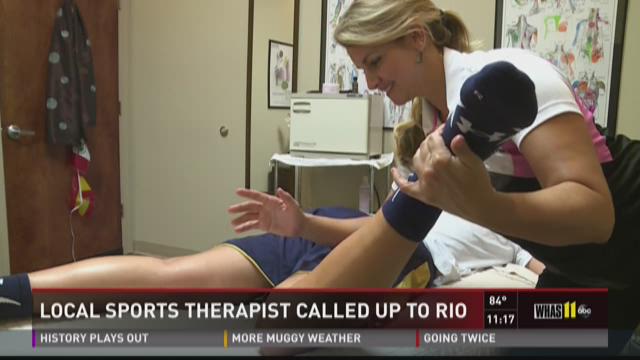 LOUISVILLE, Ky. (WHAS11) -- You don't have to be an Olympic athlete to get gold medal physical therapy. One of the practitioners who is working with Olympians in Rio is right here in Kentuckiana.

“Is that tender? Just on the spot?” Laura Boozer said, as she massages a client.

Laura Boozer has been working as a sports therapist in Elizabethtown for 14 years, but now she's taking her talents global.

“I read that email and it said, 'Congratulations! We will see you in Rio!'” she cheered.

She's heading to the Olympics to use her massage therapy expertise to help athletes recover while they compete for the gold.

“It gives me goosebumps,” she expressed with a smile.

She works with competitive athletes all the time, including the UofL’s Women’s Basketball Team.

But as she prepares for former and future Olympic medalists, she says she’s feeling the pressure.

“I really don't want to be that person responsible for a world class athlete not being able to perform the next day because I made them sore.”

It's all volunteer for at least eight hour days in Olympic Village.

“If athletes are still coming in, you just don't leave until you're done, until that last kid or athlete is out of there,” she said.

It’s the opportunity of a lifetime, and sure, she might be surrounded by world class athletes, but in Laura's mind, she's getting the gold too.

Although the Olympics end on the August 21, she says she’ll be staying a few more days to help the athletes recover.