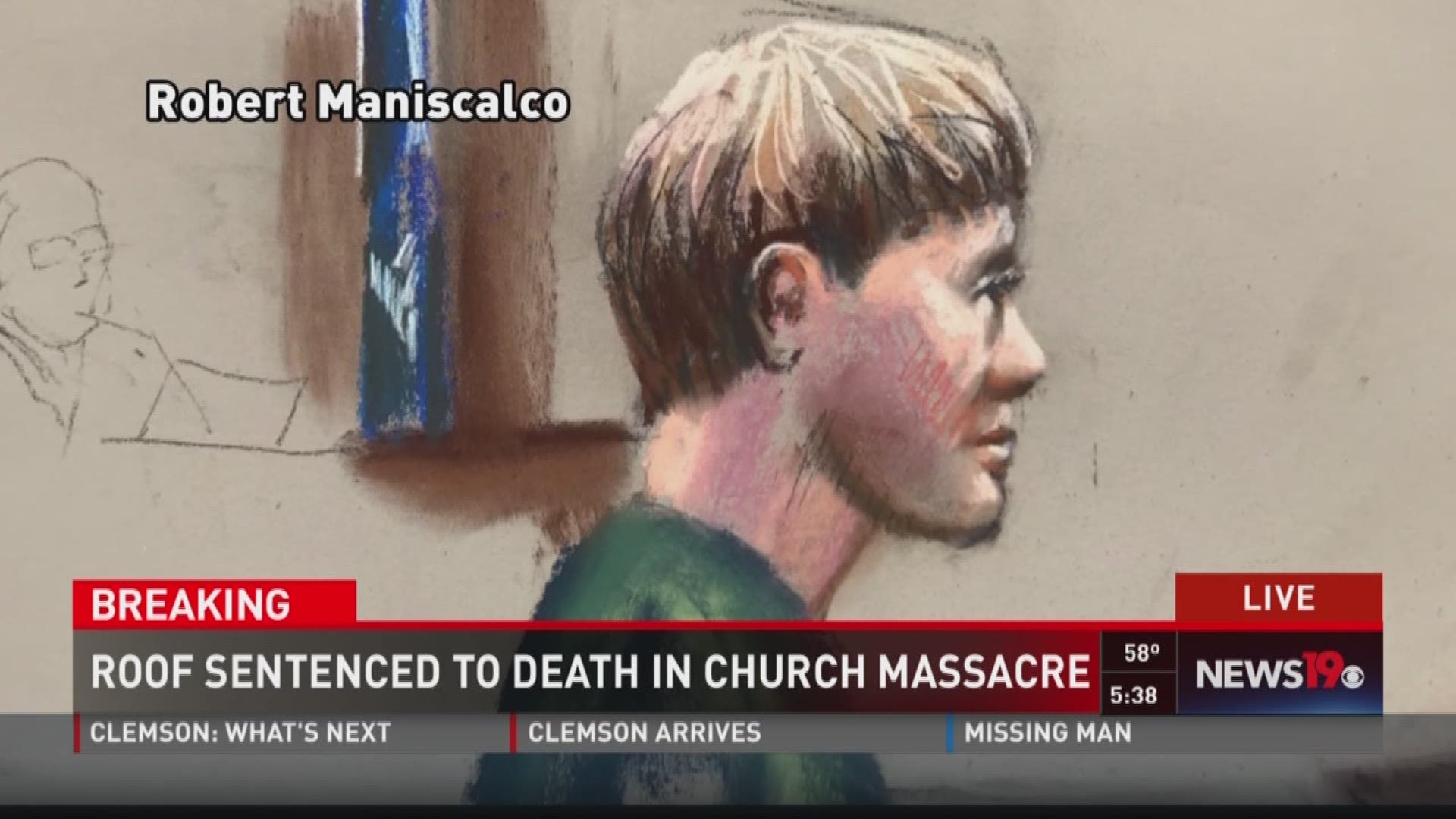 The jury deliberated for just under three hours Tuesday before coming to a decision. A judge will formally affirm the decision at a hearing Wednesday morning. During that time, the families of the victims will be allowed to address Roof directly.

In a statement emailed to reporters after the announcement, Roof's relatives said they will "struggle as long as we live" to understand why he killed the victims. The relatives, who have not returned to court since the start of his trial, "express the grief we feel for the victims of his crimes, and our sympathy to the many families he has hurt."

Hours earlier, Roof , dressed in a blue sweater, did not ask for forgiveness in his final statement to the jury, and did not ask the jury to give him the life sentence for his mass shooting at Mother Emanuel AME back in June of 2015.

He also said during his short closing statement that the prosecution and anyone else who hated him was “misled.”

“They don’t know what real hatred looks like,” Roof said to the jury.

Roof also told the jury that he’s been told it was his right to ask for the life sentence but said he didn’t know what good that would do.

Prosecutor Jay Richardson passionately expressed to the jury for about two hours why Roof deserved the death penalty.

“You’ve heard how after they started that Bible study, they welcomed a 13th person that night,” Richardson said.

Richardson started off by telling the jury how the worshippers were studying Mark 4 the night of June 17, 2015.

Richardson says Roof “walked methodically around the room executing one after the other.”

Loved ones shed tears as the prosecution showed the late victims in pools of blood at the church.

Richardson also reviewed Roof’s racist writings and reiterated how Roof had said he needed to take action since Blacks were “raping white women and taking over the world.”

Richardson told the jury Roof had planned and prepared for the mass shooting by doing things like buying a gun, having target practice in his backyard, researching and studying racist websites and driving to the church several times in the months leading up to the shooting.

“He thought, prepared and ultimately decided to go through with it,” Richardson told the jury.

“His plan was to agitate, incite and create a white future,” Richardson explained of Roof’s desires. “Not one ounce of remorse.”

Richardson reminded the jury how Roof said he had not shed a single tear for the victim.

“People he believed were subhuman that were less than human,” Richardson said of Roof’s regard for the victims. “No remorse for that pain that he’s caused.”

“You also know how extremely good these people were,” Richardson said. “You know who they were and how they lived their lives.”

Richardson said all that Roof has done justifies the death penalty and should die for killing the nine victims.

“He wants to spend his life in prison, listening to the radio, writing more racist filth,” the prosecutor said. “His hatred is not the passionate anger hatred, it’s calculated, it’s cold, but it is hatred just the same.”

“The loss of his freedom was worth it,” Richardson said of Roof’s beliefs. “He continues to believe that he has done the right thing.”

One by one, Richardson described each victim’s life over pictures.

During the course of the trial, the relatives and friends of Clementa Pinckney, Sharonda Coleman-Singleton, Tywanza Sanders, Ethel Lance, Susie Jackson, Cynthia Hurd, Myra Thompson, Daniel Simmons Sr., and DePayne Middleton-Doctor all shared the great loss they’ve felt without their loved ones.

The jury had convicted Roof of 33 counts for the church slayings in December.