Half of the people arrested during DC's protests this weekend were charged with felony rioting. Here's what that means

WUSA9 is digging deeper – looking into exactly what charges the people arrested at this weekend’s protests in the District are facing. 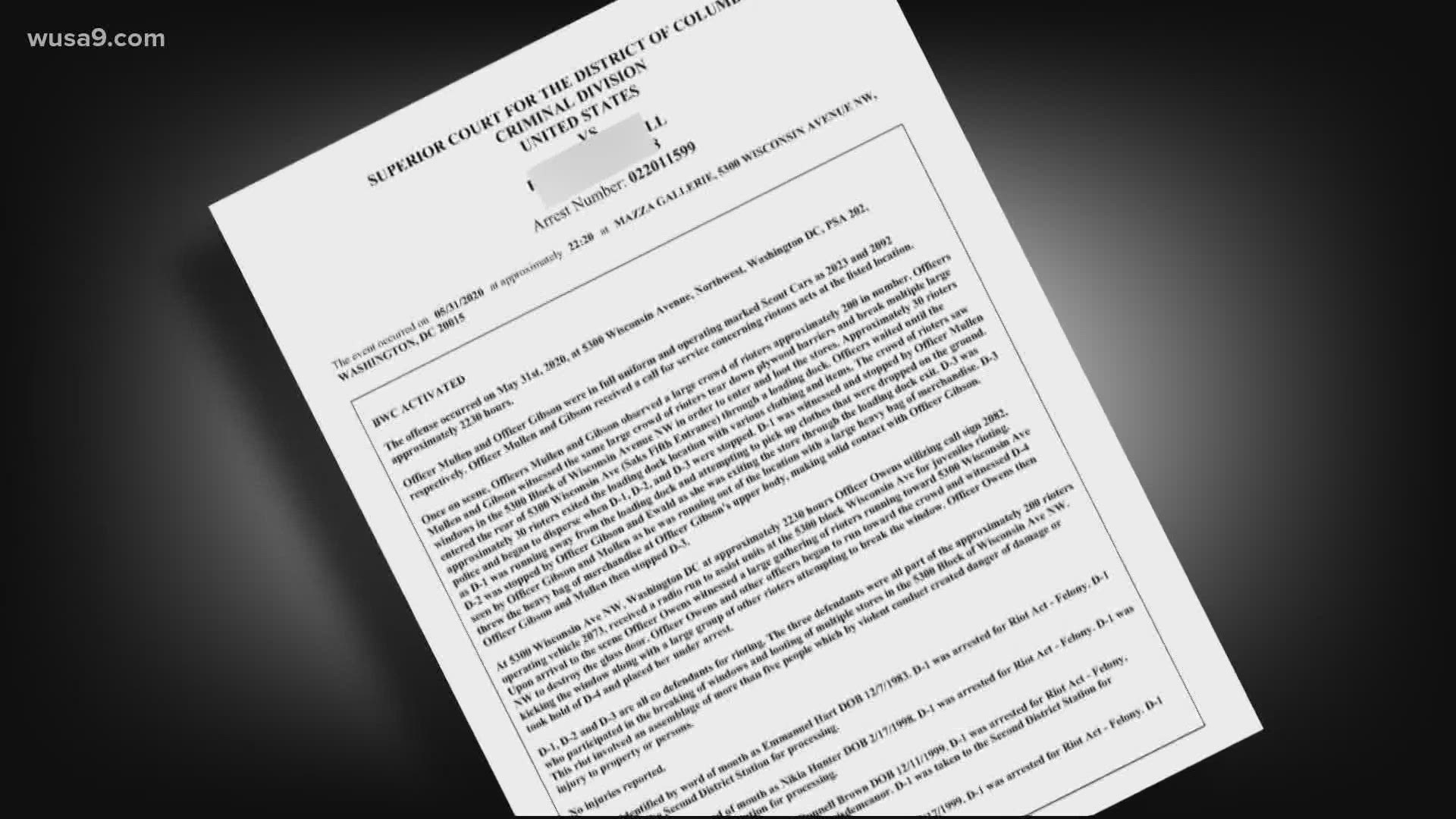 WASHINGTON — Information from D.C.’s Metropolitan Police Department and records from DC Superior Court give insight into exactly what police say happened during this past weekend’s protests. WUSA9 was able to closely examine the arrests from this past weekend. MPD has released aggregate numbers for Monday and Tuesday, but not detailed information.

Over the weekend, the three most common charges were felony rioting, burglary and curfew violation.

Many people are facing more than one charge.

Since felony rioting is the most common, we looked at how the D.C. Code defines the crime. It says rioting is a public disturbance involving five or more people "which by tumultuous and violent conduct or the threat thereof creates grave danger of damage or injury to property or persons."

One document describes the chaos near Lafayette Square Park and the march through D.C. streets, where police also made arrests. Officers said people "began to throw materials into the street blocking emergency vehicle responses, setting fires to at least two vehicles, trash cans and dumpsters."

Some are now racing north... toward Friendship Heights. This is video from 5 minutes ago when @dcpolice cruisers were heading south on Wisconsin by Cathedral Heights. (@wusa9) pic.twitter.com/quPWfFN6r4

Another affidavit describes the looting at Mazza Gallerie on Saturday night. Police arrested a number of people for "Riot Act -- Felony." WUSA9 has shown video from Wisconsin Avenue. Now we know what police say they found -- "a large crowd of rioters approximately 200 in number." Officers wrote they witnessed the crowd try to break multiple windows and run away with merchandise.

In terms of the consequences for this, these charges come with possible fines of $1,000 and at most six months in jail.

On Wednesday, MPD Chief Peter Newsham released more detailed arrest numbers. He said on Monday there were an additional 288 arrests, and on Tuesday, just 19.

The most common charge, according to Newsham, is curfew violation at 63% of charges

Newsham says curfew violation is now the most common charge, at 63% of cases.

WUSA9 analyzed the weekend's arrest records and found that more than 75% of arrested people listed their residence as within 20 miles of D.C. On Wednesday, Newsham reaffirmed that, saying that 90% of people arrested were either from D.C., Maryland or Virginia. The remaining arrests were either from another state, or listed no address.

RELATED: Outside agitators? Among arrests at DC protests we found... one

It's important to note, these arrests are still going through the court system. Some of the initial charges have been and will be knocked down to lesser crimes. And of course, no one has been convicted yet.

RELATED: VERIFY: Fact-checking photos and claims from the nationwide protests