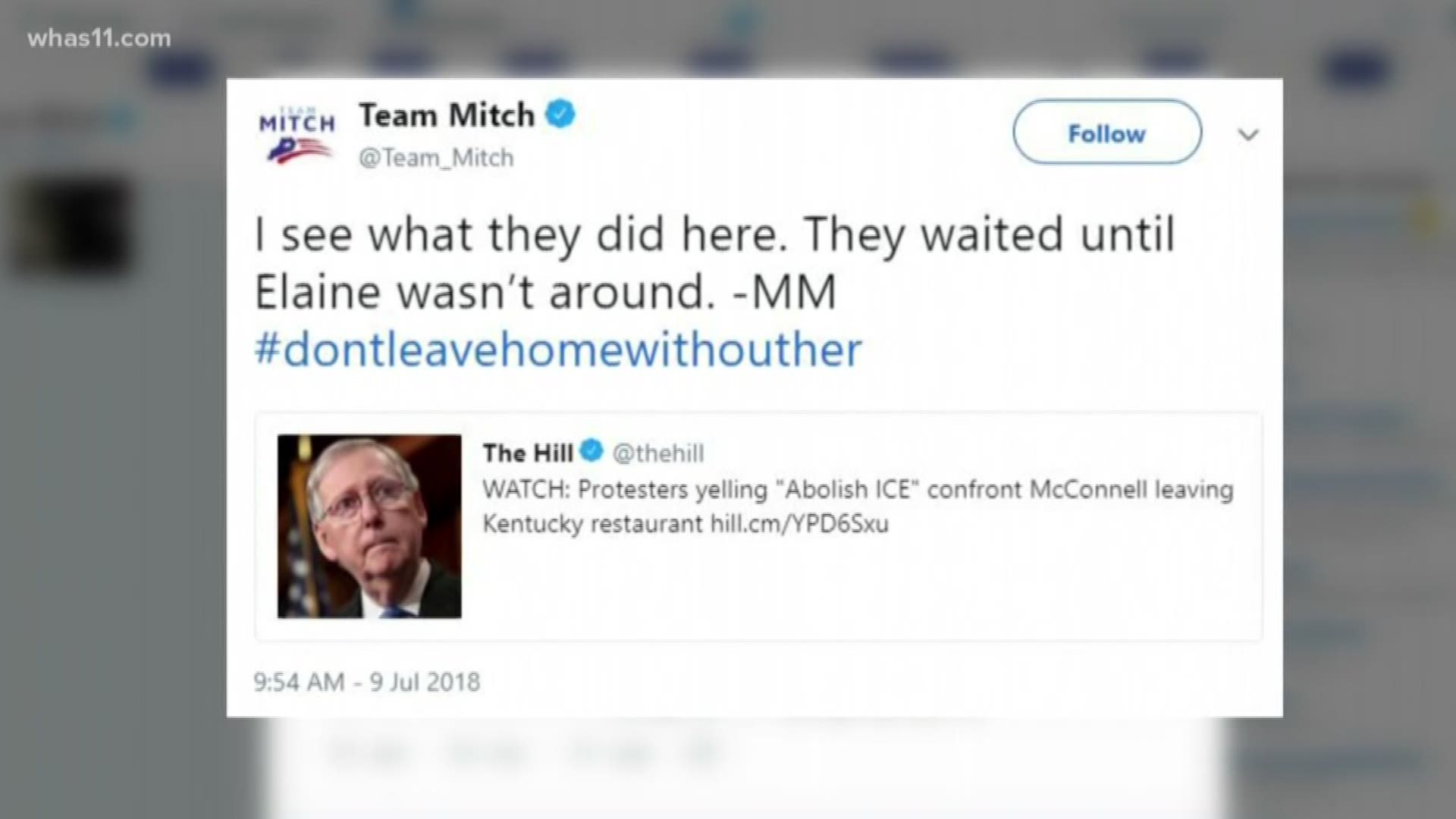 LOUISVILLE, Ky. (WHAS11) When it comes to eating out, Senator Mitch McConnell's party size has recently been larger than he expected.

Over the weekend, the Senate Majority Leader was forced to leave a restaurant with a soundtrack of heckles and jeers from protesters. On Sunday, those who oppose McConnell's stance on immigration, blared the Public Enemy song "Fight the Power" outside Sarino restaurant in Germantown and reportedly yelled, "No justice, no peace."

It was the second instance of McConnell being publicly confronted in Louisville in the past week. After being taunted outside Bristol Bar and Grille in the Highlands with the chants, "Vote you out," McConnell responded on social media, tweeting "I see what they did there. They waited until Elaine wasn't around. #dontleavehomewithouther".

Sen. McConnell's tweet referenced a previous incident in Washington when he and his wife, U.S. Transportation Secretary Elaine Chao, fought back.

"Why don't you leave my husband alone," she shouted to protesters.

McConnell has been a frequent target of the confrontations weeks after Rep. Maxine Waters (D - California) called on supporters to harass elected officials in public.

"I don't think that what she is recommending is going to change anything," Rep. John Yarmuth (D- Louisville) told WHAS 11 News Political Editor Chris Williams, "If it makes her feel better, go ahead. "

Rep. Yarmuth stressed he wasn't suggesting what protesters was doing was right or wrong, rather the method would not get the desired result.

"Unfortunately If we keep going where we are, I fear we are going to result in fisticuffs in some instances, it's almost getting to that point now," University of Louisville Political Science Professor Dr. Dewey Clayton said, calling the state of discourse in the nation hardened.

He feels protesters are motivated by people in positions of power.

"People may have had these feelings and inclinations but they they're emboldened to come out. That's the one problem, they think it's okay," Clayton said, "To think a senator can't have a meal in a restaurant with his wife without being approached and attacked and harassed, this is unacceptable and this is on both sides."

Clayton, like Yarmuth, feels the approach of in-your-face tactics are ineffective and the true way to get change goes back to leadership.

"Once we start having our leaders give us moral leadership, then people can emulate them, I think we'll get back to a level of civility," Clayton said, adding, "I mean, we've got to."