Complaint filed against LMPD for alleged repeated use of force, intimidation in response to peaceful protesters

A new federal lawsuit claims LMPD repeatedly used force and intimidation in response to peaceful protesters in May and June. 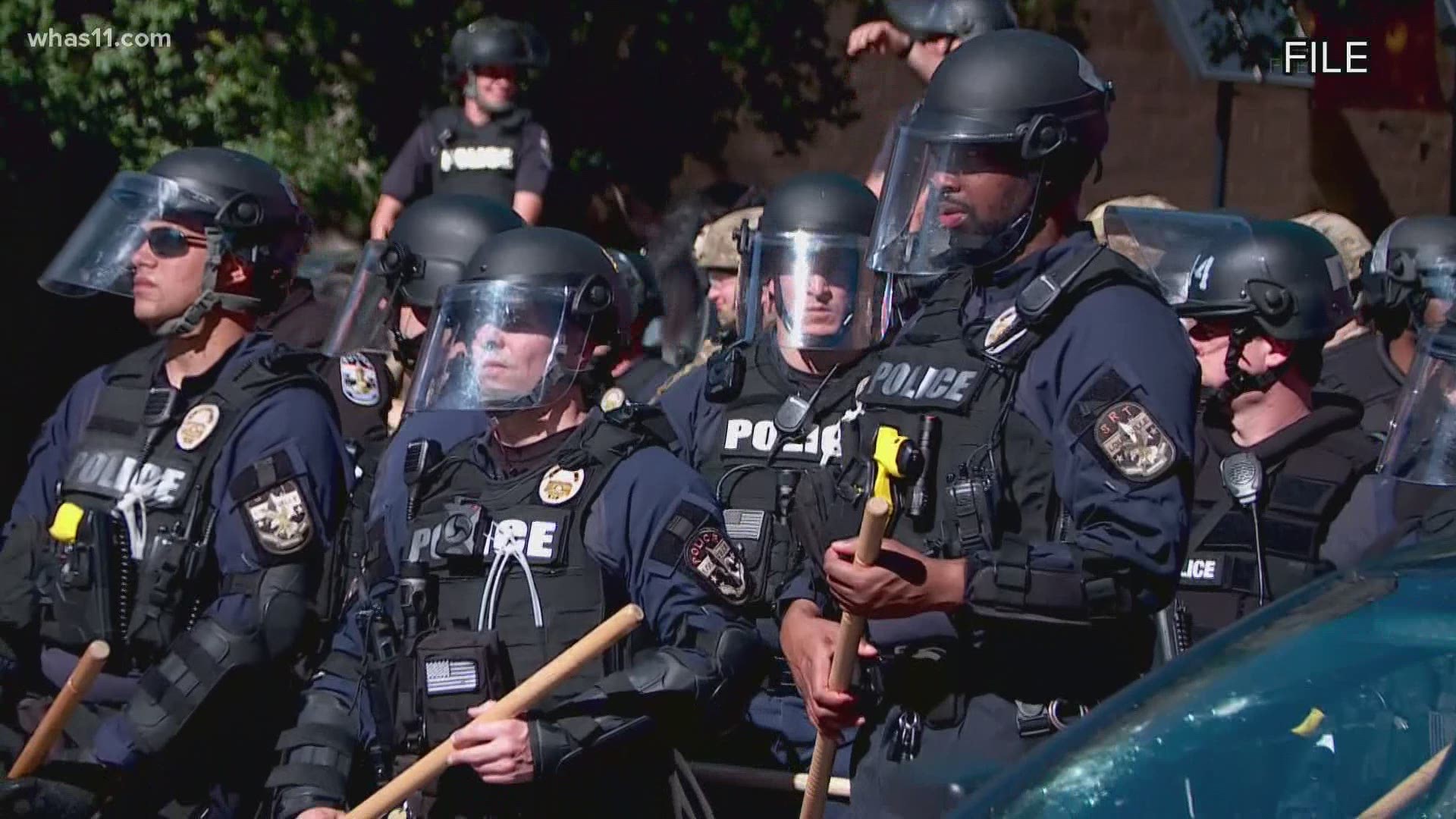 LOUISVILLE, Ky. — It's been more than 60 days of protests for people like Heady Payne, feeling like they haven't been treated right.

"We try to promote love, and we get beat down for it," Payne said. "You know they're telling you all that you're inciting a riot, that you're just aggravating a crowd, how? You're standing there."

When WHAS11 told Payne the NAACP Legal Defense and Educational Fund, Inc. (LDF), the Kentucky American Civil Liberties Union (ACLU-KY) and law firm Emery Celli Brinckerhoff Abady Ward & Maazel LLP filed a complaint against LMPD for their alleged repeated use of force and intimidation of peaceful protesters, he felt like he was being heard. It's something he hasn't experienced with the department.

"It feels like I'm being oppressed. It feels like everything that I'm trying to say aint being heard, that they ain't listening," Payne said.

"We give them respect and we are peaceful protesters. You get what I'm saying. Harassing us. That ain't the way," another protester, Jaylen, said.

Jaylen said that's what's happened when they are fighting for justice.

"It's real emotional right now. Everybody is feeling some type of way and everybody getting different opinions about how they feel about the situation," Jaylen said.

The complaint says in May and June, LMPD used military grade technology like tear gas, flash bangs and pepper balls on protesters.

In June and July, they said there were mass arrests of protesters charging them with unwarranted felonies.

The complaint calls them indiscriminate acts.

"Unfortunately these protests against police violence have, in Louisville and in other places, been met by more police violence," Aaron Tucek, an attorney with ACLU-KY, said.

He said going forward, they want this behavior to stop.

"The role of police officers in that picture is to protect people as they are going about exercising their rights in that space," Tucek said. "That's why it is all the more important that protesters are able to Have a voice and be heard, without fear of oppression."

We haven't received a comment from the Jefferson County Attorney's Office on this specific lawsuit. Back at the beginning of June, LMPD did address concerns from the community about their use of these items and when they use them.

"We monitor the entire landscape and the behavior in the crowd and watch for signs that violence or disturbance will erupt soon," LMPD Major Dave Allen said.

Read the full statement below:

Today, the NAACP Legal Defense and Educational Fund, Inc. (LDF), the Kentucky American Civil Liberties Union (ACLU-KY), and law firm Emery Celli Brinckerhoff Abady Ward & Maazel LLP (ECBAWM) filed a complaint against the Louisville Metro Police Department (LMPD) for their repeated use of force and intimidation in response to peaceful protesters demonstrating against police violence. The complaint, which is filed on behalf of people who were subject to and injured by the LMPD’s militaristic response, seeks both monetary relief for individual protesters and injunctive relief barring LMPD from engaging in further efforts to silence protesters demanding justice.

In recent months, the killings of George Floyd and Breonna Taylor have sparked demonstrations advocating for the elimination of racist and violent policing across all 50 states. Those protests remain ongoing to this day, both in Louisville, where Taylor was killed, and across the country. LMPD’s response to these largely peaceful demonstrations has been violent; throughout late May and June, the LMPD used tear gas, flashbangs, pepper balls, batons, and other military-grade technology on protesters. Through June and July, LMPD has engaged in mass arrests, rounding up dozens—if not hundreds—of peaceful protesters and charging them with unwarranted felonies. In one high-profile incident, LMPD’s militarized response led to yet another senseless death. David McAtee, a local Black restaurant owner, died after the National Guard and LMPD opened fire on him at his restaurant on May 31, 2020.

“Louisville residents are demanding accountability from their police department in this unprecedented moment in our country’s history. Yet instead of engaging seriously with the community they have sworn to protect, LMPD has chosen to subject these peaceful protesters to the very same violence they are demonstrating against,” said LDF Assistant Counsel Ashok Chandran. “It is unacceptable for police officers to brutalize anyone engaged in peaceful protesting. It is an unconscionably cruel irony when those protesters are organizing against police abuse itself. The LMPD’s use of force has already cost Breonna Taylor and David McAtee their lives. Their legacies, and the brave protesters we represent, are demanding justice, and this lawsuit will hopefully help bring it to them.”

“Thousands of Louisville residents took to the streets demanding justice for Breonna Taylor and an end to excessive use of police force against Black people. The Louisville Metro Police Department responded to these demonstrations with even more excessive force, meeting peaceful protesters with tear gas, pepper balls, and flashbang grenades,” said Heather Gatnarek, Staff Attorney for ACLU-KY. “Instead of protecting First Amendment rights, law enforcement targeted peaceful protesters and journalists. This lawsuit seeks to ensure these horrific scenes never play out on our streets again. Kentuckians must be able to raise their voices to protect Black lives without fear of police violence.”

“Louisville is using weapons of war against its own citizens,” said ECBAWM partner Sam Shapiro. “It is trying to silence peaceful protestors through unjustified arrests and trumped-up charges. Shockingly, its mayor and the leadership of the LMPD are endorsing this unconstitutional conduct. Our clients are committed to fighting back against these practices. They are bringing this case to make Louisville safe for all peaceful protestors.”

LDF is committed to protecting the constitutional right to peacefully protest and ensuring law enforcement officers are held accountable for their actions to the fullest of the law.

Read the full complaint below: