US orders China to close Houston consulate; employees there respond by burning documents

Houston firefighters were called to the consulate on Tuesday evening, shortly after the closure order, where someone was allegedly burning documents in a courtyard. 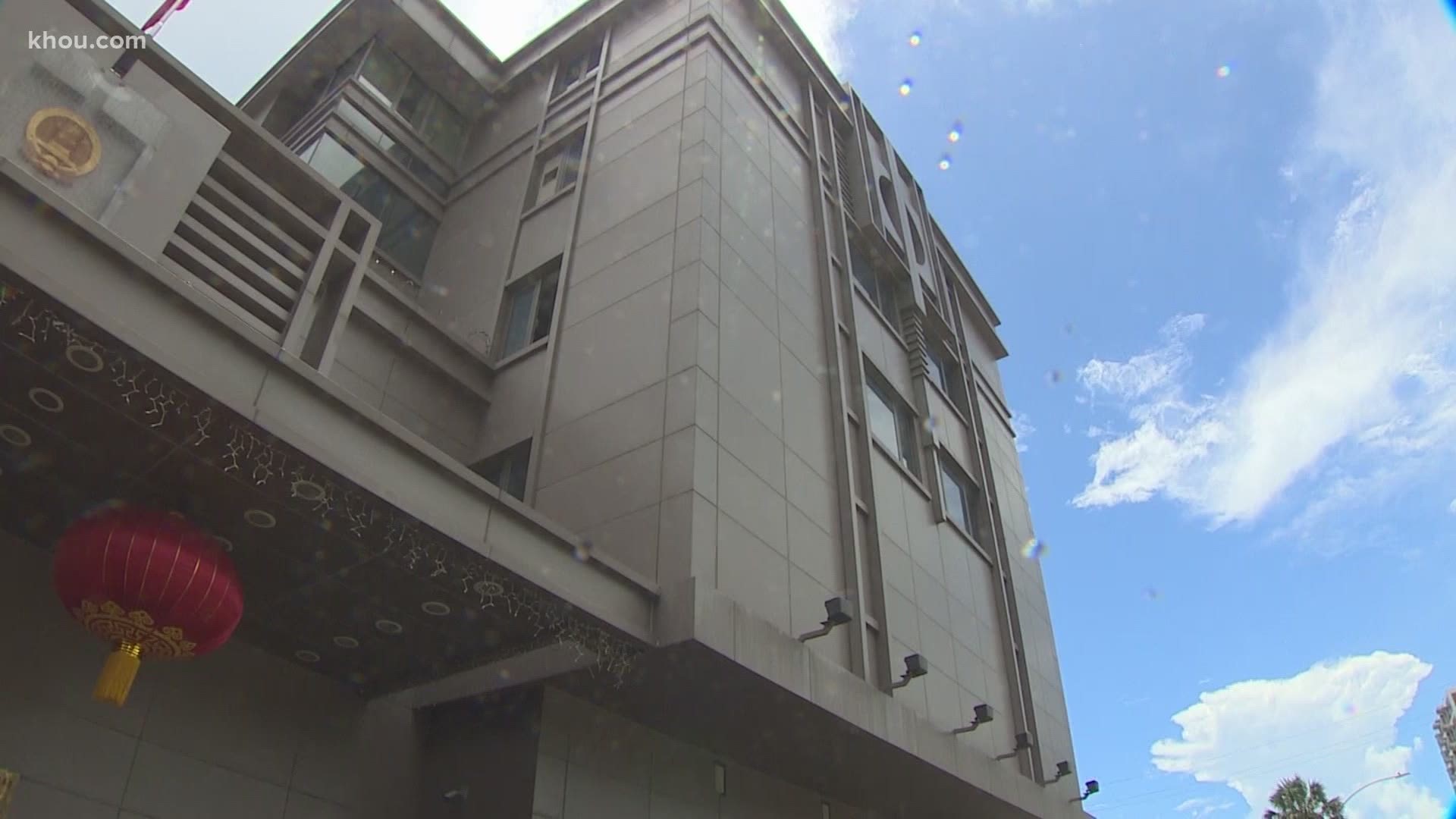 HOUSTON — China says the United States government this week ordered it to abruptly close its Houston consulate in what it called a "provocation" that violates international law.

The New York Times reported the Chinese government issued a warning that it would retaliate for the closure.

After the order was issued, neighbors said someone at the consulate was burning documents in an outdoor courtyard area Tuesday night in what appeared to be trash cans.

Firefighters responded to the consulate, located in Houston's Montrose neighborhood, but weren't allowed on the property. Due to an international agreement, they could not enter the premises without consent unless there was a threat to health and safety.

A source told KHOU 11 the consulate is being evicted by 4 p.m. Friday. A Chinese foreign ministry spokesperson said the U.S. had demanded Tuesday the consulate cease operations. He said that China strongly condemns “such an outrageous and unjustified move that will sabotage China-US relations.”

But the State Department said consulates must respect American laws and not interfere in internal affairs:

"The Vienna Convention states diplomats must 'respect the laws and regulations of the receiving State' and 'have a duty not to interfere in the internal affairs of that State.' The United States will not tolerate the PRC’s violations of our sovereignty and intimidation of our people, just as we have not tolerated the PRC’s unfair trade practices, theft of American jobs, and other egregious behavior. President Trump insists on fairness and reciprocity in U.S.-China relations," stated Ortagus on Wednesday.

President Trump was asked during a news conference Wednesday afternoon if he planned to take additional action.

"As far as closing additional embassies, it's always possible. You see what's going on. We thought there was a fire in the one we did close. Everybody said there's a fire, there's a fire. I guess they were burning documents or burning papers and I wonder what that's all about.

RELATED: Reports of documents burned at Chinese Consulate ahead of Friday's eviction

The Chinese Consulate in Houston was the first Chinese consulate opened on U.S. soil back in 1979. The Houston consulate serves the Chinese ex-pat community across eight states that compose the southern United States.

Relations between China and the United States have been even more strained this year as the Trump administration tries to negotiate another trade deal. Despite those growing tensions, Chinese-Americans in Houston were caught off guard by the decision.

"We never thought it would come to the closure of the Chinese consulate in Houston," said local attorney Gordon Quan. "This is just going to add to a growing list of issues between China and the United States and it could harm our community because of concerns that people will have about whether the Chinese can be trusted and what are the Chinese doing in Houston."

"In retaliation, China may basically stop all the investments and tell companies to pull out of here," said Wu.

Houston congressman Rep. Al Green and Chinese Consul General Cai Wei hosted a luncheon in Chinatown on February 10 this year to temper fears the virus had made its way to Texas.

The congressman spoke to KHOU 11 on Wednesday from Washington, D.C.

“I have no idea as to the truth, as to the allegations of spying," Green said. "I don’t condone any spying.”

The congressman said he has not been briefed on the intelligence but said he has already heard from his Asian American constituents.

He said the increased tension between the U.S. and China, along with comments made by President Trump, has them worried.

“I spoke with a businessman today and he explained how people are nervous, and very concerned," Green said. "They don’t know where this is going. They have reason to believe that persons could be harmed by virtue of things that have happened in the past.”

Mayor Sylvester Turner said he's hopeful something can be worked out between the U.S. and Chinese governments.

"It is my hope that whatever the conflict may be it will be resolved, but that's way above my pay grade," Turner said.

And on Tuesday, the Justice Department said hackers working with the Chinese government targeted firms developing coronavirus vaccines and stole hundreds of millions of dollars worth of intellectual property and trade secrets from companies worldwide. The indictment said the hackers in recent months researched vulnerabilities in the computer networks of Massachusetts and Maryland companies known for their work in developing vaccines and treatments. The case was filed this month in federal court in Washington state and was unsealed Tuesday. The indictment includes charges of trade secret theft and wire fraud conspiracy against the hackers, who prosecutors say stole information of interest to the Chinese government.

U.S. Secretary of State Mike Pompeo commented on the situation Wednesday in Denmark:

"It’s not just American intellectual property that's been stolen, it’s been European intellectual property too, causing hundreds – costing hundreds of thousands of jobs, good jobs for hard-working people all across Europe and America stolen by the Chinese Communist Party. You saw yesterday an indictment that the Department of Justice put out related to a set of activities that were taking place not only in the United States but across other countries as well... President Trump has said, 'Enough.' ... We are setting out clear expectations for how the Chinese Communist Party is going to behave, and when they don’t, we’re going to take actions that protect the American people, protect our security, our national security, and also protect our economy and jobs..."

A fire was previously reported at the Chinese consulate in 2017. However, that fire appeared to be different in nature and damaged the building's upper floors.

RELATED: China bans US lawmakers Marco Rubio, Ted Cruz and others over criticism

RELATED: China defends WHO, lashes out at US move to withdraw