Evans hopes his path inspires others to take the same road. 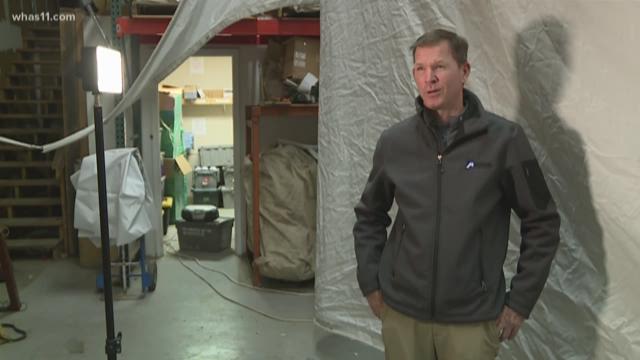 LOUISVILLE, Ky. (WHAS 11)- There are plenty of inspiring stories of people living the American Dream, and Brendan Evans is no exception. The local business owner has a journey that will no doubt leave you inspired.

Born and raised in Zimbabwe, Evans loved his upbringing and spent lots of time playing in “The Bush” in the countryside.

“I just knew there was a bigger world out there, so I wanted to check it out. I’d read books and seen movies, and I just wanted to get out there and experience it all. I always had a dream to leave Zimbabwe and see the rest of the world somehow,” Evans said.

He got his solution one summer when he traveled to the U.K. for a working holiday.

"I started working for a worldwide company setting up tents for sporting events,” Evans said.

It became a job that took him all over.

"Us Zimbabweans are renowned hard workers, they all wanted to hire us Zimbos,” Evans said.

His first trip to America landed him in Louisville for the 1991 Kentucky Derby.

"Immediately, I was taken with the people, especially, and this whole place, and just how friendly everyone was,” Evans said.

A local Waffle House provided a whirlwind introduction to the culture.

“We had our cup of coffee and we put it down. The lady came around again with the thing, and we tried to stop here to tell her we couldn’t afford a second cup. She said ‘honey, it’s bottomless.’ We said what does that mean, and she said you can have as much as you want,” Evans said. “We had a lot to drink and walked out of there with a lot of caffeine in our system, so we were ready to start our day.”

Evans became determined to make it back to the United States and did so years later. He eventually started a family and his own company in the city that first stole his heart.

"The opportunities afforded here are just second to none. There's no way that I could've done this in Zimbabwe,” Evans said. “I still try to remember my roots and how lucky I am to be here. I wake up every day and just thank the lucky stars I’m here, to have what I have and be where I am.”

Eager to continue that growth, he bought Rental Depot last year and merged the two companies.

“It’s very rewarding, and we’re very proud of the work we do,” Evans said.

He’s now able to provide his tents and everything underneath them. It's impressive for anyone, but especially when you consider just how far Evans has come.

“I didn’t go to university. All I had was a high school education. It was a great high school that I went to, but the fact that there was all of this learning available to me here. I just educated myself here in the states. There was just much available to me to keep learning about my trade and to go to conferences and learn the latest trends on stuff,” Evans said. “I don’t know how many birthdays I’ve missed, but hopefully that’ll all come to fruition and we’ll be able to spend more birthdays together later on when we’ve built this great company.”

Evans hopes his path inspires others to take the same road.

“I think a lot of people think they are stuck here with what they have. They don’t see the opportunities that I see, especially Americans. They have everything here that they need to succeed. All they have to do is work hard,” Evans said. “Work harder than the guy next to you and educate yourself because everything’s there. Just go to the library. Read a book. When you work harder than the guy next to you, you’re just going to get a pay raise and get promoted. That’ll just pay dividends in the end.”

His passport is packed full of stamps and stories, but Louisville always calls him back.

"I remember one time getting my passport stamped as I came in, and the guy said welcome home as I came across through customs, and it just really hit home that this really was home and how lucky I was to be here. It was just those few words that meant so much to me."

Evans said he absolutely loves life in Louisville but stays true to his roots. He and his wife take their two kids back to Zimbabwe as much as they can and have even created their own little piece of paradise out on some land in Simpsonville. Evan said he's grateful to sort of mimic his childhood trips to “The Bush” here in the United States.