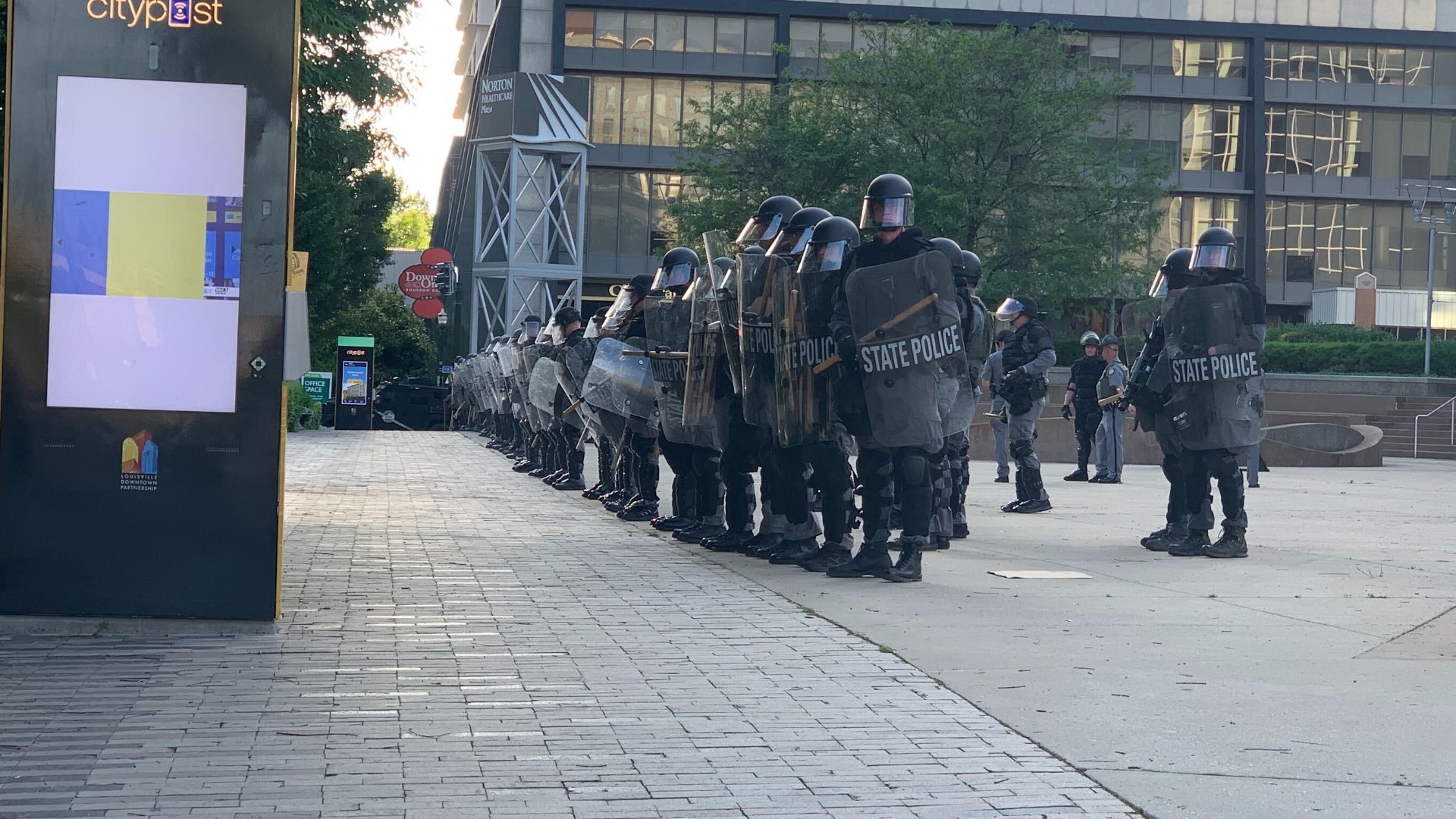 LOUISVILLE, Ky. — WHAS11 has several crews out covering the rally. Here are their Twitter handles if you would to follow them, RT or connect with them.

10:30 p.m. Louisville Metro Police said two people have been arrested during the second night of protests.

Crowds are more spread out through the city, and police said things are escalating, not deescalating. Police also said they believe a large amount of people at the protests are not Louisvillians.

Protesters appear to ready for a long night. Bring a stash of supplies.

6:00 p.m. Crowd grows and situation starts to get intense in downtown Lousiville.

5:15 p.m. The view in downtown Louisville at the start of day 2 of the protests calling for justice in the #BreonnaTaylor case.

One group had already scheduled a rally for Friday night on the steps of Metro Hall. WHAS11's Shay McAlister captured video of them setting up.

Fischer also confirmed seven people were shot in the protests, and one person is still in critical condition. The shots did come from within the crowd, and police did not fire any weapons. One person has been arrested, but LMPD said they have no leads on the shooter. The homicide unit is investigating.

Early Friday morning, city workers began the process of cleaning up parts of downtown following a protest for justice for the death of Breonna Taylor. The protest started around 7 p.m. Thursday.

RELATED: Clean-up underway in aftermath of damage from protests

Thursday evening in downtown Louisville protesters calling for justice in the Breonna Taylor case gathered near the Hall of Justice at 6th and Jefferson.

Taylor was shot and killed by Louisville Metro Police officers on March 13 when they executed a no-knock search warrant at her apartment.

Her death has since gained national attention, and many have called for charges against the officers involved in her death.

"Thank you so much for saying Breona's name tonight. We are not going to stop until we get justice, but we should stop tonight before people get hurt. Please go home, be safe, and be ready to keep fighting. We appreciate it more than you know"

7:00 p.m. - Crowd begins to gather in downtown Louisville chanting 'No justice, no peace. Prosecute the police."

10:00 p.m. Police on the scene, trying to keep the crowd contained.

Mayor Fischer issued the following statement on the protests that took place:

"Last night and early this morning protesters took to the streets in downtown Louisville to express their deep frustration about the Breonna Taylor case. While the situation is still unfolding, we know that were several hours of peaceful protest before some in the crowd turned violent, leading to seven people being people shot from within the crowd. Five are in good condition; two were sent to surgery. My prayers are with all of them. No officers fired their weapons, and my thanks go to the police officers who, despite risk to themselves, got aid to those injured.

I feel the community’s frustration, the anger, the fear. But tonight’s violence and destruction is not the way to solve it.

Breonna’s death was a terrible tragedy. But, as Breonna’s family said tonight, answering violence with violence is not the answer. Gunfire and vandalism does not advance our cause – and it cannot be tolerated."

Fischer went on to say that he supports protesters' First Amendment rights to protest peacefully.

He closed the statement by saying:

"I urge protesters, again, as Breonna’s family said tonight – to say her name. But let’s not see anyone else get hurt. There is only one way forward, and that’s working together. Work for the truth, work for peace, work for justice. For Breonna, her family and for all of Louisville. Our community of Louisville is a place that so many of us love – with all of its beauty and imperfections. We have no choice but to rise to this moment, work together through our challenges and build our city up – for everyone."

LMPD spokesperson Lamont Washington said the they will be providing updates sometime this morning.

LIVE: Protesters call for justice in Breonna Taylor case in downtown Louisville. Disclaimer: this is a live video and may contain graphic images and language More: https://bit.ly/2TOwDDA

HAPPENING NOW: “No justice, no peace, prosecute the police” Ralliers are blocking the streets near Metro and City halls in downtown Louisville in wake of Breonna Taylor case. WHAS11 News

This is a developing story. Check back for updates. WHAS11 has multiple crews in the area.

RELATED: ' A change in policy is not enough.' No-knock warrants should be eliminated, ACLU-Kay says