LOUISVILLE, Ky. — The Louisville Slugger Museum confirms it acquired two photographs of African American ballplayers posed in action shots. The information with the images suggested the players were part of the Louisville White Sox, which was a Negro Leagues team in 1931.

Bailey Mazik, who is a Curatorial Specialist for the museum decided to do some research to learn more about the team and the players. In the process of hunting for answers, Mazik hit a home run. The photos actually depict the Louisville Unions, a pre-Negro Leagues team that dominated the Southern baseball circuit in 1908, the museum confirmed in a news release.

This rare find is an important addition to the documented history of black baseball before the game’s integration, Mazik says.

“During a curatorial investigation it’s incredibly rewarding for me to find meaningful connections that broaden the understanding of baseball in our country and in our culture through time,” said Mazik. “There’s still more I’d like to learn about these photos and this team, but it’s so gratifying to know the Louisville Unions have been rediscovered as a part of baseball’s story, where they belong.”

How she did it?

Mazik says when she noticed the letters on the players’ uniforms were not consistent with the team being the Louisville White Sox she began scrutinizing the images. One of the important clues Mazik noticed was a bourbon distillery beyond the outfield fence. The Sunny Brook Distillery Co. was located at 28th and Broadway from 1897 – 1909. This discovery eventually helped place the team at what turned out to be a historically significant ballfield. 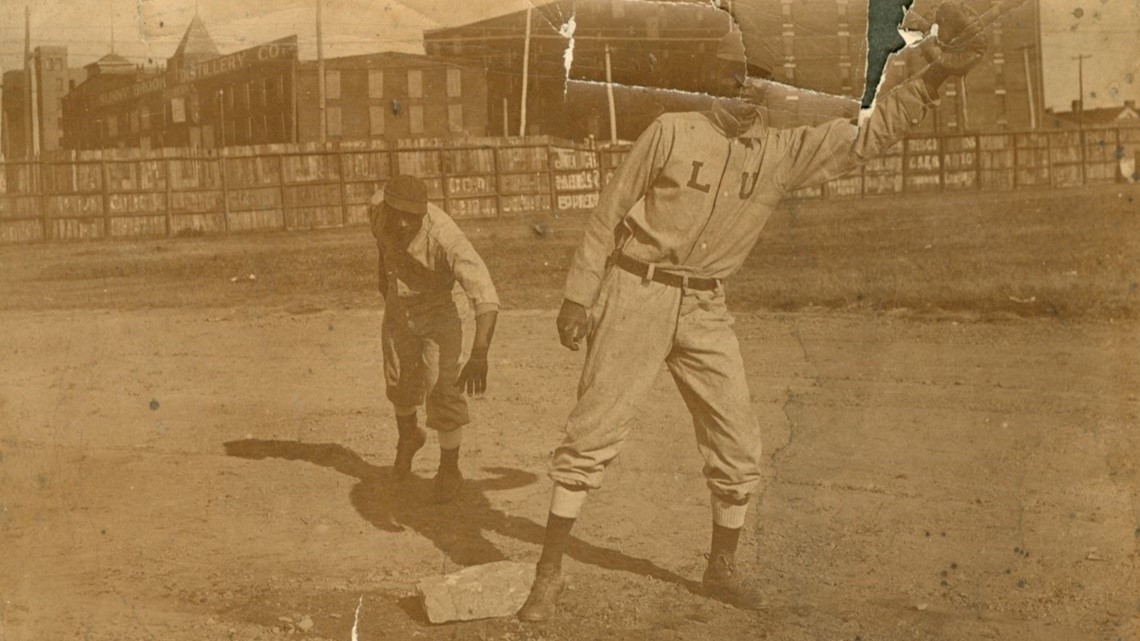 Tip of the bat to The Louisville Courier-Journal. Mazik say they were vital resource in the investigation, providing the necessary information to confirm the Louisville Unions identification. Numerous stories about the Unions in the paper’s 1908 baseball coverage included a description of the squad as being, “the best colored team in the South.”

According to the Courier-Journal, the Unions played other semi-professional and amateur teams, both black and white. Their opponents included other Louisville teams and teams from other states including Ohio, Indiana, and New York. They played in their own ballpark on the west side of Louisville.

Today, the site is home to Elliot Park in the Parkland neighborhood.

“I commend Louisville Slugger Museum & Factory on finding the images and conducting the great detective work in piecing together a partial history of the Louisville Unions. Early 20th-century black baseball history, before the start of the formal Negro Leagues in 1920, is still an underappreciated area of baseball research,” said Dr. Raymond Doswell, Vice-President/Curator of the Negro Leagues Baseball Museum in Kansas City.

“We are fortunate that more and more historians are exploring the time between 1860 – 1920. Much of the detailed information and photographs are hidden away in regional archives still to be uncovered. Discovering the baseball information also illuminates our understanding of black life during this period.”