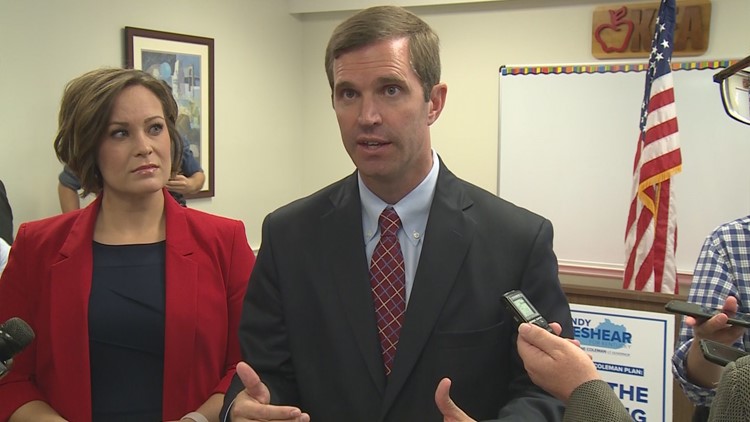 Andy Beshear wants to give public teachers a pay raise

FRANKFORT, Ky. — He's rallied with them, sued on their behalf and now, as he runs for governor of Kentucky with a teacher as a running mate, Andy Beshear wants to give public teachers pay raises.

Wednesday, Attorney General Andy Beshear said he wanted to end what he called "bullying" by Governor Matt Bevin and restore morale of teachers with his proposal.

Flanked by retired educators and alongside his running mate, Jacqueline Coleman, Andy Beshear announced what said would be a "priority" in his first budget.

"Through this governor's bullying, and the current compensation package, people are choosing not to do one of the most critically important jobs out there," said Beshear. “So, this is an investment we must make to have the very best teaching the next generation of our kids.”

Beshear and Coleman want to give teachers a $2,000 raise, create a path to student loan forgiveness for those who commit to teaching long-term and funding for certifications.

The Democrat, Beshear, expects the raises to cost about $84M and promises to find the money. He said he'd cut pay of some Bevin Administration officials but did not outline other cuts or new funding streams.

“More unfunded campaign promises from a career politician. Gov. Bevin has made education a top priority of his administration. He is the first Governor to fully fund teachers' pensions after years of underfunding by Gov. Steve Beshear and past administrations. Under Gov. Bevin’s leadership, SEEK per-pupil spending is at record levels, and 100 percent of lottery funds are going toward education. Andy Beshear is just trying to distract from his support of Hillary Clinton and the liberal agenda that will take our state backwards.”

Beshear and Coleman also want to increase starting teacher salaries to $40,000 per year.

Beshear answered, “I'm a public school graduate. I believe in public schools and my kids will be going to a public middle school. And what my kids got to do, that every Kentucky child should get to do is go to a preschool. And, sadly, there aren't many public preschools around Kentucky. And so they started a preschool at a school that we fell in love with and they've been at that school ever since. But you know what? I paid my property taxes, unlike this governor, every single year because of my support for public education, and you're going to see my kids in a public school with one of them the next year and one of them the next year. And while I've answered that once, Chris, I hope you understand that people's kids should be off limits just like I make sure yours are always off limits.”

When asked whether he was making promises he couldn't keep, Andy Beshear gave a two word answer, "watch me."