Yvette Gentry looks back on experience as interim LMPD chief

She said to succeed, incoming police chief Erika Shields will need to understand what makes Louisville unique and to be able to listen to a wide range of voices. 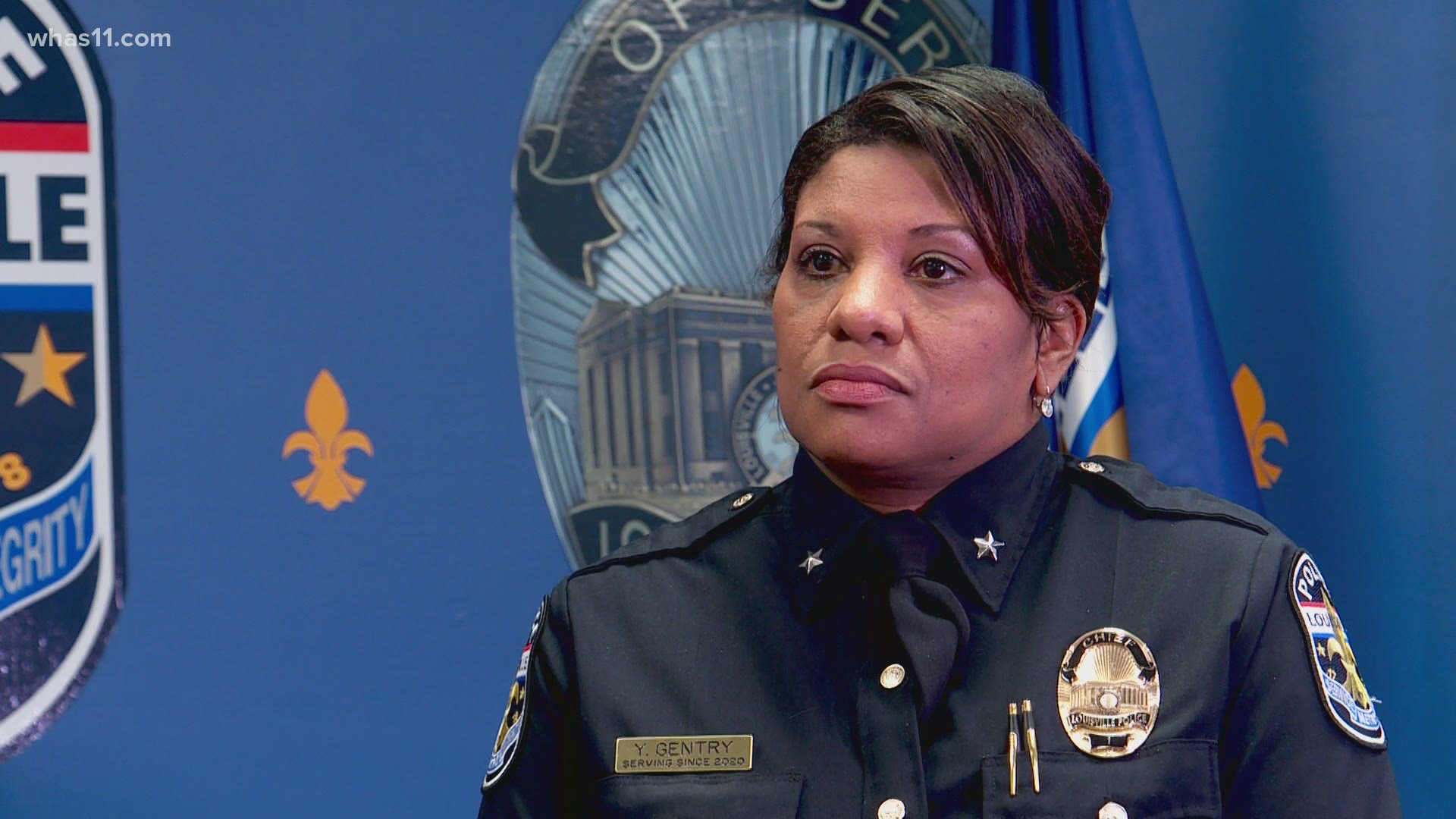 LOUISVILLE, Ky. — As Yvette Gentry prepares to step down and retire from LMPD - permanently this time - she sat down with WHAS11 to talk about her last several months at the helm of the police department.

Gentry took over the department's top post back in October and was tasked with leading a department that faced many issues, including a fractured relationship with the community following the police killing of Breonna Taylor and the protests that followed.

She said to succeed, incoming police chief Erika Shields will need to understand what makes Louisville unique and to be able to listen to a wide range of voices in the community.

WHAS11: What was it like when you made that decision to come out of retirement and return to LMPD?

YVETTE GENTRY: There were a lot of conversations with people close to me, my family mainly, that were like, "Really, you want to do this?" But I'm blessed with a strong, supportive family, strong supportive church family and friends that really made the decision easier after a lot of prayer.

WHAS11: On your first day, you said one of the first things you wanted to do was to take down the boards. You really placed an emphasis on transparency during your time serving as chief. As you prepare to leave, how do you think you've increased transparency at the department?

YG: I did that. I mean I really was committed to that. I talked to a lot of people. I answered as many questions as I could. A lot of stuff I can't answer - it's not for a lack of being transparent, you just can't do it. But for everything else, I gave honest answers. And I got a lot of good feedback from the community and police officers as well that helped me figure out what I was going to do the next day.

WHAS11: Another thing you mentioned when you took over was a desire to improve communication not just with the community but also within the department. How do you feel that has changed in the past few months?

YG: I'm really proud of our communications team here at LMPD. I just felt like we needed to utilize them more. They're good at what they do. They're honest, transparent people and they want to get information out as accurately as they can, as quickly as they can but making sure they know it is accurate. And so I just wanted to let them do what they do. LMPD has good people and I just wasn't seeing them enough and I realized we don't need to reinvent the wheel. We have people who are good, transparent, professional communicators and we need to let them do that. And I try to make sure I do the same thing too, when I need to speak, to speak in my own words, my own way to people.

WHAS11: One of the big things we saw last year was the Breonna Taylor case and the protests and response from the community. There seemed to be a fractured trust with the community. How do you think things have changed over the past few months and what needs to be done in order to build back that trust?

YG: It has to have 100 percent commitment from the police and the community to give each other a chance. You talk about feeling hopeless and having heavy hearts, and there are heavy hearts both internally and externally. People talk about, "You've got to build better community relationships," that has to happen one officer and one citizen at a time. Everyone has to be open. When you're shouting at each other and there's a level of intensity, it's going to take time to rebuild those relationships. But that legitimacy and trust comes one relationship at a time.

For leadership, you don't have 500,000 contacts with the community a year and not make mistakes. You've just got to own it, and you've got to own it quickly and say, "Hey, we're going to do everything we can to make it right, and to do the best we can." And police officers need to hear clear, precise instructions from their leaders.

WHAS11: I understand you cannot speak about the Taylor case or the terminations of Detectives Myles Cosgrove and Joshua Jaynes, but do you feel there has been the beginnings of a rebuilding of trust with the community?

YG: I certainly hope so, and not just because of one decision here or there, but for people to see you can just be a regular person out here and you're just trying to do the right thing. They might not agree with everything I do but it's a tough thing to decide who gets to have life and liberty and discretion over the community. And those decisions don't come easy, but when you respect the profession and love your city, you do what you do.

WHAS11: You also inherited a department that is understaffed and overworked. A big part of that is because of the budget and those problems aren't likely to go away any time soon. How do you address that issue of not having enough staff when you have those constraints that will likely continue for a few more years.

YG: The biggest challenge is getting 200 more women and men in the police department. They need more people. Two hundred people down is a lot. I don't talk about that a lot because I don't want the community to have angst that LMPD can't respond to whatever you need. They can, but they need more bodies to do it more effectively. A big part of that is recruitment and retention, and we need to make sure we're holding onto the ones we have. We've lost a lot of subject matter experts. So that's a big part of it, but that's a reason we need to come together and take the temperature down and realize this is a good profession. We need people from all walks of life.

WHAS11: What's the biggest piece of advice you would give to incoming police chief Erika Shields?

YG: I just hope that she's given the chance to slow down. She's coming from a city [Atlanta] that's very different from Louisville, Kentucky. I hope she's allowed to slow down enough to get to know the men and women here and get to know the city and then take her expertise to make a plan that will lead us to a much safer place and I guess more stability for the people who work here.

Louisville is a small city with a lot of people, and so it's very different. It's not just about the demographics. It's a very small group of people who are the movers and shakers and you can find yourself listening to this echo chamber of people, but you've got to get out there and really learn. It frustrates me when people say, "People in West Louisville say." West Louisville has more than five people who speak for them. It's a beautifully diverse group of 65,000 people or more that have differing opinions so get out there and talk to them.

YG: I had a great life and Rajon Rondo Foundation and United Metro Way both gave me leave of absences that did not last forever, and so I'll be going back to those jobs in February. I'm going to take a few weeks off and spend some time with my kids. They are 10th graders, NTI, doing it themselves. And just decompress for a minute. There were a lot of days in a row worked and I want to take a break and figure out what I want to do when I get back to the nonprofit world.

WHAS11: So is this it? We won't have a third stint with LMPD?

YG: This is it! Old girl is tired! I knew it was a temporary thing and I wanted to leave them in a place where they could see some sunshine and some hope.