A Chesapeake homeowner says he feels "violated" after someone hacked his email and Ring account, faking a suicide call and claiming to make money on a livestream. 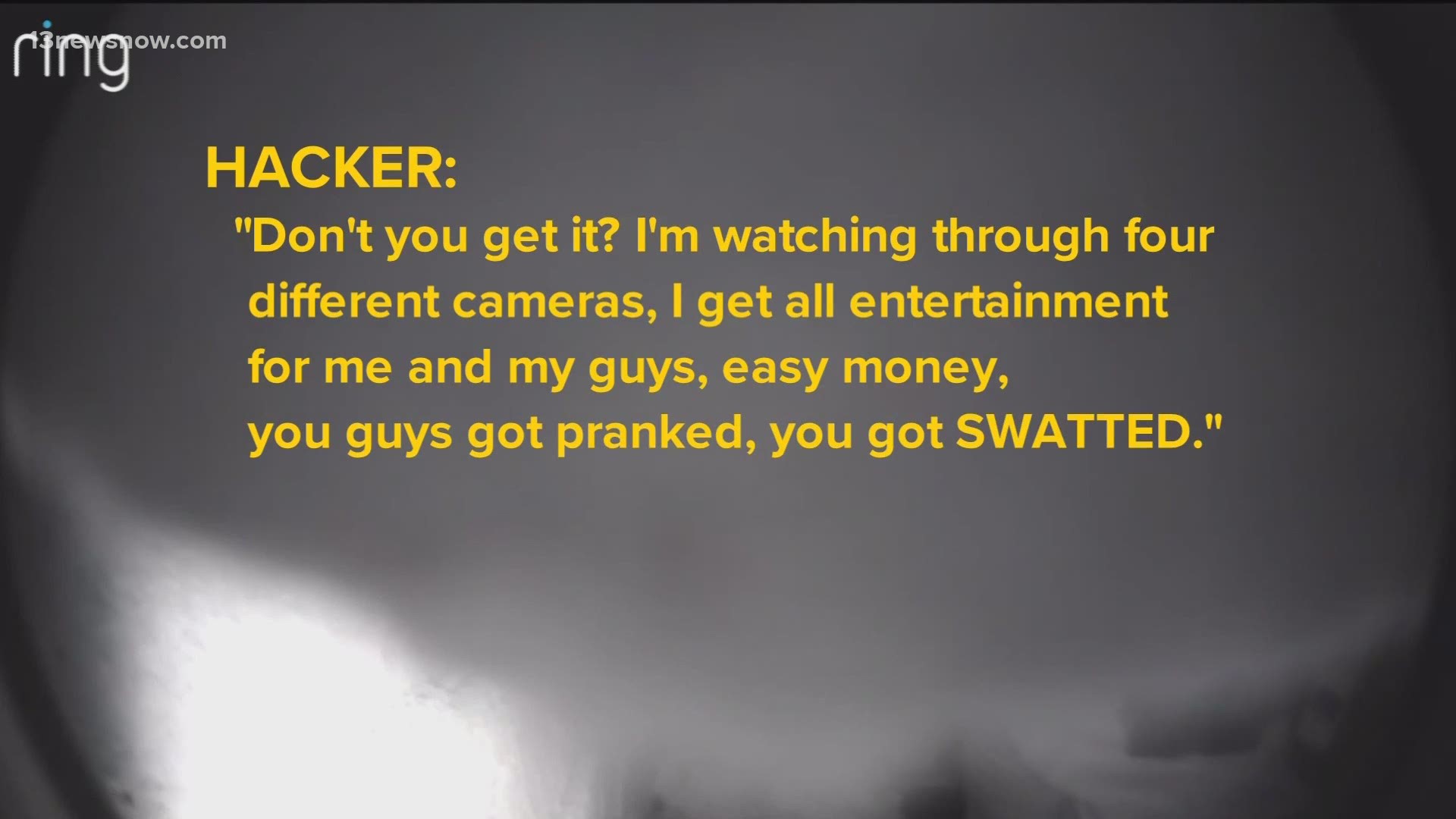 CHESAPEAKE, Va. — A Chesapeake family is the victim of a "swatting" hoax after someone hacked their Ring cameras and called police for entertainment.

“You feel pretty violated, something that’s supposed to be a security setup ends up being exactly the opposite," Ray Ballance said.

On November 10 around 1 a.m., Chesapeake Police showed up at Ballance's home after receiving a hoax 911 call claiming a family member may commit suicide.

Through the family's four Ring cameras, a hacker screamed, "Help me!" as officers checked inside the home to make sure everyone was safe.

Back outside, the officers realized the intermittent screaming was coming from the home's Ring cameras.

"Finally, I guess whoever it was on the camera decided the fun was over," Ballance said.

A man started talking to the officers through the cameras, saying he hacked the homeowner's accounts and faked the 911 call.

Officer: “What is it that you need from us?”

Hacker: “Oh nothing, we were just [messing] around, after this we’ll log out, tell him to change his Yahoo password, his Ring password, and stop using the same passwords for the same [stuff]."

Chesapeake Police officers covered up the cameras and asked who was screaming. The hacker told officers it was him yelling for help, claiming he livestreamed the Ring cameras when officers arrived and charged people five dollars each to watch online.

"It’s a made-up story, it got you there didn’t it?" the hacker told police. "I’m watching through four different cameras, I get all entertainment for me and my guys, easy money. You guys got pranked, you got swatted.”

“The scary part is that he tells the police there’s something violent getting ready to go down, so the police come up to the door expecting the worst, and you’re unsuspecting and in bed when all this happens," Ballance said.

A Chesapeake Police Department spokesperson said he remembers only one other swatting report like this one. The incident is under investigation.

“Make sure that you have your two-factor authentication set up," he said. "The other mistake I made is I used the same password on a lot of different accounts, just because it’s easy. So, once they get one they’re going to try them all.”

Ballance believes the hacker accessed his home’s cameras through his email and Amazon accounts.

The Chesapeake swatting call is one of multiple hacks connected to Ring cameras reported across the country in the last month.

In a statement, Ring said: "Based on our ongoing investigation, a small number of Ring accounts appear to have been accessed by bad actors using compromised email accounts — Ring systems were not compromised. We promptly notified these customers and reset their Ring passwords so they could secure both their Ring and personal email accounts. Swatting is a serious crime and we’re working with law enforcement to hold the bad actors accountable and protect customers."

The Chesapeake officers left the Ballance home after talking with the hacker. The man used vulgar and disparaging language with the officers.

Officer: “Well, we’re done entertaining you for this evening.”