Nick Sandmann claims that he never interacted with Nathan Phillips and that he believes his actions were "helping to diffuse the situation." 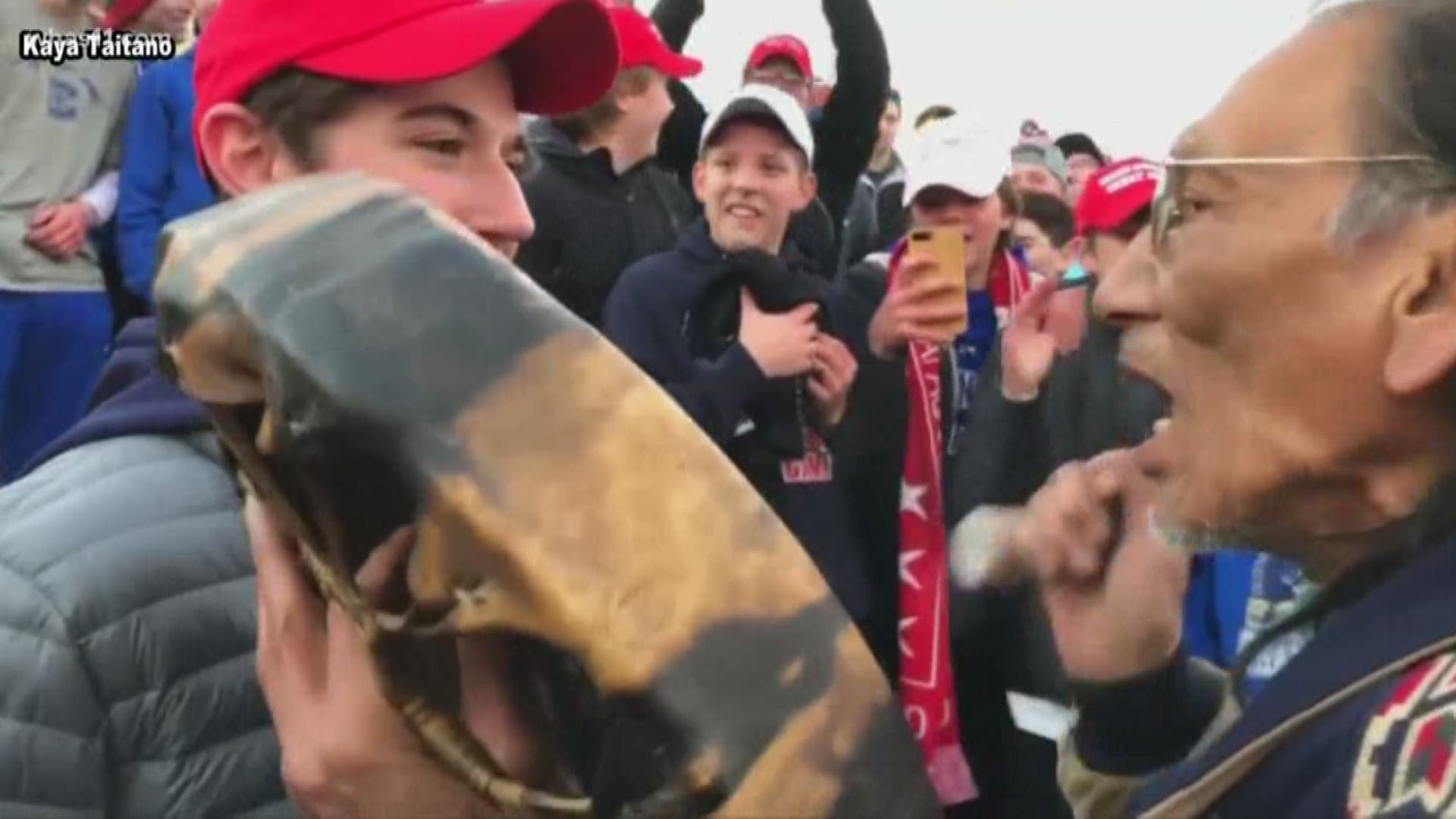 After a video of an apparent confrontation between Kentucky high school students and Native American protesters went viral, one of the students involved in the incident has come forward.

Nick Sandmann, a junior at Covington Catholic High School, issued a statement to the media on Sunday evening.

The Covington students were visiting Washington D.C. to attend a March for Life rally when they crossed paths with the members of the Indigenous Peoples March.

A short clip of the students appearing to harass a small group of Native American protesters quickly went viral, with countless viewers expressing their outrage on social media.

Nathan Phillips, a 64-year-old Native American man singing and playing a drum in the video, said that the students were mocking him.

“When I was there singing, I heard them saying ‘Build that wall, build that wall,’” Phillips said in a video posted on Instagram.

However, Sandmann claims that he never interacted with Phillips and that he believed his actions were "helping to diffuse the situation." He said that "outright lies" are being spread about himself and his family.

"I am being called every name in the book, including a racist, and I will not stand for this mob-like character assassination of my family’s name," Sandmann said in the statement.

A video uploaded to YouTube claims to show the "full incident" and lasts nearly two hours. The video is from the perspective of an African American man who appears to taunt the students, using racist and homophobic language, as Sandmann describes in his statement.

WARNING: This video contains copious amounts of explicit language that some viewers may find offensive. We have chosen to include the video to offer further context to this story, but we advise that you watch with caution.

The Roman Catholic Diocese of Covington and Covington Catholic High School are investigating the situation will take “appropriate action, up to and including expulsion,” according to The Associated Press.

You can read Nick Sandmann's full statement below:

I am providing this factual account of what happened on Friday afternoon at the Lincoln Memorial to correct misinformation and outright lies being spread about my family and me.

I am the student in the video who was confronted by the Native American protestor. I arrived at the Lincoln Memorial at 4:30 p.m. I was told to be there by 5:30 p.m., when our busses were due to leave Washington for the trip back to Kentucky. We had been attending the March for Life rally, and then had split up into small groups to do sightseeing.

When we arrived, we noticed four African American protestors who were also on the steps of the Lincoln Memorial. I am not sure what they were protesting, and I did not interact with them. I did hear them direct derogatory insults at our school group.

The protestors said hateful things. They called us “racists,” “bigots,” “white crackers,” “faggots,” and “incest kids.” They also taunted an African American student from my school by telling him that we would “harvest his organs.” I have no idea what that insult means, but it was startling to hear.

Because we were being loudly attacked and taunted in public, a student in our group asked one of our teacher chaperones for permission to begin our school spirit chants to counter the hateful things that were being shouted at our group. The chants are commonly used at sporting events. They are all positive in nature and sound like what you would hear at any high school. Our chaperone gave us permission to use our school chants. We would not have done that without obtaining permission from the adults in charge of our group.

At no time did I hear any student chant anything other than the school spirit chants. I did not witness or hear any students chant “build that wall” or anything hateful or racist at any time. Assertions to the contrary are simply false. Our chants were loud because we wanted to drown out the hateful comments that were being shouted at us by the protestors.

The protestor everyone has seen in the video began playing his drum as he waded into the crowd, which parted for him. I did not see anyone try to block his path. He locked eyes with me and approached me, coming within inches of my face. He played his drum the entire time he was in my face.

I never interacted with this protestor. I did not speak to him. I did not make any hand gestures or other aggressive moves. To be honest, I was startled and confused as to why he had approached me. We had already been yelled at by another group of protestors, and when the second group approached I was worried that a situation was getting out of control where adults were attempting to provoke teenagers.

I believed that by remaining motionless and calm, I was helping to diffuse the situation. I realized everyone had cameras and that perhaps a group of adults was trying to provoke a group of teenagers into a larger conflict. I said a silent prayer that the situation would not get out of hand.

During the period of the drumming, a member of the protestor’s entourage began yelling at a fellow student that we “stole our land” and that we should “go back to Europe.” I heard one of my fellow students begin to respond. I motioned to my classmate and tried to get him to stop engaging with the protestor, as I was still in the mindset that we needed to calm down tensions.

I never felt like I was blocking the Native American protestor. He did not make any attempt to go around me. It was clear to me that he had singled me out for a confrontation, although I am not sure why.

The engagement ended when one of our teachers told me the busses had arrived and it was time to go. I obeyed my teacher and simply walked to the busses. At that moment, I thought I had diffused the situation by remaining calm, and I was thankful nothing physical had occurred.

I never understood why either of the two groups of protestors were engaging with us, or exactly what they were protesting at the Lincoln Memorial. We were simply there to meet a bus, not become central players in a media spectacle. This is the first time in my life I’ve ever encountered any sort of public protest, let alone this kind of confrontation or demonstration.

I was not intentionally making faces at the protestor. I did smile at one point because I wanted him to know that I was not going to become angry, intimidated or be provoked into a larger confrontation. I am a faithful Christian and practicing Catholic, and I always try to live up to the ideals my faith teaches me – to remain respectful of others, and to take no action that would lead to conflict or violence.

I harbor no ill will for this person. I respect this person’s right to protest and engage in free speech activities, and I support his chanting on the steps of the Lincoln Memorial any day of the week. I believe he should re-think his tactics of invading the personal space of others, but that is his choice to make.

I am being called every name in the book, including a racist, and I will not stand for this mob-like character assassination of my family’s name. My parents were not on the trip, and I strive to represent my family in a respectful way in all public settings.

I have received physical and death threats via social media, as well as hateful insults. One person threatened to harm me at school, and one person claims to live in my neighborhood. My parents are receiving death and professional threats because of the social media mob that has formed over this issue.

I love my school, my teachers and my classmates. I work hard to achieve good grades and to participate in several extracurricular activities. I am mortified that so many people have come to believe something that did not happen – that students from my school were chanting or acting in a racist fashion toward African Americans or Native Americans. I did not do that, do not have hateful feelings in my heart, and did not witness any of my classmates doing that.

I cannot speak for everyone, only for myself. But I can tell you my experience with Covington Catholic is that students are respectful of all races and cultures. We also support everyone’s right to free speech.

I have read that Mr. Phillips is a veteran of the United States Marines. I thank him for his service and am grateful to anyone who puts on the uniform to defend our nation. If anyone has earned the right to speak freely, it is a U.S. Marine veteran.

I can only speak for myself and what I observed and felt at the time. But I would caution everyone passing judgement based on a few seconds of video to watch the longer video clips that are on the internet, as they show a much different story than is being portrayed by people with agendas.

I provided this account of events to the Diocese of Covington so they may know exactly what happened, and I stand ready and willing to cooperate with any investigation they are conducting.