Kentucky has grandparent rights protected by law. Why aren’t they helping Sherry Ballard?

The mother of Crystal Rogers said she is tired of staying silent after she was denied the right to see her grandchild. 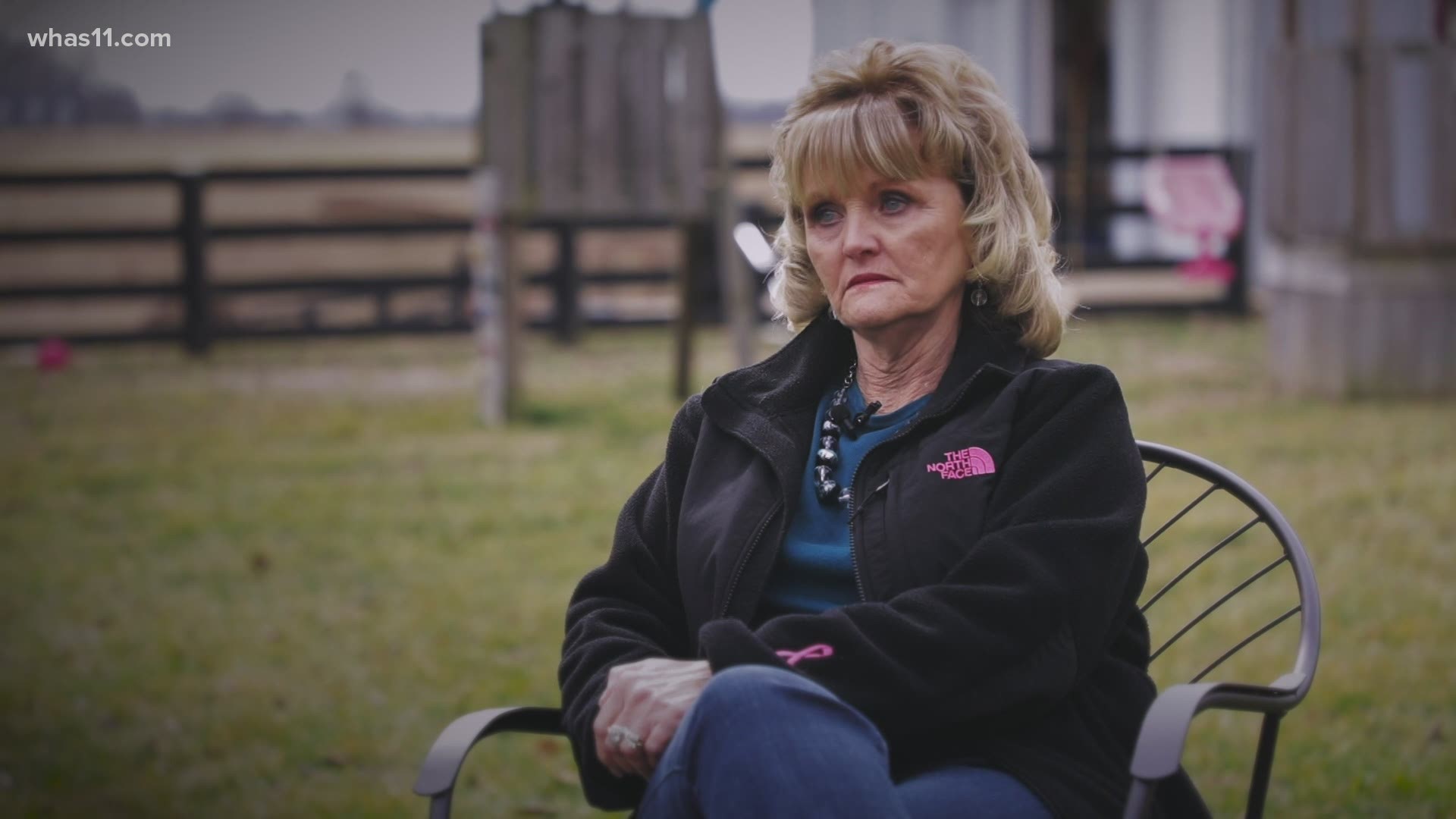 Years later, Ballard is becoming more vocal about a third case: her fight for the right to see her grandson.

"I was told from day one if I spoke about any court proceedings, if I mentioned Eli...I would lose my visitation rights. The courts would hold that against me," Ballard said. "And I did that. I did that the whole time. I did that for six years almost now until recently and I made a huge, huge decision."

"She knew I would take care of her kids"

Since her daughter went missing in 2015, Ballard has been raising four of Crystal Rogers' children as her own.

"This is their home, they were used to being here," Ballard said. "They would visit me all the time, my daughter did. She knew I would take care of her kids. That was not even a decision for me, it was just automatic."

That's why Ballard said it was difficult to digest recent court documents claiming contact with one of her grandchildren could cause significant emotional harm.

"For them to think I'm some kind of unfit grandmother for my grandson, it's very hard for me to even think about because I love that baby," Ballard said.

That baby is Rogers' youngest son, Eli. He was only two when his mother went missing, and has been with his father, Brooks Houck, since then. Ballard said she has not seen him in two years.

A lengthy custody battle between Houck and Ballard started as early as July 2015, the same month Rogers went missing.

Sherry and Tommy Ballard came to court between searches for their missing daughter, facing the man named the main suspect in her case. The Ballards cited evidence that before Rogers went missing they played a major role in their grandson's life.

Six months later, a judge granted short visits with the child every other Saturday. But he still wasn't allowed to see his four other siblings.

"You know we did what we had to do. I had to come home, and tell these kids that lived here...his sisters and brother, that they could not see him," Ballard said. "That tore my heart out to do that. As much as I missed him and I wanted to see him, I wanted them kids to see their brother."

"What did you do to my mommy?"

The Ballards were eventually granted longer visits, including full weekends and some holidays, until one accusation stopped it all.

"Brooks told the courts that something was said," Ballard said. "Eli came home and told him that someone said something about his father, in my home, on a visit."

According to court documents, Houck testified that after returning from visits with the Ballards, Eli was sullen and uncooperative. Houck said his son was accusatory, asking his father, "What did you do to my mommy?"

Ballard has publicly accused Houck of harming her daughter. She said she remembers pulling over to talk to Houck on her way to report Rogers as missing. When she saw her grandson peek out and smile at her, she said she "knew instantly" that "her daughter was not missing."

Still, Ballard said she never talked to her grandson about it. She also claimed she wasn't given a chance to defend herself or what was alleged to have happened in her home when it was brought up in court. Ballard also said the court did not talk to her grandson.

"They just ripped that baby away from me, you know," Ballard said. "I didn't even get to prove anything."

Months later, lawmakers introduced a bill that would expand the rights of grandparents in Kentucky, providing hope.

House Bill 517 created a presumption that grandparent visitation is in the child's best interest when there is a significant relationship between the two and a parent is deceased.

"We were having this problem of grandparents being shunned because their child was no longer in the picture, but had their child not overdosed, for example, there would have been visitation," said state Rep. Chad McCoy, the bill's sponsor.

The bill was signed into law in April 2018, coming at a time when more grandparents were raising their children's children than ever before. Research showed more than 13 million children are living in homes with their grandparents in the U.S. and nearly 3 million grandparents have primary custody of their grandchildren.

McCoy said opioids were the reason so many parents were losing custody of their children or forfeiting their rights in Kentucky. Ballard's case was different — the mother presumed dead by police, but not by law.

"Most things key off when you have died, and we have no way to know if she's still alive or not alive," McCoy said. "We have a law that says you are presumed dead if you have been absent for more than seven years, so we're kind of in this waiting game. Nothing can really happen until we get passed that."

Ballard took the case back to court following the passing of HB 517, asking for another hearing, but Houck challenged the law's constitutionality. He won late last year in the Court of Appeals, a result McCoy said is not uncommon.

"It's still a good law, it's still there, it’s still available, but grandparent rights in general frequently get challenged," McCoy said.

In February 2021, a judge made a final ruling in Ballard's case, saying there is "clear and convincing evidence significant hostility exists" between the Ballards and Houck that could pose a risk of emotional harm to the child.

"They deem me an unfit grandmother? They're scared because there's too much animosity? How can there not be animosity between me and the person took my daughter from me," Ballard said.

Denied any rights to see her grandchild, Ballard said she is tired of being silent.

"My daughter is missing, the person who is the main suspect is the father and I have tried to put that deep down. And I do that for Eli, I do," Ballard said. "But I think the court expects me to just forget that my daughter is missing — I should forget that he's the number one suspect. They've used every thing against me in court."

Ballard said she plans to continue fighting for the right to see her grandson, and rights for other grandparents engaged in similar battles.

"What can I lose? How convenient is it for the courts for me to just sit here and be quiet and just take everything they dish out to me," Ballard said. "I refuse to do that anymore. I'm not losing anything because I'm not getting anything."

Ballard will take her fight to the steps of the Nelson County Courthouse with a rally Saturday at 2 p.m. She said she hopes her "Fight for Eli" will raise awareness for the breakdown in the grandparents rights law, and show judges she is not finished fighting.

"We've lost another person in our family and I just can't accept that," Ballard said.

The FBI took over the Rogers investigation in 2020, announcing plans to conduct dozens of interviews and searching the homes of Brooks Houck and his family. They did not offer a timeline for the investigation.

The Bardstown podcast, which details developments in the Rogers case, is available on Apple Podcasts or any other streaming service.