Jefferson County now has 1,092 confirmed total cases of the virus. 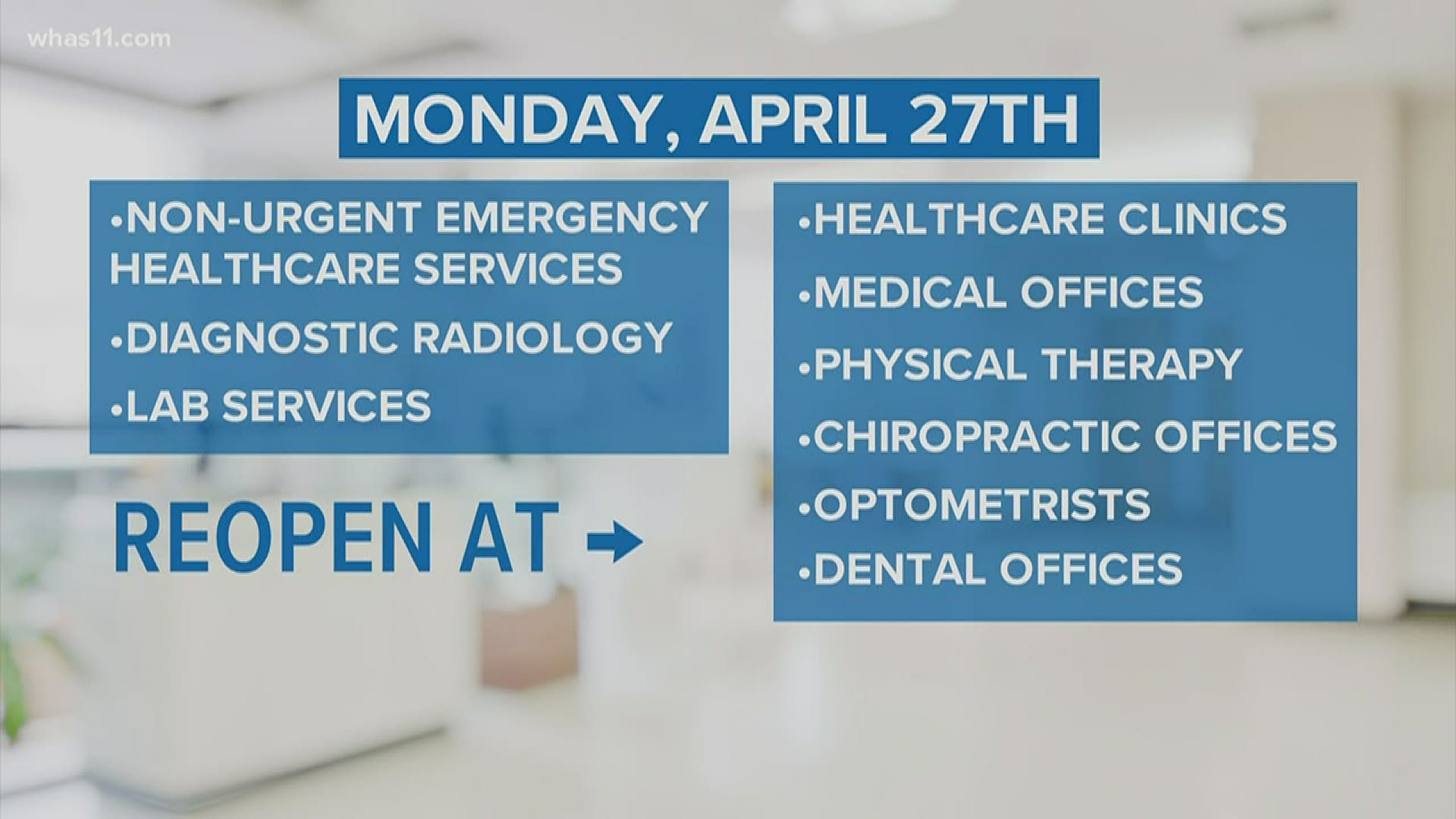 Gov. Andy Beshear says with expanded tested, the state now has 202 new COVID-19 cases. Three more people have also died from the virus. The state's total number of cases are 4,074 and deaths are 208.

"This is a more controlled environment to start and to learn from," Gov. Beshear said Sunday.

*Note: this guidance does not apply to long-term care settings, prisons, other industries, or other settings for which separate guidance has already or will in the future provided.

All patients and other persons in healthcare office/facility must:

Both Dr. Stack and the governor made it clear that if any businesses can't meet all of the health safety requirements for operating, they cannot open tomorrow.

"Just because you can open tomorrow, doesn't mean you should unless you're able to comply with all of their requirements in here," Dr. Stack said.

"It doesn't matter if somebody else in your industry can meet them and you can't. If you cant meet them, you cant re-open," Beshear added. "To do these things, the private sector is going to have to be able to meet higher standards to make sure we can do this safely."

Beshear also suggested everyone get cloth masks in the coming week, as they will become more necessary as Kentucky begins to re-open.

"Over the next week you probably ought to get a cloth mask of some type," he said. "The requirements and the suggestions on masks are just going to increase as we are able to do more."

The governor also announced he will lay out a bigger schedule Monday for the opening of other healthcare services.

He also plans to reveal a possible date state officials will begin phase one of re-opening in Kentucky.

The mayor says 519 have recovered.

He's continuing to urge people to stay home if they can and practice social distancing if going out on essential runs.

The governor says he believes the 5 new deaths were all from senior living facilities. He did get into those numbers. So far, 602 residents and 273 staff members at those facilities have tested positive for the virus. 94 residents have have died.

Kentucky says 46,558 tests have been processed by labs. There are 301 people currently hospitalized and 164 of those are currently in ICU. Beshear says 1,501 people have recovered.

Beshear says 11 testing sites will be available from April 27 through May 1 in Louisville, Lexington, Bowling Green, Cadiz, Hopkinsville, Hazard, Mt. Vernon, and Murray, Kentucky. Many of these sites have already filled all of their openings. For more information, visit: http://krogerhealth.com/COVIDTesting

The governor says the goal for the unemployment system us to get anyone that applied in March that hasn't been help to be taken care of this week.

Gov. Beshear announced that dentist offices will not be reopening on Monday with other healthcare services. He says the facilities have to agree upon guidelines of keeping medical staff and patients safe.

Fischer also says 507 have recovered from the virus.

The total number of tests performed in the state is now 44,962. The governor said that is expected to grow with an additional 11 drive-thru testing sites opening across the state next week. That includes a new partnership with Walmart, which will be opening a testing site at the Bashford Manor location in Louisville on April 29. Testing will be available  seven days a week from 9 a.m. to 4 p.m. for first responders, healthcare workers, and anyone 18 or older exhibiting symptoms.

352 inmates in county jails will be released. The individuals will be inmates convicted of state crimes which were non-violent and non-sexual in nature, and near the end of their sentence. Those released have been determined to be in the COVID-19 high risk category. When they are released they will have to quarantine for 14 days, and they must not reoffend.

The state says they have processed more than 550,000 unemployment claims since March 16 and paid nearly $1 billion.

Kentucky confirmed 161 new cases of COVID-19. That brings the state's total to 3,481. Six more deaths were also confirmed, bringing the total deaths attributed to the virus to 191.

Across the state, 42,844 people have been tested. The governor said there has been a large increase in testing over the last three days.

The state gave more specific details on their plan to reopen healthcare services. On Monday, April 28, they plan to resume non-urgent and non-emergent healthcare services, diagnostic radiology, laboratory services, physical therapy, chiropractic and optometry. Dental services may also resume as long as offices have enhanced aerosol protections. Telehealth should still be used as much as possible. Visitors will not be allowed except for certain cases involving minors and vulnerable individuals. Traditional waiting areas should be eliminated, and offices should enhance hygiene and safety measures.

Kentucky will be ramping up testing at long-term care facilities across the state.

Governor Andy Beshear announced, beginning April 27, Kentucky will roll out phase one of Healthy at Work which will include the reopening of certain healthcare services. If that works, the types of services which will reopen will be able to expand.

New drive-thru COVID-19 testing sites will be available across the state. Notably, in Louisville and Lexington, drive-thru testing will be available "in or proximate to predominantly African American neighborhoods," the governor said. The virus has disproportionately impacted African Americans, especially in the death rates. These sites will open April 27 and run Monday-Friday for two weeks. Masks and sanitizer will be provided to those who are tested. Additional drive-thru testing will be offered in Owensboro, Bowling Green and Lexington.

Beshear said the cases have plateaued, but there has not yet been a decline.

Louisville Mayor Greg Fischer announced there have been 931 total confirmed COVID-19 cases in Jefferson County. There have been 77 deaths thus far.

Six more people have died since yesterday's announcement. Those deaths include a:

The mayor gave updates on first-responders and inmates in Jefferson County, saying there have been zero positive tests in Metro Corrections. Twelve first-responders have tested positive, and nine of those 12 have returned back to work.

Fischer also said he is presenting his budget proposal to Metro Council tomorrow.

Beshear says long-term health facilities continue to see more cases. Since Monday, the governor confirmed 46 additional residents, 12 staff and 13 new deaths (These are all included in the current counts).

Beshear also highlighted one of the deaths included in Tuesday's count. He says the husband of a Hopkins County woman who passed away from COVID-19 has also died from the disease. Ninety-year-old Air Force veteran John Woods died Monday.

Kentucky officials also held a wreath-laying ceremony to honor those who have died from COVID-19 in Frankfort.

As of Tuesday, there have been 907 confirmed cases of COVID-19 in Louisville, with 440 recoveries. There have been 3 additional deaths since Monday, bringing the Louisville total to 71.

Currently, 11 members of LMPD, Louisville Fire, Metro EMS, Metro Corrections and the Sheriff’s Office are off-duty due to COVID-19:

2 are off with positive tests and in self-isolation.

5 are off and quarantined due to exposure to someone with a positive test.

4 are “screened off” with symptoms and have been tested but have not received test results.

10 have fully recovered and returned to duty.

94 inmates have been tested.

So far, 32,830 Kentuckians have been tested for the virus.

The Governor said with about 76% of the known cases accounted for, 76.93% of Kentuckians who tested positive were Caucasian, 13.67% were African-American, 5.28% were multiracial, 4.07% were Asian and 0.05% were Native American or Alaskan Native.

The Governor also said with about 71% of the known cases accounted for, 92.49% of people who tested positive were non-Hispanic and 7.51% were Hispanic.

On fatalities attributed to the coronavirus, with about 80% of the known cases accounted for, Kentucky deaths are about 75.61% Caucasian, 21.96% African-American, 1.63% Asian and 0.81% were multiracial.

On fatalities attributed to the coronavirus, with about 76% of the known cases accounted for, Kentucky deaths are about 99.17% non-Hispanic and 0.83% Hispanic.

Lt. Governor Jaqueline Coleman says the state has processed double the claims since March 8 as they did in all of 2019. She says they are receiving an average of 13,000 new claims filed and 25,000 phone calls daily.

She urged those that if they have applied, don’t reapply or open another claim.

Coleman says the only ones who should be reapplying are those whose benefits have expired.

Call wait times went from 2 hours to 6 minutes. They now have an automated system that will call and update those who will receive benefits on when they will get their payments.

Kentucky Kingdom announced plans to reopen in June. According to the amusement park, the exact date will be determined by the ongoing COVID-19 situation.

Louisville Slugger and furloughed most of their staff amid the coronavirus crisis. The furloughed employees will still receive benefits.

UPS announced donations to local nonprofits totaling nearly $300,000. The donations are intended to provide relief during the COVID-19 pandemic. Regional grants were awarded to the One Louisville: COVID-19 Response Fund, Volunteers of America, WaterStep and other local non-profits.

Gov. Andy Beshear will discuss plans for the rest of the academic year with superintendents today.