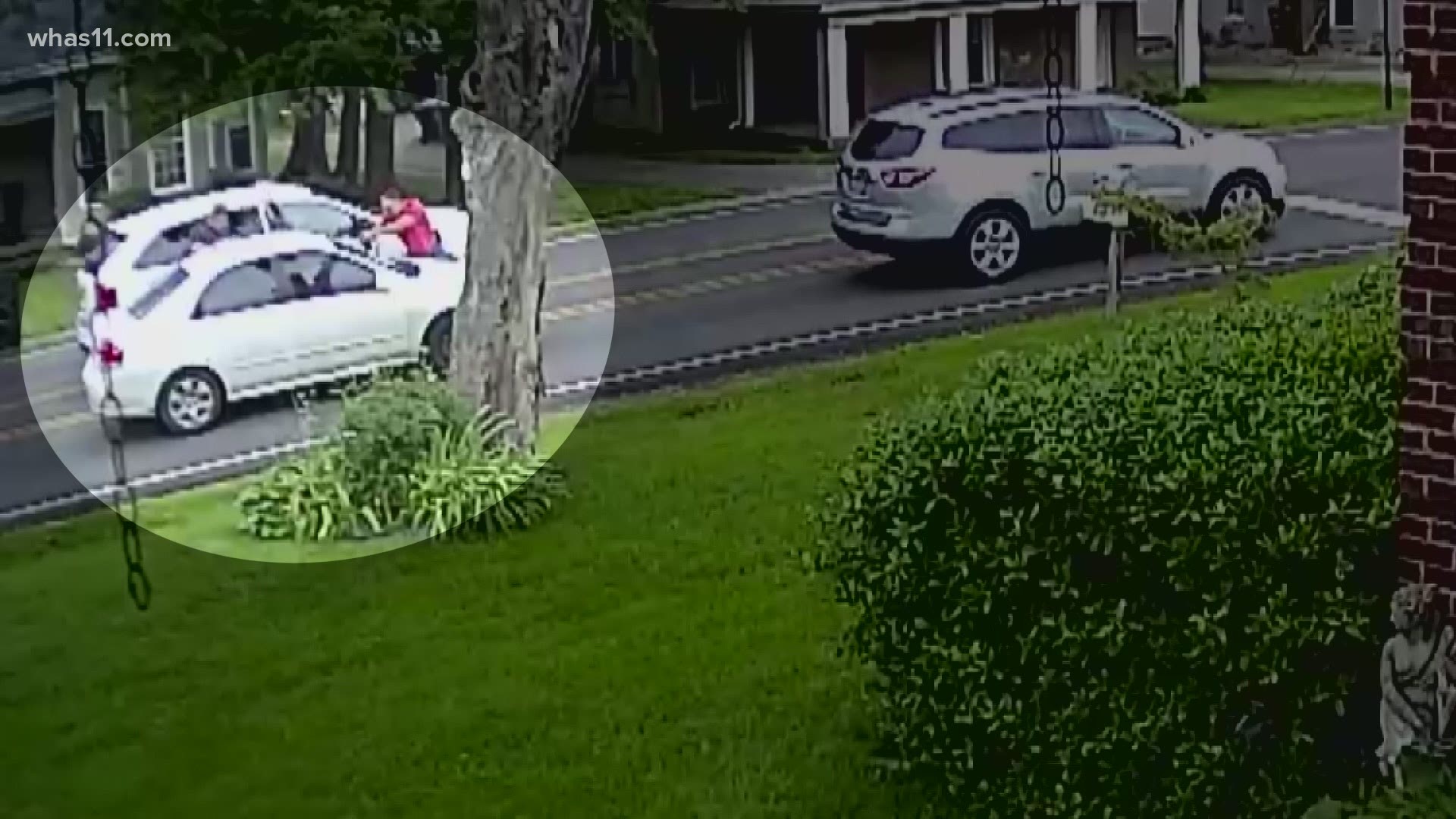 LOUISVILLE, Ky. — New video shows the moments an LMPD officer shot and killed an unarmed man during a traffic stop nearly two years ago in May 2019.

LMPD came out the next day to say there were no body cameras being worn by the plain clothes officers and no video showing what happened.

Now, we're seeing a neighbor's home security camera footage that captured the moments leading up to and during the shooting.

LMPD's robbery unit made the stop on a car connected to a string of violent robberies on May 15, 2019 in Jeffersontown. It happened around 10:30 a.m. near Watterson Trail and Ruckriegel Parkway.

Officers tried to make an investigative traffic stop on a vehicle they believed was involved in several robberies in the metro area. LMPD said the driver of that vehicle was identified as 30-year-old D'Juantez Mitchell.

LMPD officer Bryan Arnold shot and killed Mitchell during that interaction but those moments have never been seen on video until now. LMPD Robbery Unit investigators wore plain clothes and weren't required to have body-worn or dash cameras.

"In this case we have neither of these types of videos to share," then-LMPD Chief Steve Conrad said during a press conference about the shooting the next day.

"That was one of the big red flags from the beginning of the case. How were four officers present, one from J-Town and three from LMPD and there's zero video footage of this incident?" Attorney Greg Simms said.

Attorneys Greg Simms and Hal Friedman, representing Mitchell's estate, filed a wrongful death lawsuit in 2020. The two believe the video paints a different picture of what happened than what LMPD first described in 2019.

"It is not consistent with the narrative LMPD put out on this case," Simms said,

In 2019, Conrad and Lt. Aaron Crowell, with the LMPD Public Integrity Unit,  described what happened.

"Detectives conducted multiple surveillance of Mitchell while requesting additional units to respond to assist with that surveillance and the subsequent stop," Crowell said in 2019.

In the security video, the shooting happens within a matter of seconds. It shows the start of the stop when Mitchell's car is stopped by an unmarked LMPD vehicle and surrounded by three plain clothed LMPD officers with guns drawn.

There's no original audio on the footage but LMPD PIU reports show officers said they gave verbal commands to Mitchell. In the report, investigators cite Arnold saying he told Mitchell "police get your hands up," "put the car in park," and "don't move." It goes on to say "Arnold recalled Mitchell not responding to commands and looking 'despondent.'

The video then shows a Jeffersontown police officer, Sarah King, pull up in front of Mitchell's car in her marked cruiser. She gets out of the car and runs towards Mitchell's car with her gun drawn. Arnold told investigators he instructed King to go back to her cruiser and block in Mitchell.

It's at this point the video shows King running back to her vehicle as Mitchell's car accelerates forward and Arnold fires shots.

"An officer thought he was going to flee and that is an improper use of deadly force," Simms said. "You cannot shoot someone because they're attempting to flee.”

In the PIU file, Arnold and another LMPD officer involved in the incident, Det. Daniel Mason, both told investigators during their internal interviews, that as King was running back to her cruiser, they saw Mitchell "reach down with his right hand."

"I could see his right leg shift from the brake pedal to the accelerator. And I could hear the engine start to rev. And at that very moment I knew I was in imminent danger of bein' pinned against my vehicle. And that the, uh, female officer was in imminent danger of being pinned against her vehicle because he started to accelerate," Arnold told investigators.

That's when Arnold said Mitchell's car accelerated forward, and "actually pushed" him back, when he pulled the trigger and fired several shots.

Simms and Friedman said the video appears to show a different story.

Simms said they believe Arnold fired shots before Mitchell ever moved his car, or it happened at the same time. Simms said if Arnold fired shots after Mitchell accelerated forward, the gunshots would have gone through his side or back. The autopsy lists six gunshot wounds to his head, neck, torso and upper extremities.

"Either way that’s a big problem because if he shoots before the car moves, that's objectively an improper use of deadly force and, arguably, criminal homicide," Simms said. "If the vehicle starts to move and then the shot is at the same time, then what you're looking at is a situation that is not what Bryan Arnold said, that Sarah King is in the path and that he had to use deadly force to stop this situation.”

The day after the shooting in 2019, during LMPD's press conference, LMPD said Arnold fired his weapon because Mitchell's actions endangered the lives of officers.

"As these officers surrounded Mitchell’s vehicle and attempted to take him into custody, Mitchell accelerated, striking Officer Bryan Arnold and endangering three other officers on foot, before ramming a Jeffersontown patrol vehicle," Crowell said.

Arnold told investigators he ultimately fired shots because he thought he "was gonna die" and that Jeffersontown Officer King would also have been run over or killed.

In her interview with investigators, King said while her back was turned, she heard shots fired and then turned to see Mitchell's car coming at her.

Officers said they believed Mitchell was armed at the time, but a weapon wasn't found with him. Of the four officers responding, Arnold was the only one to fire shots.

"If there's actually a clear threat to another officers life, you expect more than one officer to start shooting," Simms said. "It's because they didn’t perceive that threat because the shot happens before the vehicle starts moving.”

Simms also points to a section of Arnold's PIU interview where he states Mitchell "looked at me and made eye contact. He then looked back down again...at that moment I knew that it was gonna go bad and I was in a bad situation where I could get hurt or killed."

"That is the heart and soul and problem of this case," Simms said.

"That to me is a huge red flag," Friedman said. "That indicates a connotation or a decision making process in the mind of this officer that things were going to go bad before they ever went bad.”

The attorneys said there is also a key witness to the shooting that police never talked to. Mitchell had earbuds in while officers had stopped his vehicle, police reports say.  According to Simms and Friedman, he was on the phone with a man named Brandon, who describes what he heard. The attorneys said Brandon claims to have heard shots in the background, then Mitchell verbalize he had been shot, before hearing a car engine revving.

Arnold was placed on administrative leave at the time but no disciplinary action was taken at the close of the internal investigation.  Officer Arnold is back to full duties in the department's Air Patrol Unit.

"From the top down this was an immediate decision to say we are going to exonerate this officer and that's what they did," Simms said.

Simms and Friedman said their goal with the case is to continue with the wrongful death suit and find justice for Mitchell's family.

"These are disturbing issues," Friedman said. "And if anything good can come out of Mr. Mitchell's death it would be further transparency. It would be the family gets the truth of what occurred and would hopefully be incremental change in our system and how we go about policing.”

We've reached out to LMPD about the case and they do not comment on pending litigation.