"We need to move forward. We have a lot of discussion that needs to take place on our campus." 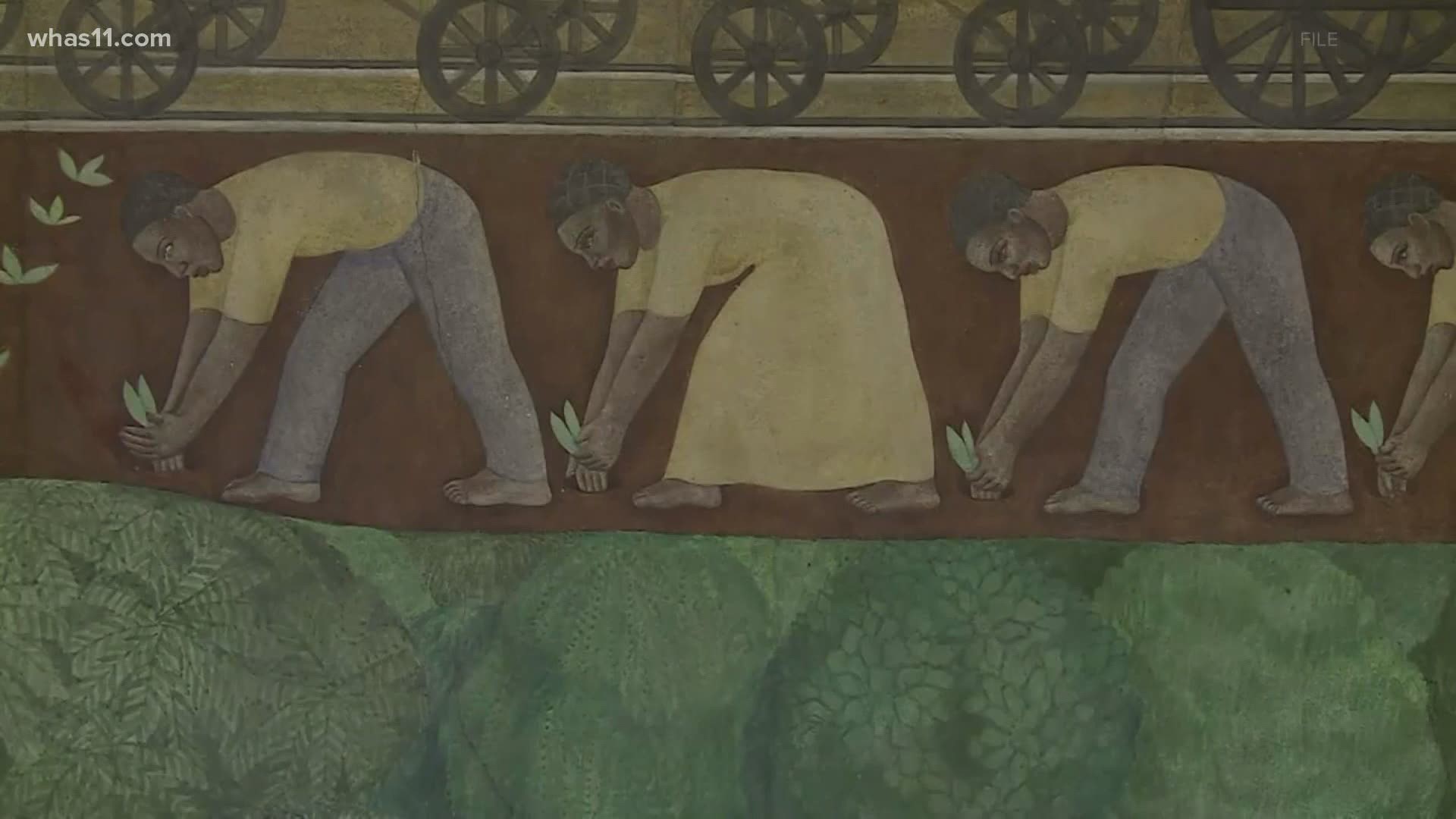 LEXINGTON, Ky. — Friday, University of Kentucky President notifies students, staff and faculty that a controversial mural on campus will be removed. President Eli Capilouto acknowledges in his message that the images of watching George Floyd die played a part in the decision.

Capilouto says the mural “carries with it tremendous symbolic weight.” The mural has been covered since a protest and hunger strike last year. He also said the mural makes it difficult to address important matters.

The 1930s fresco mural by Ann Rice O’Hanlon shows the history of Lexington in a series of scenes, including black men and women planting tobacco and a Native American man holding a tomahawk.

"I have not been able to get the images out of my mind. And the images should be — and will be forever — in my mind. For eight minutes and 46 seconds, on a street in an American city in 2020, George Floyd was suffocated to death — a knee at his neck, gasps escaping from his mouth, as he pleaded for his life and for his mother. I can’t adequately articulate the horror and disturbing nature of those images to me. I don’t have words to capture the mix of emotions — of anger and sadness, disbelief and nagging recognition that we have been here before — that have gnawed at me for days. But I also know that I can’t begin to feel how a black man or woman or the parent of a black child processes those images, either. To every issue, we bring our curated experiences — funneled through the prism of our mind’s eye — to an incident like this one or, for that matter, to a work of music, writing or art.

Those sounds, images and narratives are necessarily interpreted with the context of a given moment by generations of people over the passage of time. The simple truth is I can’t walk in their shoes. I can’t be in their skin. And I can’t understand what intergenerational subjugation does to families who are its victims. But I can try for greater understanding, a deeper sense of empathy and renewed resolve to contribute to healing, to do justice and to find reconciliation. As much as racism is a systemic stain on our country, so too, are we the inheritors of Dr. King’s admonition that the moral arc of the universe ultimately bends toward justice.

That is where I believe we find ourselves as a campus community today. We have not been immune from racial prejudice and hate, but I believe deeply that there is a commitment to doing better tomorrow than we are doing today. It’s against that imperfect and human backdrop that I am directing our facilities team to immediately begin the process of removing the mural in Memorial Hall. Why now? And what does this move accomplish? Just as certain images haunt me, I also cannot escape certain conversations that, over years, remain fresh. To many, the mural represents the work of a renowned artist, seeking in her time, to represent the evolution, however halting, of her native state. And as with all art, we seek to understand the intent of the artist and bring our own meaning and interpretation to it. I remember a conversation at Maxwell Place with 24 African American students in the fall of 2015. There, they detailed a list of recommendations that included “racist mural in Memorial Hall.” There was a conversation with one student about the mural who stopped me cold with the observation that every time he walked into a class in Memorial Hall, he was forced to reckon with the fact that his forbears were enslaved. They were chattel; brutalized as disposable property, even though in their time, they were regarded as essential to the economy’s progress. The art, to this student, sought to glorify and sanitize that fact. And he was speaking for many others, over many years, a point made clear again to me recently as we began conversations with our student leaders on how to move forward during this fraught time. The mural once again was a symbol, not of a state’s evolution, but of our unwillingness to recognize their experiences as members of our community. Memorial Hall of course, has its own important story — the story of the UK students and Kentuckians who laid down their lives during the Great War. It is a building constructed in honor of all Kentuckians — African Americans, Native Americans, and women alike — who gave their lives to preserve liberty.

How do we reconcile those images as perceived now with that narrative? To be sure, we have discussed the mural for many years and made a number of important, productive efforts to seek common ground and lasting solutions. But the spaces we have created for dialogue, and the work we have commissioned to expand conversation and contextualize art, haven’t worked, frankly. Our efforts and solutions with the mural, for many of our students, have been a roadblock to reconciliation, rather than a path toward healing. That’s not a criticism. It is a statement of fact and, I hope, understanding.

We need to move forward. We have a lot of discussion that needs to take place on our campus. And those discussions cannot obviate the necessity of thoughtful, but decisive, action on a number of fronts. I don’t believe we can have that conversation with the mural still, metaphorically, on the table. And, so while in the context of many significant issues we must discuss and decide upon, the mural may appear relatively small, it carries with it tremendous symbolic weight.

I want to remove that weight from the discussions we must have, so that we can act, together, as a community. As we determine how we can move forward with removing the mural, I will communicate with the campus."

RELATED: The King Louis XVI statue in Louisville was vandalized by protesters, here are some facts about the statue