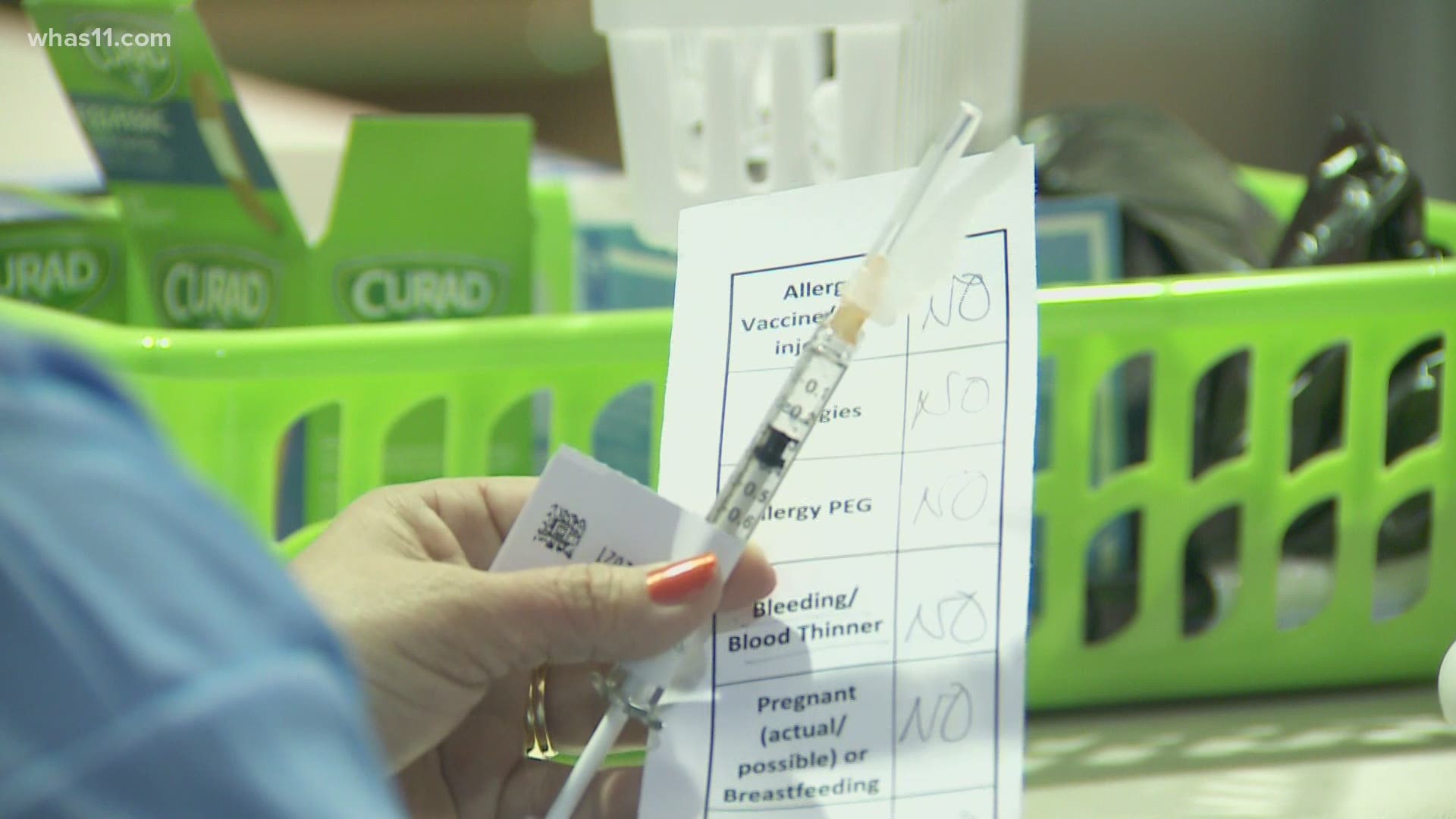 LOUISVILLE, Ky. — This is a weekly blog with daily updates on COVID-19 numbers, COVID vaccine and other related content across Kentucky for the week of April 12, 2021.

Additionally, Beshear's office said that four historical deaths from the state's audit have updated on the COVID-19 dashboard.

Kentucky has confirmed an additional 599 cases of COVID-19, according to Gov. Andy Beshear's office.

Jefferson County also has 103 new cases included in that total.

There were three coronavirus-related deaths reported. Officials said there were also ten deaths counted from the audit.

About 413 people are hospitalized, 105 in intensive care and 45 are on a ventilator..

“Today’s report shows why it’s so important for every Kentuckian to get their shot of hope and help us meet the 2.5 million vaccine Team Kentucky Vaccination Challenge,” Beshear said. “We have come so far in this fight, but it isn’t over. There are more than half a million Moderna and Pfizer COVID-19 vaccines available in Kentucky right now, and it just takes a few minutes to find yours.”

Governor Beshear confirmed 834 new cases of COVID-19 and 17 more deaths. He said the positivity rate is slowly creeping back up; it is currently 3.45%.

Beshear said the rising positivity rate is a warning that a "fourth wave is possible" in Kentucky. He said it is preventable with vaccinations.

So far, 1,622,924 Kentuckians have received at least the first dose of the COVID-19 vaccine. The governor urged Kentuckians to sign up for vaccine appointments, saying thousands are available across the state.

Amy Cubbage, the governor's general counsel, gave an update on Kentucky's unemployment system after it was shut down for four days to prevent fraud. The unemployment system is back open and letters have been sent to claimants with new PIN numbers and instructions on how to re-register their account.

Those who need help with their PIN or registering an account may call the new helpline at 502-564-2900. Employees will not be able to assist with processing claims at this number.

A new online portal has been set up at https://uiclaimsportal.ky.gov/s/. Cubbage instructed claimants to only use this portal and not to use any websites they may have saved on their devices.

“While not a drastic change, today’s increase in the positivity rate is concerning,” said Gov. Beshear. “

Top counties with the most positive cases today are: Jefferson, Fayette, Warren and Christian. Each county reported at least 30 new cases, according to Kentucky health officials.

The governor said 799 additional positive cases were confirmed and 4 deaths – including one from the death audit.

There are 405 currently hospitalized, 96 in intensive care and 53 on a ventilator.

Top counties with the most positive cases today are: Jefferson, Fayette, Warren and Kenton. Each county reported at least 30 new cases.

Kentucky is one of many states that are temporarily pausing the rollout of the Johnson & Johnson vaccine.

The news comes as the FDA and the CDC said extremely rare cases of blood clotting developed in six Americans who received the vaccine. So far 6.8 million Americans have received the Johnson & Johnson vaccine

“Everyone should still get one of the other two COVID-19 vaccines during this pause. We cannot let this slow us down. The United States is going to get about 1.85 million more doses of Pfizer and Moderna vaccines this week. We should be able to make up any loss of appointments,” Gov. Beshear said. “Stay calm – it looks like the risk here from the J&J vaccine is very, very small versus the really significant risk of being harmed by COVID.”

Louisville Metro officials said the city has seen an increase in COVID-19 cases from the last week, reporting that more B.1.1.7, or UK, variants are appearing throughout the county.

Additionally, the first case of the P.1, or Brazilian, variant has been confirmed in Louisville.

Chief Health Strategist Dr. Sarah Moyer and UofL Health officials said the variants are of concern, however the vaccines have been shown to be effective against both the UK and Brazilian variant.

“Doubling down on the protective measures of mask wearing, hand washing and social distancing, as well as getting vaccinated are going to be the way we fight these variants off,” said Dr. Mark Burns, an infectious disease specialist with UofL Health.

Officials also spoke at length about the pause of Johnson & Johnson vaccinations, saying those who have been vaccination should not be too worried and "still made the right choice."

Jefferson County had 51 cases in the new count.

The positivity rate crept up a bit to 3.16% -- the highest it has been in a month, Beshear said. He says health officials are keeping an eye on it.

Seven coronavirus-related deaths were reported from an audit. Many of the deaths, Beshear said, happened in early February and are now being reported. Two of them were from Jefferson County.

The state is continuing to set the trend in getting its citizens vaccinated. Beshear announced the vaccination challenge, a goal in getting 2.5 million vaccinated so restrictions can be eased statewide.

Where are we on the road to 2.5 million?

Gov. Beshear said about 1.6 million Kentuckians have been vaccinated so far but the number could higher. He says the system is lagging two to three days behind because of security upgrade.

The governor believes we should be about 900,000 vaccinations from the goal.

73% of those 70-years-old or older received their vaccines compared to 61% of those in the 60 to 69-year-old demographic.

56% of women compared to 44% of men have been vaccinated.

Since receiving the one-dose Johnson & Johnson vaccine on April 5, Brown said about 68% of the total inmate population were vaccinated a week after getting them.

"That was very deliberate. Because we didn't want to have to be in a situation of having to go back an do second doses on what might be a transit population," he said.

He said they could reach 70% soon as ongoing vaccinations clinics at the Kentucky State Penitentiary in Eddyville and the Blackburn Correctional Complex in Lexington.

The largest mass site opened Monday morning at UofL Cardinal Stadium.  Gov. Beshear attended the opening and announced the "Team Kentucky Vaccination Challenge." The goal of the challenge is to reward the state's vaccination efforts by removing COVID-19 restrictions.

The first goal of the challenge is to give out 2.5 million first doses of the COVID-19 vaccine in Kentucky.

If you lost a loved one due to COVID-19 after January 20, 2020, you are eligible to receive assistance from FEMA. Here is what you need to know when you apply:

FEMA also recommends having a copy of the death certificate and funeral expenses documents.