This also marks the highest week ever since tracking the virus began in March. 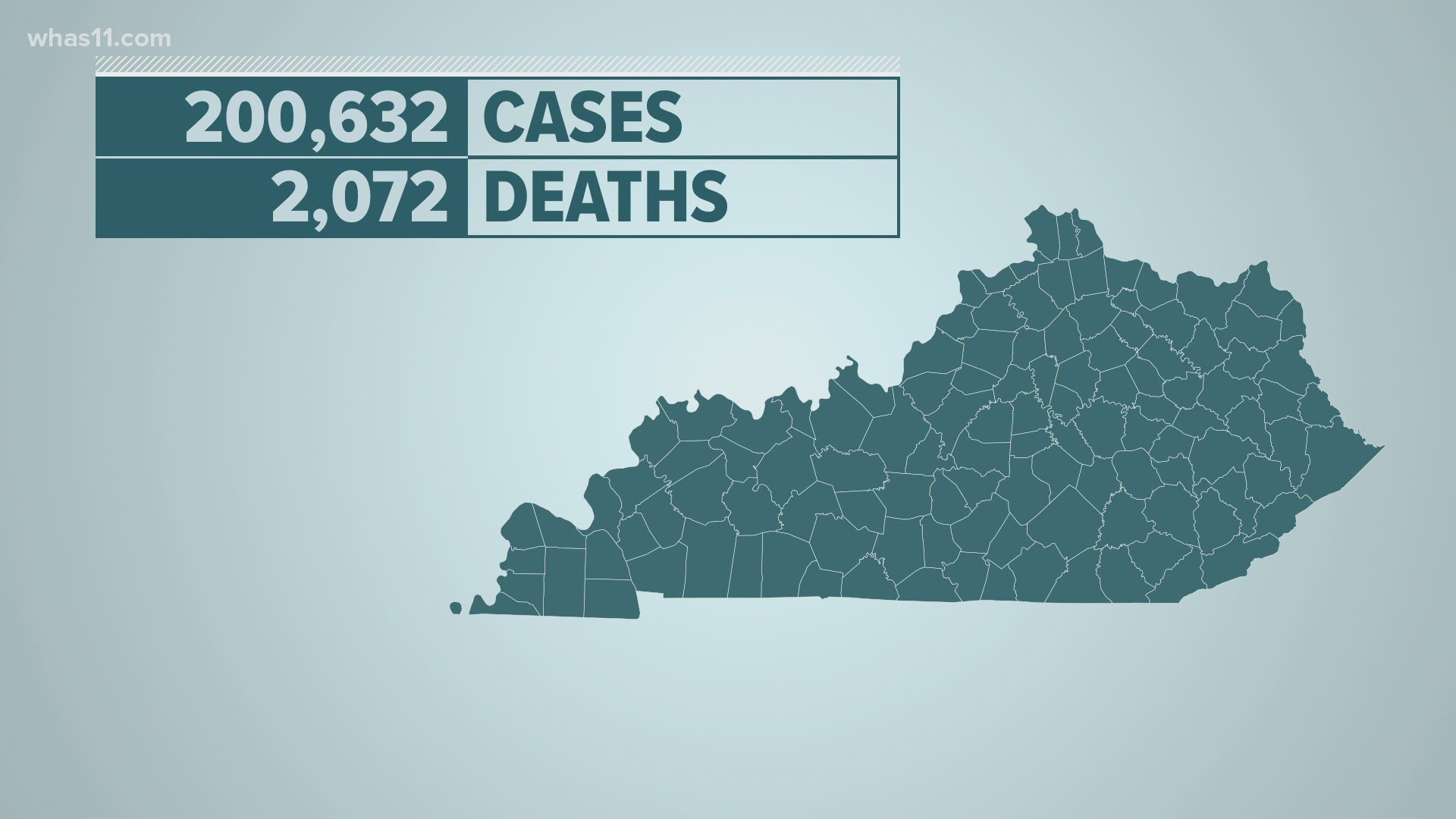 KENTUCKY, USA — This is a daily blog with daily updates on COVID-19 numbers and other related content in Kentucky for the week of November 30, 2020.

The governor believes some good news lies in the data – he says the rate of growth does appear to be slowing.

“In other words, our increase from the last couple of weeks is less than what we have been seeing. Certainly, our hope is that we are slowing down this train and are moving at least to a new plateau,” the Governor said. “We’ll have to watch in the coming week if we do have that Thanksgiving surge or if the majority of our families kept it small this year. So even on a tough day, possibly some good news,” Beshear said.

Ten new deaths, including two women ages 69 and 71 from Jefferson County, were also confirmed. That total now stands at 2,072.

The positivity rate dropped back a bit to 9.75%.

Due to limited reporting on Sundays, additional information including those who have recovered from the virus will be reported on Monday.

Kentucky is on track for its highest ever week of COVID-19 cases with an additional 3,892 cases reported on Saturday.

The state is in the middle of a third surge of virus cases and Gov. Andy Beshear is encouraging people to do what it takes to beat it.

Jefferson County also reported an additional 594 cases and was among several other counties with the most positive cases.

Twenty-three more deaths were also confirmed which included two men, ages 72 and 74, from Jefferson County and a 38 and 41-year-old woman from Hardin County. Kentucky has lost a total of 2,062 from the virus.

An estimated 1,731 people across the Commonwealth are hospitalized with 401 in ICU and 226 on a ventilator.

Kentucky has reported 198,065 cases since tracking began in March.

Governor Beshear's office reporting 3,614 new cases of coronavirus and 25 additional deaths. The total number of cases for the commonwealth is 194,193 as of today; also 2,039 Kentuckians have died from virus-related complications.

According to Beshear, the top counties with the most positive cases today are: Jefferson, Fayette, Boone, Kenton, Warren and Daviess. Each of these counties reported 100 or more new cases; Jefferson County alone reported 576.

Governor Andy Beshear announced 113 Kentucky counties are now in the COVID-19 red zone and there are 3,895 new COVID-19 cases in the state.

The state's test positivity rate is up to 10.07%. The governor said Kentucky is "getting close to qualifying for our own travel advisory."

Thirty-four more deaths were reported, bringing the total to more than 2,000.

Beshear also announced he had extended the state’s face coverings mandate for an additional 30 days. He said if Kentuckians continue to do their part and comply with the guidelines "we can save lives."

With numbers surging across the country in Kentucky, Beshear said it is "more important now than ever to protect those around us."

The governor announced the state has decided on 11 Kentucky hospitals where the first distribution of the Pfizer vaccine will be allocated. All of the locations are capable of storing the vaccines at the low temperatures required. He expects the state to start vaccinations as early as December 15.

Thirty-seven more deaths were reported which is the highest number of deaths reported for the second day in a row. The previous record was 35, reported yesterday.

State Health Commissioner Dr. Steven Stack said the "nation is facing an alarming escalation of cases" and there is reason to believe gatherings over Thanksgiving across the country caused more spread of the virus which will overwhelm healthcare systems in the country.

The latest report from the White House says the COVDI-19 risk to all Americans is at a historic high and fatalities from the virus have more than doubled.

"We are in a very dangerous place due to the current, extremely high COVID baseline and limited hospital capacity; a further post-Thanksgiving surge will compromise COVID patient care, as well as medical care overall...New orders put in place by the Governor should result in a rapid decrease in transmission if compliance is high," The White House said.

Kentucky confirmed 4,151 new cases of COVID-19. This is the highest number of new cases ever reported in the state. The overall total of COVID-19 cases in Kentucky is up to 183,168.

"Exponential growth catches up to us really fast," Governor Beshear said during a daily briefing.

Of those new cases, the governor said 461 of those are kids under 18.

Beshear reported record numbers of COVID-19 patients in the hospital, ICU and on ventilators. There are currently 1,777 patients hospitalized, 441 in intensive care and 241 on ventilators.

The governor also reported 35 more deaths, which is the state's highest daily number of deaths ever reported.

The record numbers reported today could, in part, be due to labs reopening following the Thanksgiving holiday and fewer labs being open on the weekend.

"COVID is spreading like wildfire," Beshear said."That's why we are fighting back and being aggressive, trying to not let it overwhelm us."

The governor announced two more surge testing sites have opened in Louisville and Lexington. To find a testing site near you, visit kycovid19.ky.gov.

The Food and Beverage Relief Fund, which is aimed at helping local bars and restaurants facing financial challenges due to COVID-19, opened to applicants yesterday and the governor said $1.7 million of the total $40 million has been approved to go out. Businesses seeking to apply are encouraged to visit teamkyfbrf.ky.gov to find eligibility requirements and more.

The governor said the hope is that bars and restaurants in Kentucky will be able to open for indoor dining at some capacity by December 14.

"I'm beyond politics. The decisions I make are between bad and bad," Beshear said. "Most of those who criticize wish for inaction. Inaction is deadly."

The governor also said he is pushing the federal government for another round of CARES Act funding. He said if Congress doesn't act, Kentucky won't have funding for things such as additional relief for bars and restaurants, additional eviction relief and additional unemployment help.

"Without another round of CARES Act funding, we don't have any dollars for testing, for tracing, for all of the things you've got to do to stop this virus or to continue to give extra support to our local health departments," Beshear said.

Governor Andy Beshear is asking those who traveled and were a part of large gatherings over the Thanksgiving holiday to assume they were exposed to coronavirus, stay away from others and get tested. Health officials are expecting a surge in COVID-19 cases across the country following the holiday, but the governor said he hopes the recommendations for Kentucky will keep the case numbers lower in the state.

"Our goal is to vaccinate the most vulnerable parts of our population," Beshear said.

The governor said the first shipment of Moderna's COVID-19 vaccine is expected to arrive in mid-December and include 76,700 doses.

"We have a chance to beat this thing!" Beshear said.

RELATED: Side effects from COVID-19 vaccine likely will be unpleasant, doctors advise

There are currently 1,071 Kentuckians hospitalized with the virus, 421 in intensive care and 229 on ventilators.

Twelve more people have died. There have been a total of 1,908 deaths in Kentucky related to the virus.

Beshear reported two more veterans have died from COVID-19 at the Thomson-Hood Veterans Center in Wilmore, Ky. A total of 30 veterans at the center have now died, and there are currently two active cases at the facility.