Jefferson County reported 346 cases on Sunday. The state's positivity rate is at 10.24%. 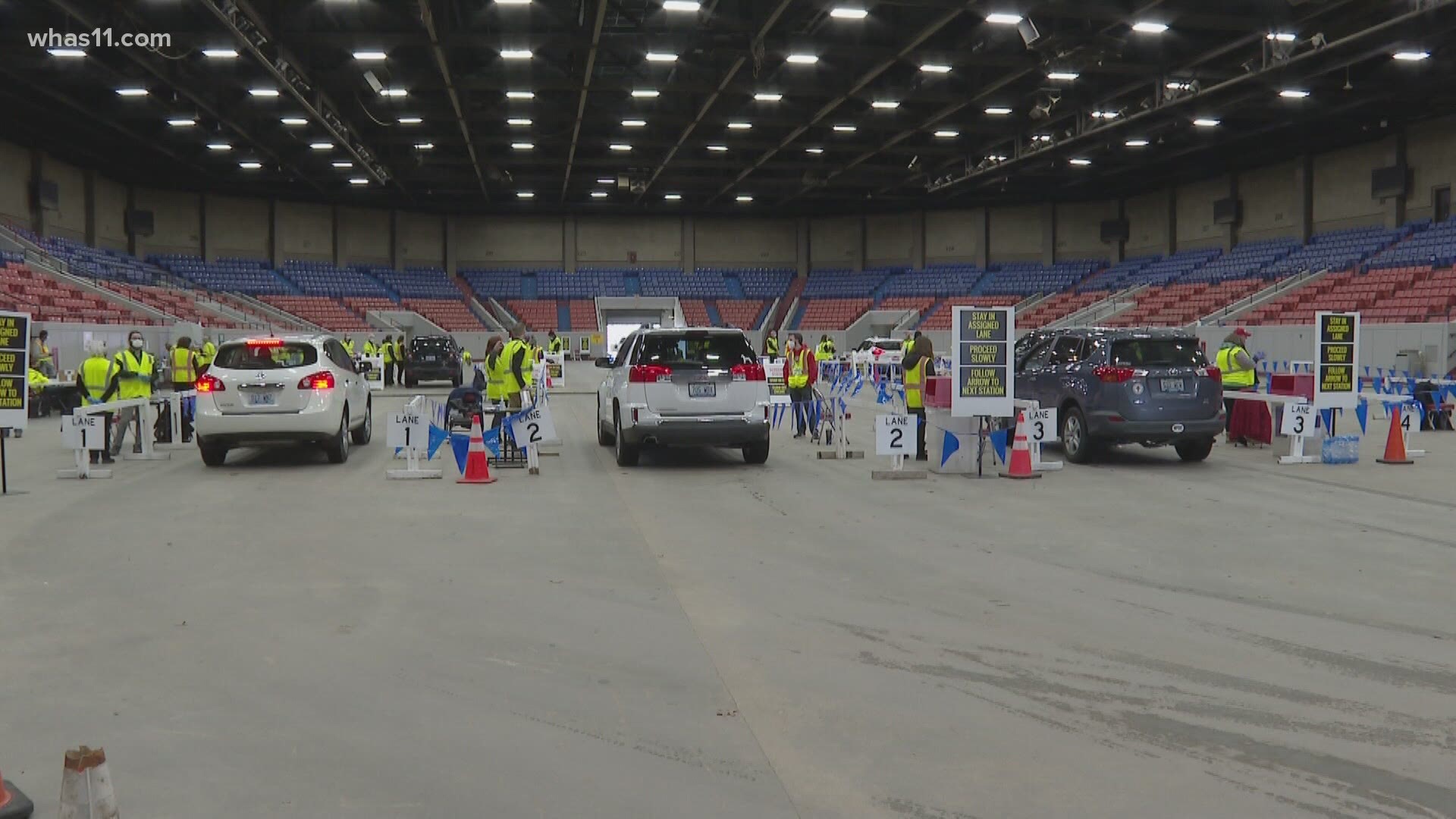 LOUISVILLE, Ky. — This is a weekly blog with daily updates on COVID-19 numbers and other related content in Kentucky for the week of January 18, 2021. Governor Andy Beshear is scheduled to give live updates on Monday, Tuesday and Thursday at 4 p.m.

The COVID-19 positivity rate continues to trend downward, according to state officials.

Their daily data report also shows 319 cases were found in those 18 years old and younger.

Thirty-five deaths were confirmed, bringing the total 3,421 Kentuckians who lost their lives to the virus.

Hospitalizations fell with 1,540 reported, 371 in intensive care and 218 on a ventilator.

For a second day in a row, Kentucky’s COVID-19 positivity rate continues its dip below 11% as the state reports 3,795 new positive cases Saturday.

Jefferson County also reported 603 cases included in the count and it brings their overall total to 62,933 cases countywide.

Officials reported 49 new deaths associated with the virus in the Commonwealth.

Gov. Beshear announced 2,756 new COVID-19 cases Friday, with Jefferson County reported 445 of the day's cases. There were also 36 deaths, bringing the statewide total to 3,337 Kentuckians lost to the virus.

The state's positivity currently rate sits at 10.8%, the lowest rate since Jan. 2.

"I see people wearing masks now more than ever and engaging in social distancing when they can. Keep it up," Beshear said. "We are going to beat this virus in 2021. We’ve just got to protect everyone until we get there."

There are 1,561 Kentuckians currently hospitalized with COVID-19, and 195 of them are on ventilators.

Governor Beshear announced 3,728 new cases of COVID-19 and 58 more deaths. The total number of Kentuckians lost to the virus is now 3,301.

On Friday, those who have died from the virus in Kentucky will be memorialized during a ceremony on Kentucky Capitol grounds. The governor said an American flag will be placed for each person lost.

The pandemic has increased the need for reliable internet with telehealth, virtual learning, remote work and more. Thursday, Lt. Governor Jacqueline Coleman discussed moving forward with the state's goal of providing reliable internet access to all Kentuckians. She announced the first step in the Kentucky Broadband Initiative will be a Wi-Fi speed test. All Kentuckians, regardless of location, are asked to participate in a quick, free, anonymous speed test which will help the state assess which areas they need to focus on. The test can be found online at ewdc.ky.gov/initiatives/pages/kbi.aspx .

The counties of Jefferson, Fayette, Kenton, Boone, Warren and Daviess are among those with the most positive cases, each reporting more than 120 new cases.

The governor said the state's test positivity rate has been below 12% for the fifth day in a row.

“While there is still so much pain and darkness in our commonwealth due to this pandemic, we are beginning to see the light ahead of us,” Gov. Beshear said in a release. “This plateauing positivity rate is great news for Kentucky, especially as we continue to bring more of these live-saving vaccines to our people each week.”

Beshear said this is the second lowest number seen on a Tuesday in two weeks.

Twenty-seven deaths were reported, bringing the total to 3,194.

Beshear also announced other numbers including hospitalizations. He says there are currently 1,633 patients with COVID-19 admitted, 442 in ICU and 208 on a ventilator.

The state is nearing 3.8 million Kentuckians that have been tested for the virus.

Dr. Steven Stack said that about 1,500 sites in the state want to open as a vaccine site but there's not enough to go around to each of them.

Dr. Stack said the state’s goal is to complete vaccinations for school personnel. So far, 10 school districts have given their staff their first dose. He also said it's been a problem getting shots to the 70 and over crowd; All skilled nursing facilities statewide and two-thirds of assisted living facilities have been offered their first shots from either Walgreens or CVS.

Gov. Beshear said he's requested double the amount of vaccines since the state has shown it could dispense them "efficiently."

An estimated 1,587 people are hospitalized, 397 in intensive care and 208 are on a ventilator.

Kentucky is following a phased approach to distributing the COVID-19 vaccine. Here is the current plan with an estimated timeline:

RELATED: Can you travel to another county to receive the vaccine in Kentuckiana?

Kroger is working with the state to set up vaccination clinics starting Feb. 1. Anyone in Phase 1 of Kentucky's vaccination plan will be able to receive the vaccine through Kroger. The company plans to release more information on these sites on Jan. 28.