This comes one day after the Kentucky Historic Properties Advisory Commission voted 11-1 in favor of removing it. 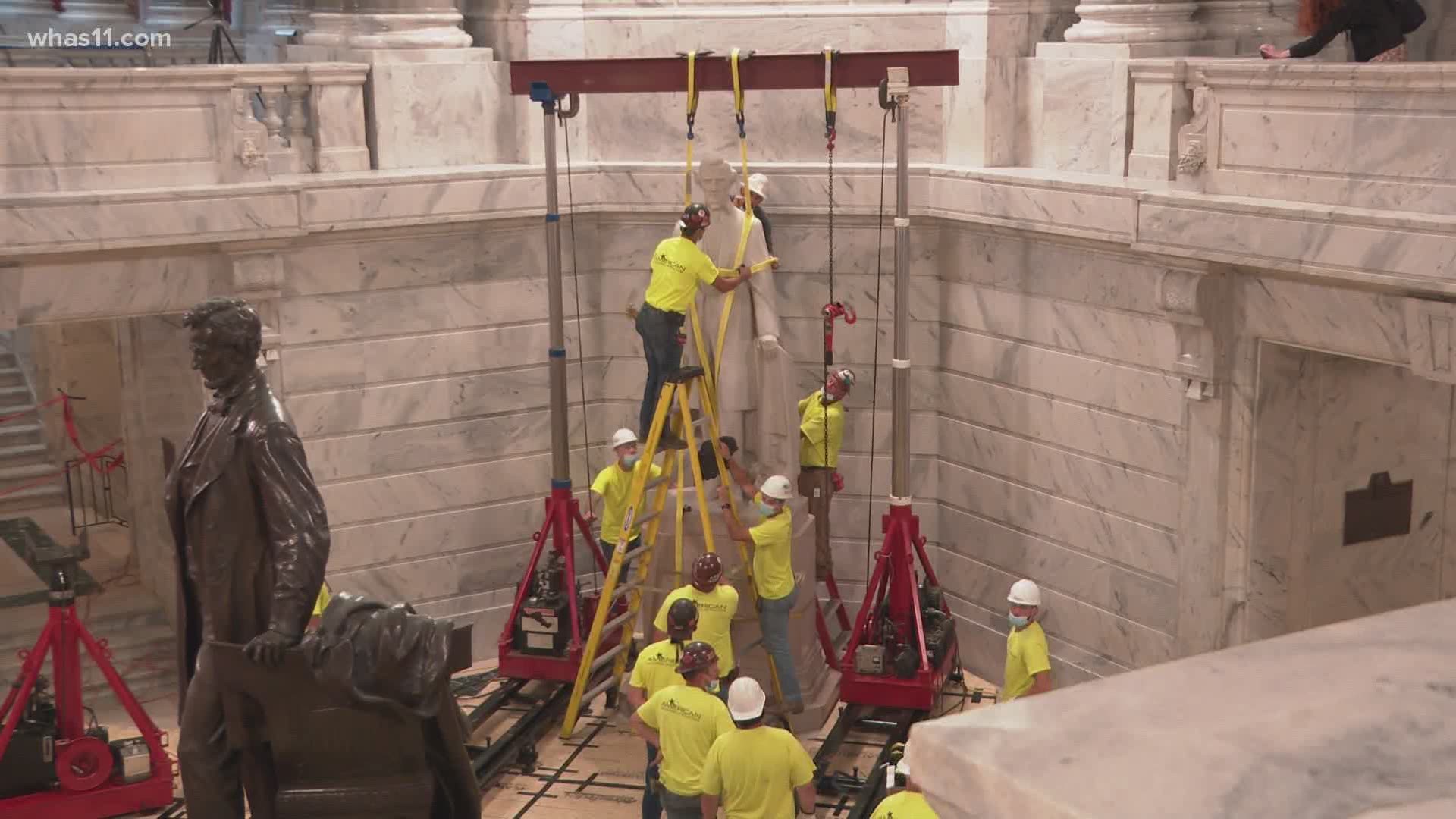 This comes one day after the Historic Properties Advisory Commission (HPAC) voted 11-1 in favor of removing it. Gov. Andy Beshear was there as crews worked on the removal process. The Governor ceremoniously pushed the button to a rig that lifted the marble statue off its pedestal in the Capitol Rotunda.

Once the statue was lifted off the pedestal, the crew put support beams around it to ensure that it would not tip over. The 12-foot marble statue of the lone Confederate President will be moved to Jefferson Davis State Park in Fairview.

Inside the base of the statue, two items were found: a newspaper from 1936 and a bottle of Glenmore Kentucky bourbon.

People got to the Capitol early Saturday morning to witness history in a move they say has been a long time coming.

“These statues were used as intimidation," Gerry Seavo James said. "They were used as a way to rewrite the story as the south, of this heritage not hate. But it was hate.”

James says now moving forward, he hopes everyone gets to decide whose statue goes up. He says it should represent the community and the people in it.

“The confederacy for me represents oppression of my ancestors and contributes to systemic racism, disenfranchisement,” James said.

But not everyone who was watching for the statue to come out of the doors agrees the Historic Properties Advisory Commission made the right decision to remove it.

“History should be distorted in my opinion,” Robert Houf said.

Houf says he believes the soldiers who fought for the confederate states should be honored.

Beshear has long been an advocate for the statue's removal. He tweeted about the removal, saying: "After calling for its removal and urging the Historic Properties Advisory Commission to act, today I pressed the button to bring it down. Now, every child who walks into their Capitol feels welcome. Today we took a step forward for the betterment of every single Kentuckian."

1 / 11
AP
Workers prepare to remove the Jefferson Davis statue from the Kentucky state Capitol in Frankfort, Ky., on Saturday, June 13, 2020. A Kentucky commission voted to take down a statue of Confederate President Jefferson Davis from the state Capitol. The panel supported a push from the governor as the country faces protests against police brutality following the deaths of African Americans in encounters with police. (Ryan C. Hermens/Lexington Herald-Leader via AP)

It is unclear at this time when the statue will officially be relocated.