Michael Sparks of Elizabethtown has been charged with unlawful entry, disorderly conduct and obstructing law enforcement. 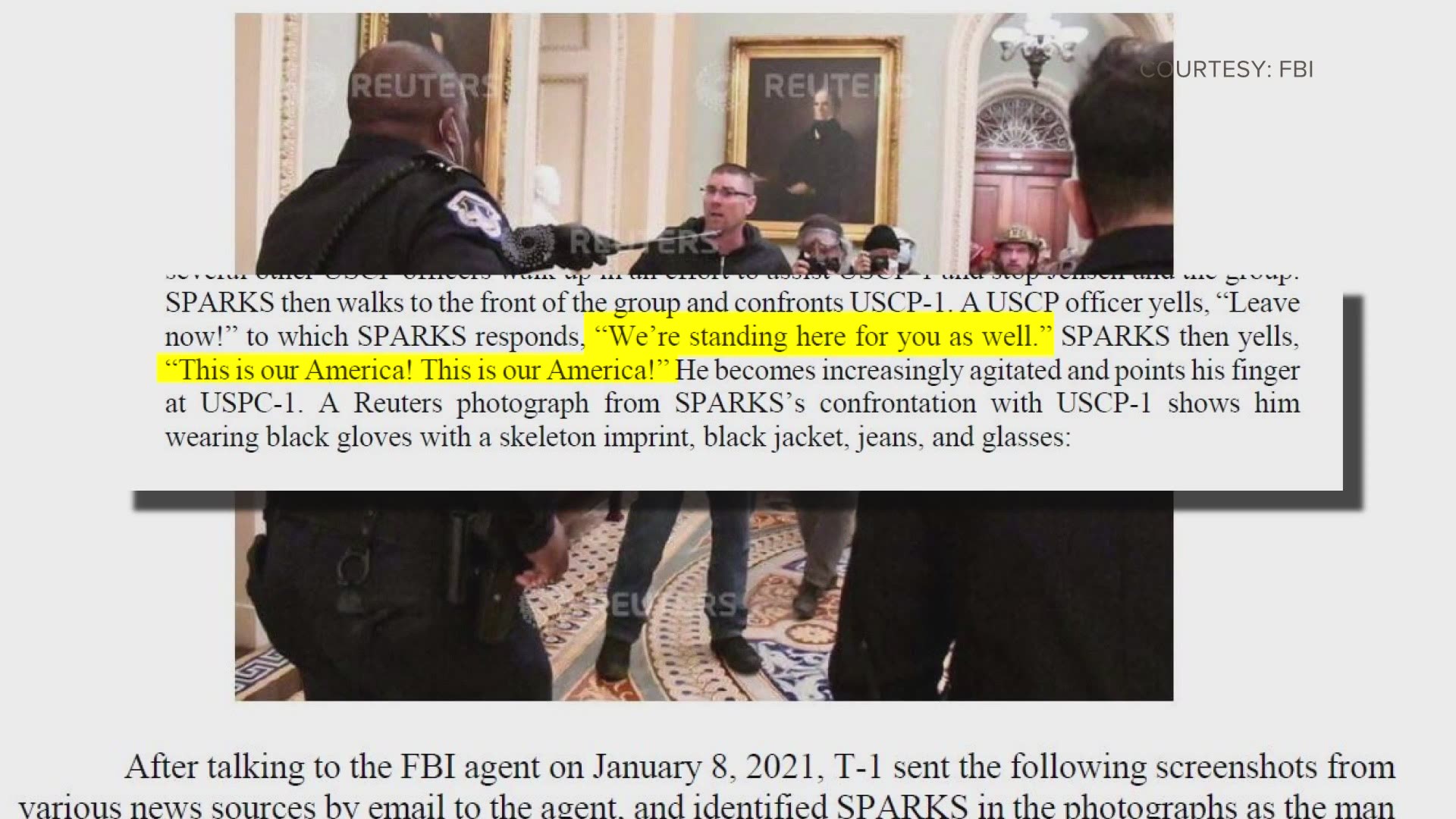 FRANKFORT, Ky. — Another Kentucky man has been charged in connection with the violent riot at the U.S. Capitol on Jan. 6, 2021.

According to an affidavit from the United States District Court, Michael Sparks of Elizabethtown, Ky. has been charged with unlawful entry, disorderly conduct and obstructing law enforcement.

According to FBI Louisville, Sparks was arrested on Tuesday.

The affidavit says an anonymous source and acquaintance of Sparks called the FBI's National Threat Operations Center and said Sparks was one of the first people to climb through a broken window into the Capitol building.

The person said they heard Sparks talk about attending a pro-Trump rally in Washington D.C. and allegedly said, "This time we are going to shut it down."

Law enforcement spoke to the source directly and the person was able to identify Sparks in a series of pictures and videos taken on the day of the riot. In one viral video, a Capitol officer is being chased through the halls of Congress. The video ends with a shouting match that the FBI said Sparks participated in.

The affidavit includes a series of screenshots of videos from various news sources and Capitol surveillance footage that Sparks allegedly appears in.

According to the affidavit, the FBI also received a photograph of Sparks inside the Capitol building from a second anonymous source.

A third source contacted the FBI following posts Sparks made on his Facebook page after Jan. 6. The affidavit includes screenshots of those posts, including one that says, "A new dawn is coming. Be ready. Just pray and trust in the Lord."

Another screenshot from Sparks' account says, "Just be ready for a lot of big events. Have radios for power loss etc."

The third source provided additional screenshots of social media posts where Sparks talks about traveling to D.C. for the pro-Trump rally.

Based on the evidence provided by the various sources, the FBI filed their complaint and obtained an arrest warrant for Sparks.

In a nearly 18 minute Facebook video from July, Sparks said he was trying to re-center in his faith after months of struggling with world events. Sparks blamed Facebook for spreading hate and likened Black Lives Matter to the Klu Klux Klan.

"We don't need an organization like that, I can tell you," Sparks said. "We don't need the KKK and we don't need Black Lives Matter we need Americans to stand together especially, especially the Christian church."

One person WHAS11 spoke to said it was surprising it took so long to charge Sparks since many in the community recognized him as soon as the Capitol video went viral.

Sparks is the fourth Kentucky resident so far to be charged with a federal crime related to the riot at the Capitol.

He is expected to appear in federal court on Wednesday.

The FBI is still investigating the matter and if anyone has information that may help, they are encouraged to submit it online.