Auditor Mike Harmon's office highlighted a total of seven major issues, including the use of the "Auto-Pay" feature which disbursed benefits. 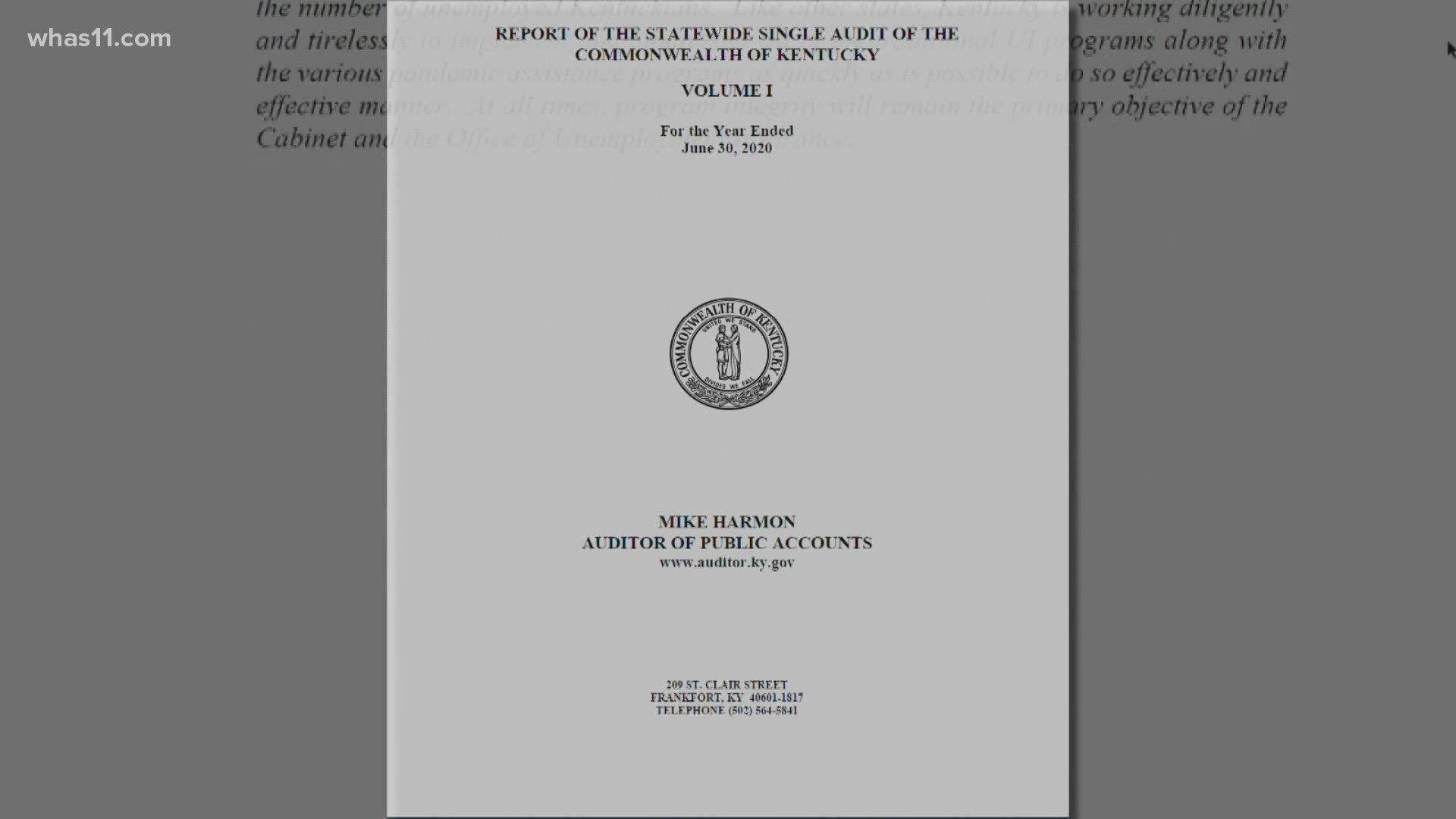 FRANKFORT, Ky. — Kentucky Auditor Mike Harmon released another comprehensive report which exposes more glaring problems in the state unemployment system. Harmon's office highlighted a total of seven major issues, including the Commonwealth's use of the "Auto-Pay" feature which disbursed benefits.

"The auto-pay created a lot of the problems," Harmon said.

The Statewide Single Audit of Kentucky report states that the Office of Unemployment Insurance, early in the pandemic, removed safeguards such as confirmation of unemployment and income, which Harmon's office believes violated federal law.

The office took a sampling of full-time state workers, who lost part-time jobs, but still received state unemployment benefits as well as the federal $600 per week.

"Sixteen of the 37 that we tested got it when really they shouldn't have," Harmon said.

On top of that, the report accuses state unemployment of ignoring 400,000 emails from claimants which remained unread until November.

"It just kind of breaks my heart that 400,000 emails were just archived without even opening them up and looking at it,” Harmon said.

The report also underscored improper handling of data breaches in the system, including the one our FOCUS team brought to the state's attention.

In response to the report, the Kentucky Labor Cabinet released this statement:

As the audit points out, there has been an unprecedented demand on the unemployment system with more than 1.6 million claims filed in less than a year. Most concerns noted in the auditor’s report were addressed in the spring, but no one in state government will be satisfied until all Kentuckians receive the unemployment benefits for which they qualify. Unfortunately, in the years leading up to the pandemic, the previous administration, and previous legislatures, closed in-person offices, sliced the UI budget by $16 million and cut 95 skilled employees from UI that were desperately needed. This, coupled with a once-in-a-lifetime pandemic and a 1,300% year-over-year increase in claims meant many Kentuckians have had to wait too long during a difficult time for their payments. The office, at the direction of Gov. Beshear, will continue to address any shortcomings in the system and work tirelessly to meet the needs of Kentucky workers who are unemployed due to no fault of their own.

This pandemic and ensuing economic fallout have resulted in a flood of more than 1.6 million unemployment insurance claims filed in Kentucky in less than a year, with the state paying out more than $5.6 billion in benefits since March, but it is unacceptable that some Kentuckians who filed months ago have not been paid and that thousands of emails went unopened.

To provide immediate relief, the Governor authorized $48 million in CARES Act funding last month for those who have waited too long to receive unemployment benefits and to help those who missed out on the federal government’s Lost Wages Assistance Program because they did not make enough. The Better Kentucky Budget he proposed to lawmakers also allocates $47.5 million to correct chronic underfunding of the unemployment insurance system after the administration inherited an operation running on an IT system that has been in operation since the 1970s. The Governor’s proposed budget includes General Fund spending of $1.1 million in fiscal year 2021 and $8.4 million in fiscal year 2022 to provide funding to restore employees to help with unemployment claims at the 12 career centers throughout the commonwealth.

You can read the full audit below: