Pitino claims he had no knowledge of Adidas' actions regarding a UofL recruit. 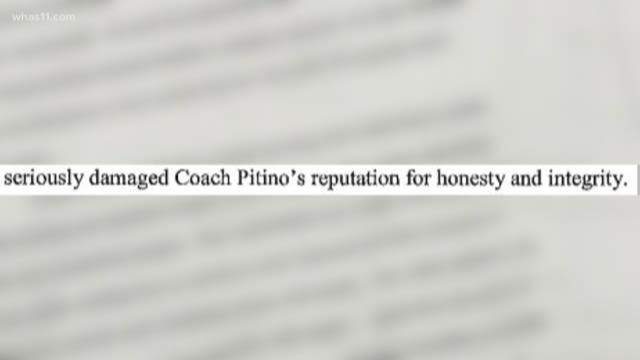 LOUISVILLE, Ky. (WHAS11) – The Adidas logo remains on the clothing of all athletes at the University of Louisville, but Interim President Dr. Greg Postel says the university will review its contract with Adidas.

Now, Rick Pitino is blaming Adidas for his troubles with the FBI. The former coach is now suing the very company that paid him a $1 million personal services contract until abruptly canceling it this week.

A 15-page federal lawsuit puts the blame on Pitino's firing on the actions of a few Adidas employees, who according to the lawsuit, "seriously damaged Coach Pitino's reputation for honesty and integrity."

"We are very confident that the coach engaged in no illegal activity or any irregular activity," Steve Pence, Pitino's lawyer, said.

The lawsuit doesn't specify a dollar amount, but Pence says it is about more than just money.

He filed the suit to make clear Pitino had 'nothing to do with Adidas' outrageous, wrongful and illegal conspiracy,' according to the lawsuit.

"They are going to have to own that and somehow make that right. How they go about doing that? We'll have to see," Pence said.

Adidas announced a 10-year, $160 million deal in August with the University of Louisville to supply and market apparel for all of the University's 23 sports programs. It was considered one of the largest investments in American sports to a single university.

In response to the lawsuit, an Adidas spokespersons says, "Mr. Pitino's lawsuit is clearly a reaction to his termination yesterday and is without merit."

The lawsuit doesn't include the University of Louisville.

Pitino Lawsuit Against Adidas on Scribd