Pitino’s attorney: Pitino was not aware nor involved in paying recruits or recruits’ family

Rick Pitino's attorney released a statement on Thursday saying Pitino was not aware nor involved in playing recruits or the family of recruits. 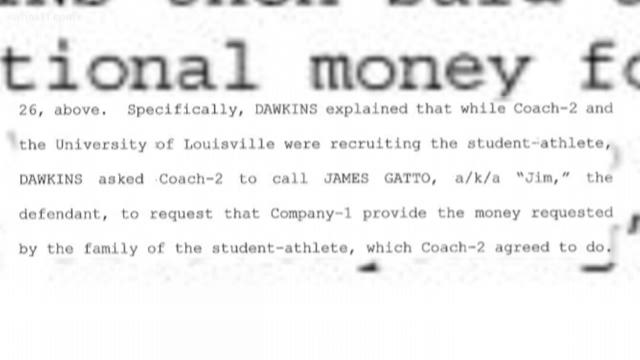 LOUISVILLE (WHAS11) – The attorney for Coach Rick Pitino says Pitino was not aware nor was he involved in any payment to recruits or the families of recruits.

This newest statement comes after the indictments of eight men in the FBI’s case of fraud and corruption in multiple college basketball programs, including the University of Louisville.

While additional information is said about Coach-2 in the original complaint made public September 26, there is a similar paragraph in the indictment. Both documents focus on claims made by Dawkins during a conversation in a Las Vegas Hotel Room in July, which federal investigators said happened after a meeting with an assistant coach from Louisville.

“Dawkins then said that he had spoken with and informed Coach-2 that “I need you to call Jim Gatto [the defendant,} who’s the head of everything at Company-1’s basketball program," the complaint said.

“Specifically Dawkins explained that the while Coach-2 and the University of Louisville were recruiting the student-athlete, Dawkins asked Coach-2 to call James Gatto a/k/a Jim the defendant to request that Company-1 provide the money requested by the family of the student-athlete, which Coach-2 agreed to do,” the indictment reads.

The reference to an agreement is the difference.

Pence issued the latest statement on Thursday. You can read it in full:

"Coach Pitino was not aware of, and did not participate in, any payment to any recruits or their families. The recent indictment returned in New York does not allege that Coach Pitino was aware of, nor that he participated in, any payment to any recruits or their families. Reports to the contrary are false, misleading and defamatory. The only mention of Coach Pitino in the indictment is a single statement by defendant Dawkins, who boasted that he had communicated with Coach Pitino about the scheme concocted by him and his co-conspirators. Dawkins made a similar boast about communications with a coach at the University of Miami. But these statements by Dawkins are wholly uncorroborated, inconsistent with other proof and, more importantly, false.

Had Dawkins communicated with Coach Pitino, the FBI wiretap and phone records would have captured the conversation. They didn't. All indications are that Dawkins's practice was to drop the name of a well-known coach to enhance his stature with his co-conspirators, in order to convince them to give him more money. The complaint and indictment bear this out.

Coact Pitino has fully cooperated with the government's investigation and will continue to do so. It is irresponsible for any entity to exaggerate or contort the facts to make it appear that Coach Pitino had any role in his conspiracy, whe in fact he did not. There simply is no legitimate interest served by any entity (government or otherwise) publicly smearing an individual when that individual has not been provided a forum in which to vindicate his rights.

This applied to al citizens, including Coach Pitino.

Coach Pitino stands by his previous statement: He has never allowed or known of any payments to any his recruits or their families during his entire college coaching career at Boston University, Providence, the University of Kentucky, and the University of Louisville."