Missouri timeshare exit scams: how to avoid them 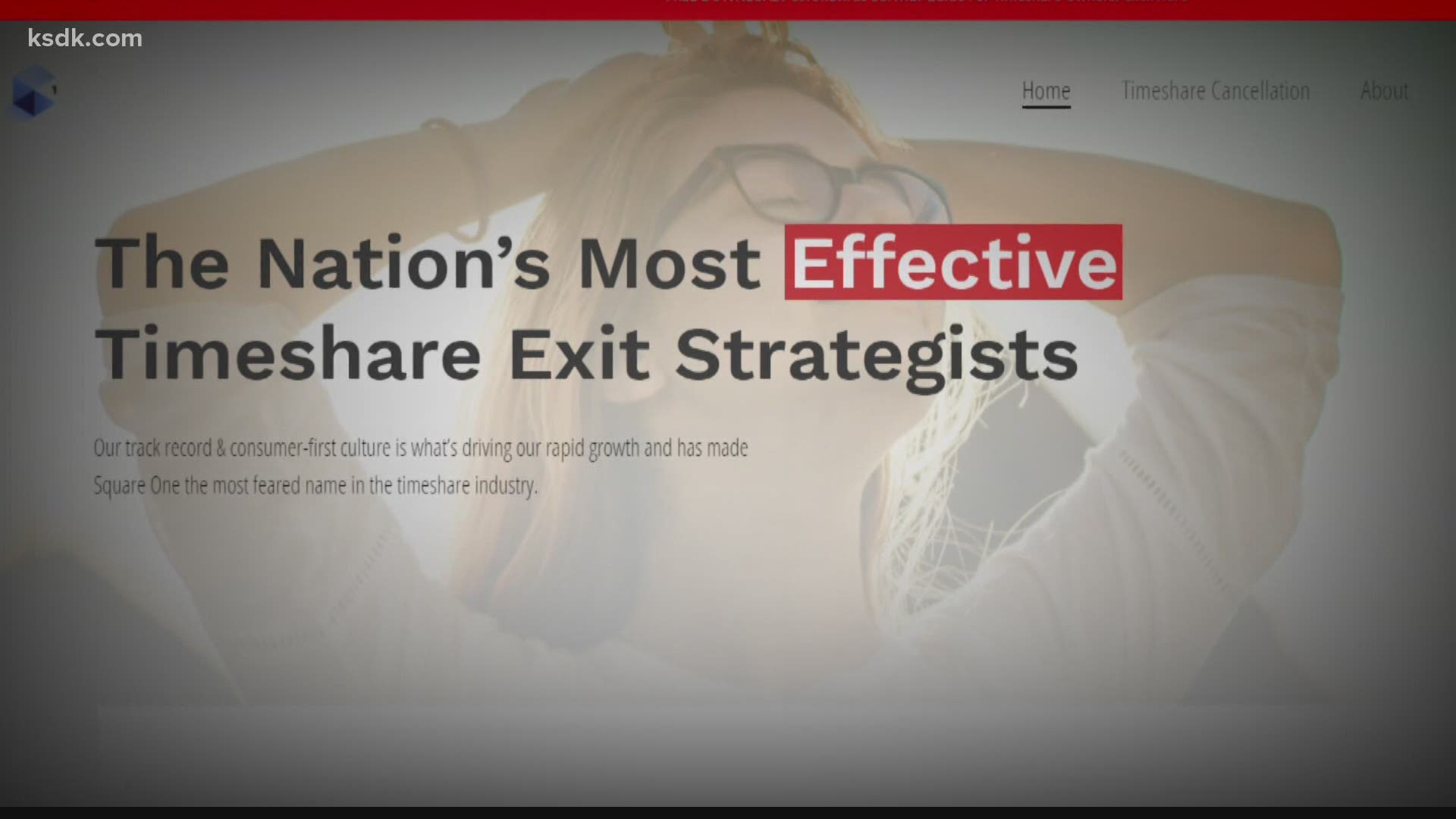 ST. LOUIS — It's an industry putting Missouri on the map for all the wrong reasons.

The Show Me state has become a hot spot for timeshare exit companies that have bilked millions from people all over the country.

The I-Team found out how to avoid these scams and how you may be able to get out of your timeshare without any help.

On each page, in every Scott family photo album, you'll find two of the very best things: family and vacations.

"Although at 84 now we don't travel as much as we did a few years ago," said Royce Scott of Chesterfield.

Royce and his wife Suzanne have owned timeshares around the country.
Their latest one is in Hilton Head, South Carolina. It's not getting as much use as it could.

"Families changed and children grew and interest waned. It got used less and less," said Scott.

So it was perfect timing last April when a flier in the mail invited the couple to a luncheon for a local timeshare exit company called Square One Development Group.

"Their conversation and presentation was impressive. We signed up with the square one development group to terminate the timeshare," said Scott.

In return, the company signed a contract promising to get Scott out of his timeshare within a year or give him his money back. A year came and went and the story changed.

"We heard nothing for months. Then I got a response telling me all the reasons why I should continue and all the reasons they weren't going to refund my money," said Scott.

He had become the timeshare company's latest victim.

"We have more than three dozen complaints about this company from consumers all across America who tell us that they're losing thousands of dollars. We have more than $300,000 in claim losses to this group," said Don O'Brien with the Better Business Bureau.

One of the reasons Scott decided to sign on with the company was because Square One claimed to be accredited with the Better Business Bureau. Scott said Square One even had a BBB logo and A+ rating on their website.

"That was a trap," said Scott. The business was never BBB accredited.

"In this case that business did stop using the logo. After we asked them to stop using it in their presentations," said O'Brien.

People from around the country have filed more than 30 complaints about Square One Development since June 2019. Consumers reported to BBB they incurred more than $350,000 in losses.

Missouri has also become a hot spot for timeshare exit companies. The BBB has gotten more than a thousand complaints about Missouri based timeshare companies scamming people like Scott out of a collective $2.2 Million dollars.

If you're stuck in a timeshare, O'Brien says there may be a more direct option for you to get out of it.

"A lot of the major resorts now have what are called Deed Back programs which they will take that deed back from you," said O'Brien. "If you still owe thousands of dollars on the mortgage in the first place with that company, they're not going to take that back from you. But if you're all paid up, if your maintenance fees are good, especially if you've been a customer of theirs for a long time they're more than likely going to work with you and try to give you an out rather than having one of these third party companies try to do the job for you."

"We just did that with our time share," said Scott. He's free of his timeshare. But he's still out $9,000. Scott says he's contacted the Missouri Attorney General, and his credit card company. If he can't get his money back, he says his last resort will be small claims court.

One of his biggest takeaways from the whole experience?

"If you do something like this, put it on your credit card. Then you have the additional support of the company that owns the credit card to help you resolve that as a potential fraud issue," said Scott.

BBB offers these tips on how to exit a timeshare holding: