PLAYING ON FIRE: What Champions Park is made of

The soccer fields at Champions Park became torn up after a rainy weekend and the Bourbon & Beyond festival. The muddy mess left behind concerns of if dangerous compounds were brought to the surface of the property that used to be a landfill. 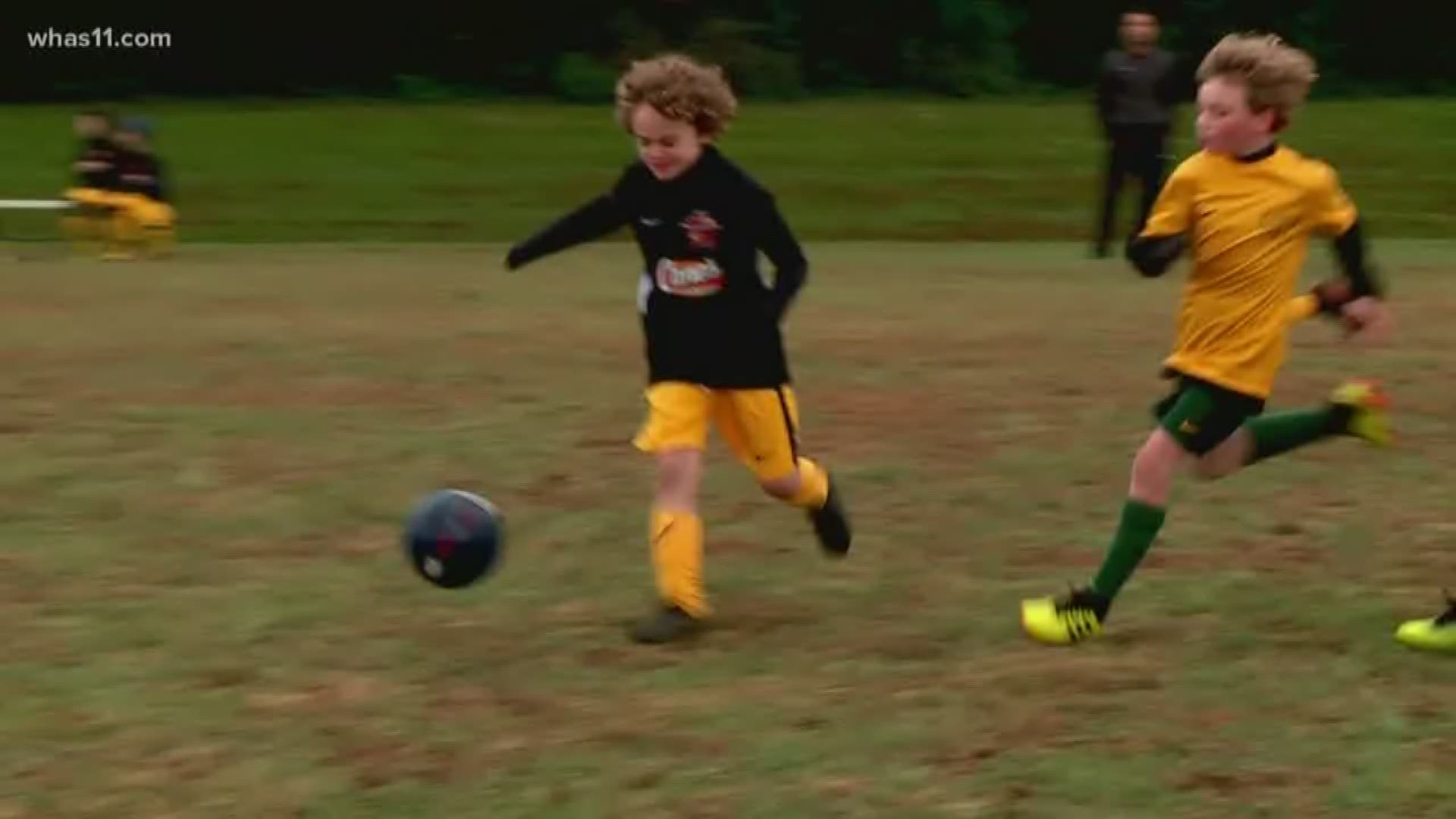 But for the "Kentucky Amateur Soccer League," no team has been the home team as their regular field, Champions Park is currently being fixed.

“The kids have adjusted to it,” John Haworth, a soccer dad, said.

They've been playing “away," at the Oldham Soccer Club since late September.

“We are supposed to play at Champions Park,” Mary Louise Pozaric, a soccer mom, said.

The soccer fields at Champions Park became torn up after a rainy weekend during the Bourbon & Beyond festival.

“The parking was our biggest issue down there,” John Haworth, a soccer dad, said.

Signs on the field say ‘no parking’ but the festival producers sold camping and RV packages and parked cars on top of the landfill.

“I actually went to Bourbon & Beyond,” Mary Louise Pozaric, a soccer mom, said. “I had mud covered up all on my boots.”

Champions Park was scheduled to host Bourbon & Beyond on Sept. 22 and 23 with another music festival, Louder Than Life, to happen the following weekend. That weekend there was record-setting rainfall.

As it poured during Bourbon & Beyond, the bands played only on day one.

And by day two the rain did not let up. That day Bourbon & Beyond was canceled and the area was declared not safe for the public.

Campers had to pack up and go. The issue quickly became that they couldn’t move, as the ground had turned to a muddy mess. 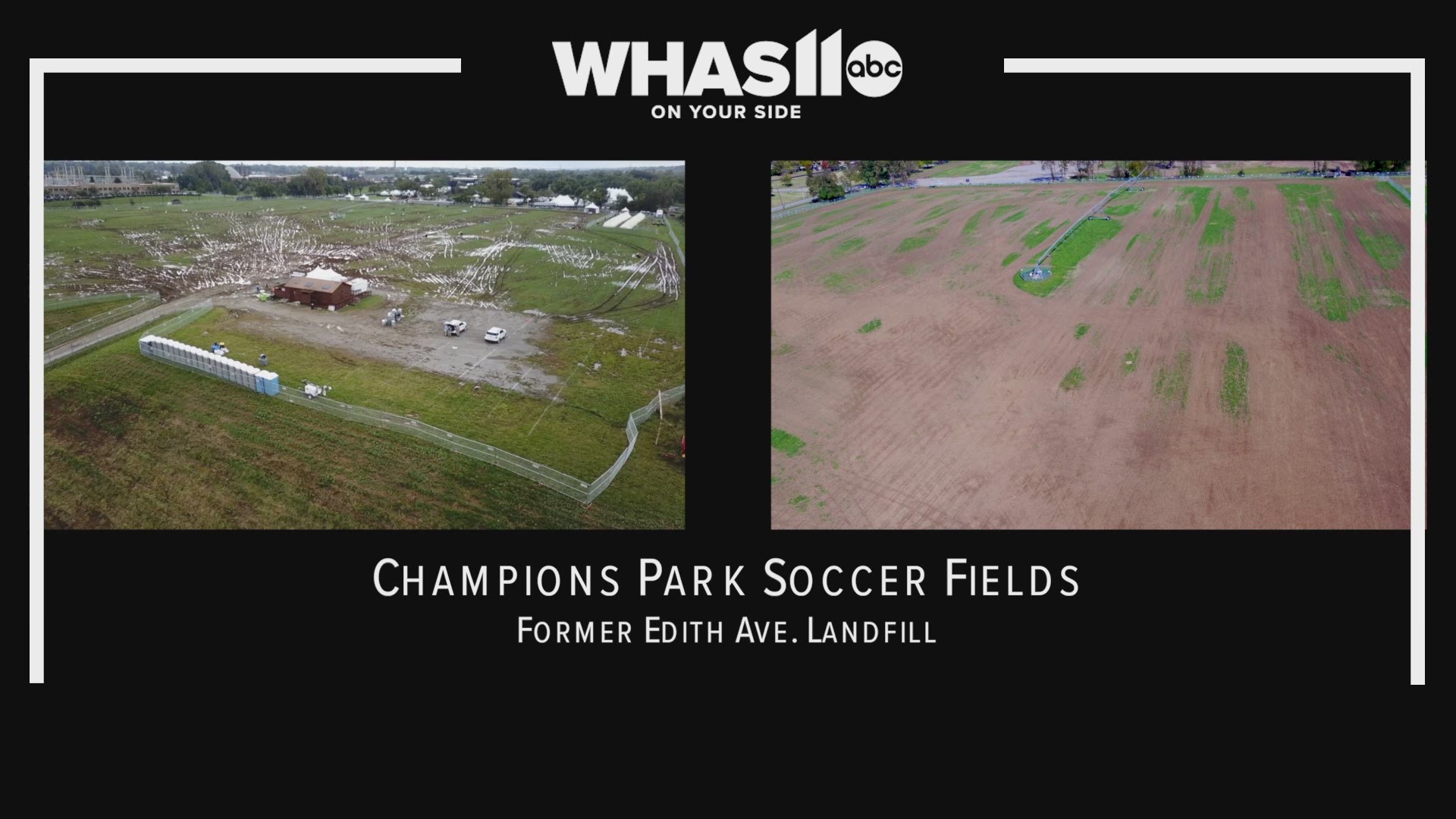 But another major safety threat was looming underground, as cars and campers continued to spin their wheels trying to leave the property.

“I saw pictures of it,” Tom FitzGerald, director of the Kentucky Resources Council, said.

Concert-goers were creating more cuts into the ground as they were trying to leave.

FitzGerald, the director of the environmental watchdog group, cringed at the thought of the ground being dug too deep.

“All would have taken is one corner of that front-end loaders, a bucket to scrape the ground,” FitzGerald said.

Which actually did happen as concert-goers had to be dug out and dragged through the mud to get off the property.

“I'm sure that nobody who was up there camping knew that they were camping 24 inches above a bunch of ash containing hazardous levels of lead,” FitzGerald said.

FitzGerald reminds everyone that this raised section of Champions Park, now the soccer fields, used to be the dumping grounds for lead-heavy ash leftover from incinerated trash. 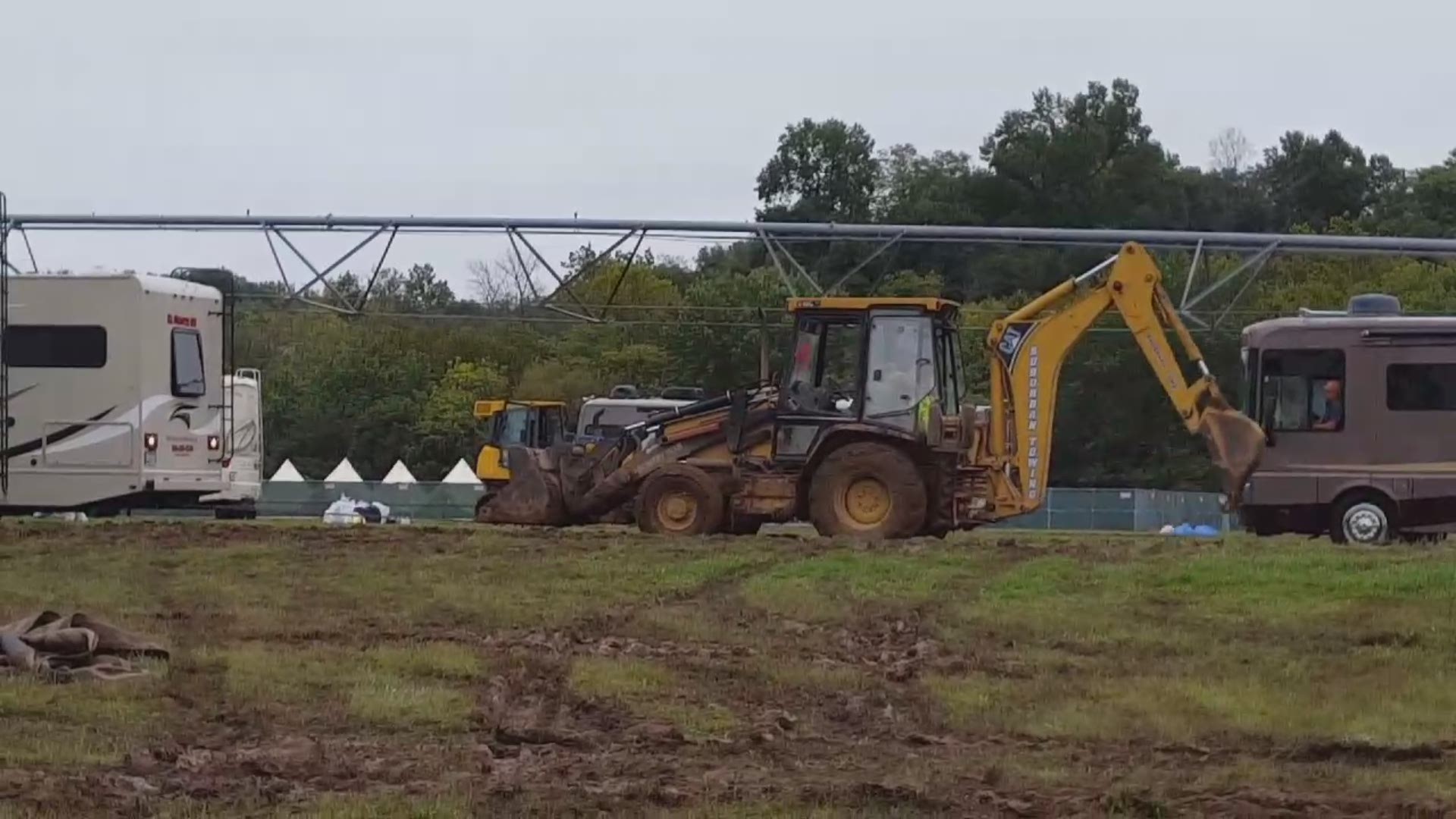 “In order to prevent inhalation exposure, dermal exposure, ingestion exposure--you create a barrier and you respect that barrier,” FitzGerald said.

The soccer fields were created to be a "level playing field," below ground level is a barrier to cap off the toxic ash buried beneath. It's a two-foot cap, six inches of soil on top of 18 inches of compacted clay.

The city was worried there was a breach after Bourbon & Beyond so they contracted Linebach Funkhouser, Inc. to test the disrupted soil.

They surveyed specific sections of the soccer field, looking for the worst spots and measuring the depth of the cuts into the ground.

Bill Johnston, a principal geologist at Linebach Funkhouser, Inc., was one of the people sent to survey the property.

“Looked at where the deepest ruts were, and then we pulled this tape out,” Johnston said.

Credit: BILL JOHNSTON
These are photos of the testing conducted by Linebach Funkhouser, Inc. at Champions Park, which was the former Edith Avenue Landfill, on Oct. 9. (photo via BILL JOHNSTON)

“We knew that the cap hadn't been breached based on the thickness alone,” Johnston said.

State samplers were also sent out to take samples of the soil.

The samples were then sent to two separate labs for testing.

“Both results indicated that there was not any contamination that had reached the surface of the site,” Johnston said.

Their conclusion, the cap is still closed.

“Everything is safe out here, no question in my mind,” Johnston said.

Credit: BILL JOHNSTON
These are photos of the testing conducted by Linebach Funkhouser, Inc. at Champions Park, which was the former Edith Avenue Landfill, on Oct. 9. (photo via BILL JOHNSTON)

“We got lucky," FitzGerald feels that is good news as well but fears the city came close to it being an even worse situation.

“They really did dodge a bullet,” FitzGerald said. “I would hope that they're going to be smarter this time.”

But what about "next" time? In 2019, the plan is for back-to-back-to-back music festivals.

“The city is now on notice,” FitzGerald said.

He is adamant the parking must move, the "proof" was in Bourbon, & Beyond’s 2018 festival.

CLICK here to see Linebach Funkhouser, Inc. report on testing at the park.

FitzGerald said the soccer fields will be fine for next year’s season.

For now, that's the goal, fixing the fields, for the kids to return to play on.

Louisville Metro Parks told us festival producers are responsible for the cost of restoration to the fields although they have already started restoring the property they could not provide an estimated cost for the project.

Danny Wimmer Presents, the company that produces the music festival series has a 10-year lease agreement to use the park.

As for potential risk for the future, a determination on whether parking will continue to be allowed on top of the landfill.

Many of the soccer moms and dads would like to keep the vehicles off so the kids can keep playing.

“The kids don't kick hard enough to tear up the ground,” Pozaric said.

But now knowing what Champions Park is made of...

“To find that out after the fact was very alarming,” Haworth said.

Not everyone in the league is comfortable with going back.

“I’m not 100 percent OK with it. The field gets torn up again, are we going to have to continue to worry about it?” Haworth said.

One last "away" game in Oldham County and then home field again next season.