Over the past three weeks, 15 companies have been cited for lack of social distancing, according to a WHAS11 News investigation. 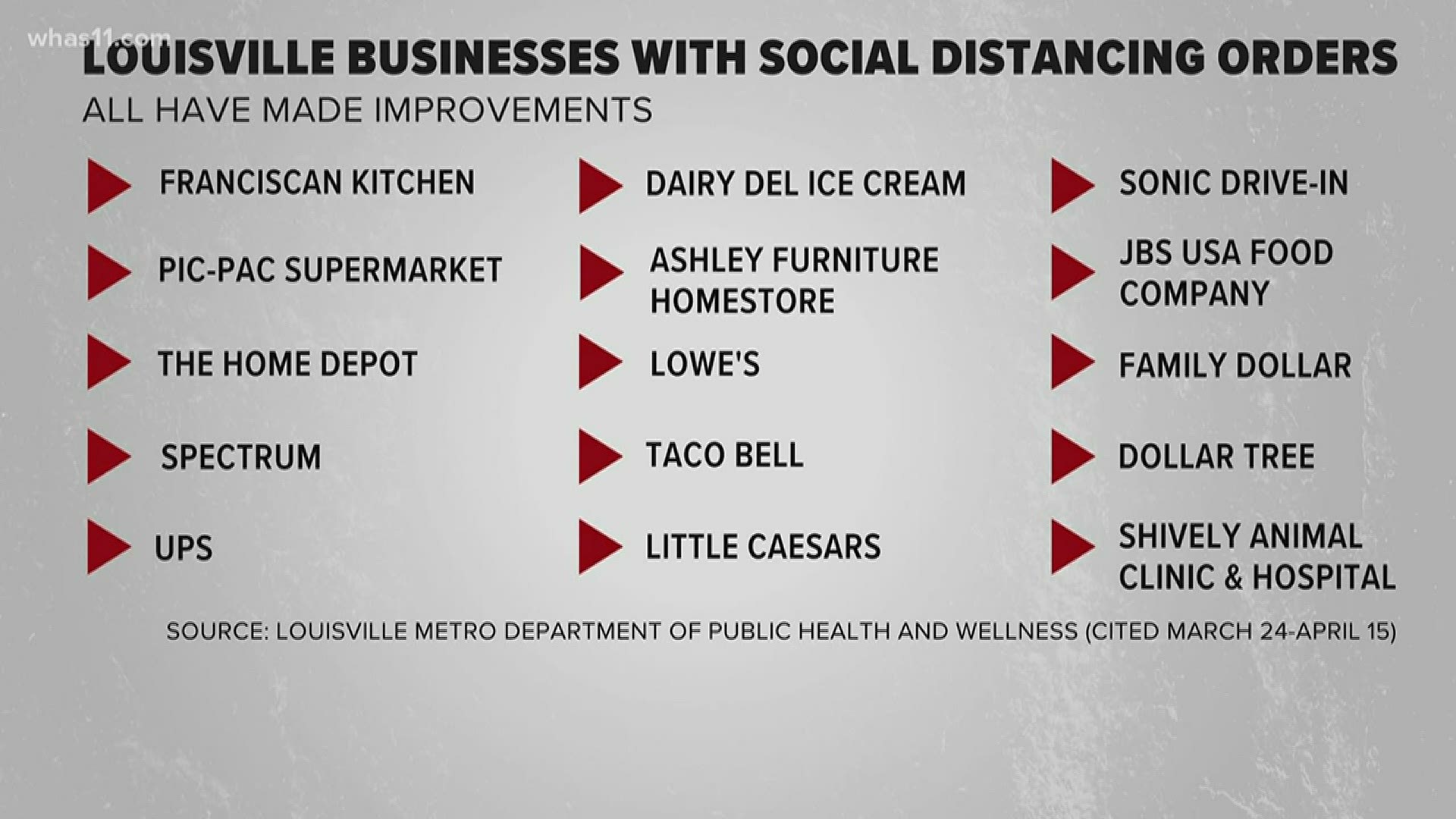 Louisville city officials are cracking down on social distancing at local businesses.

The WHAS11 FOCUS investigative team filed an open records request with the city to find out how they’re enforcing social distancing at companies of all sizes. We discovered over the past three weeks, 15 companies have been cited for lack of social distancing.

“When I first got the complaint I thought well we’re doing everything we could possibly be doing," said Chuck Mattingly, executive director at the Franciscan Kitchen, a Catholic organization and shelter that feeds about 500 people a day.

“The complaint that we had, the folks that were standing in line outside our building were standing elbow to elbow basically," he said.

The city’s health department handed him an order on April 2, requiring he take immediate action. He told us he did.

“We painted Xs on our sidewalk out front," he said.

He said people lining up for a hot meal now space themselves six feet apart. It’s the CDC’s recommended distance to prevent the spread of COVID-19.

The Franciscan Kitchen is one of 15 companies in Louisville health officials have cited since March 24 for not properly enforcing social distancing.

“So we’re working with those businesses to help them improve the practices," said Connie Mendel, deputy director at the Louisville Metro Department of Public Health and Wellness.

“How do you feel about how businesses are responding?” FOCUS investigative reporter Paula Vasan asked Mendel.

A spokesperson with Shively Animal Clinic and Hospital told us the city’s health department has responded to seven complaints about social distancing at the company, calling them unfounded. When city officials came to investigate complaints, their documentation shows the clinic was observing social distancing correctly. For example, instead of congregating in the waiting room, customers now wait in their cars for their appointments.

A spokesperson with UPS Worldport, a company cited for lack of social distancing, said they’ve added 30 shuttle buses each shift, allowing for more space between employees heading out to sort packages.

At The Home Depot on Breckenridge Lane, employees told us they wear signs as reminders. There are also signs along aisles, and bright yellow markers on the floor as visual cues.

“In addition to that they had an employee roaming the store with a pole that was 6 feet long," said Mendel.

That's an idea Mattingly said he might consider too.

“I am willing to listen and take any advice that they have because we’re all in this together and we all need to get through this together," said Mattingly.

Louisville health officials said when you look at the roughly 5,000 businesses they oversee, companies are doing a good job overall. But they’re not perfect. We are still hearing from people who say social distancing is loosely enforced where they work.

Here's what some other businesses are doing to enforce social distancing:

At Sonic Drive-In, a spokesperson said their improvements include limiting the number of people inside of drive-ins to only 10 at all times.

A spokesperson with Spectrum said they’re improvements include implementing work from home options to increase distancing in the workplace.

To report a complaint about social distancing: https://louisvilleky.gov/news/what-you-need-know-about-coronavirus#report

Residents who see establishments that refuse to comply can report violators in several ways:

RELATED: UPS partners with the UofL to provide shipping services for PPE project