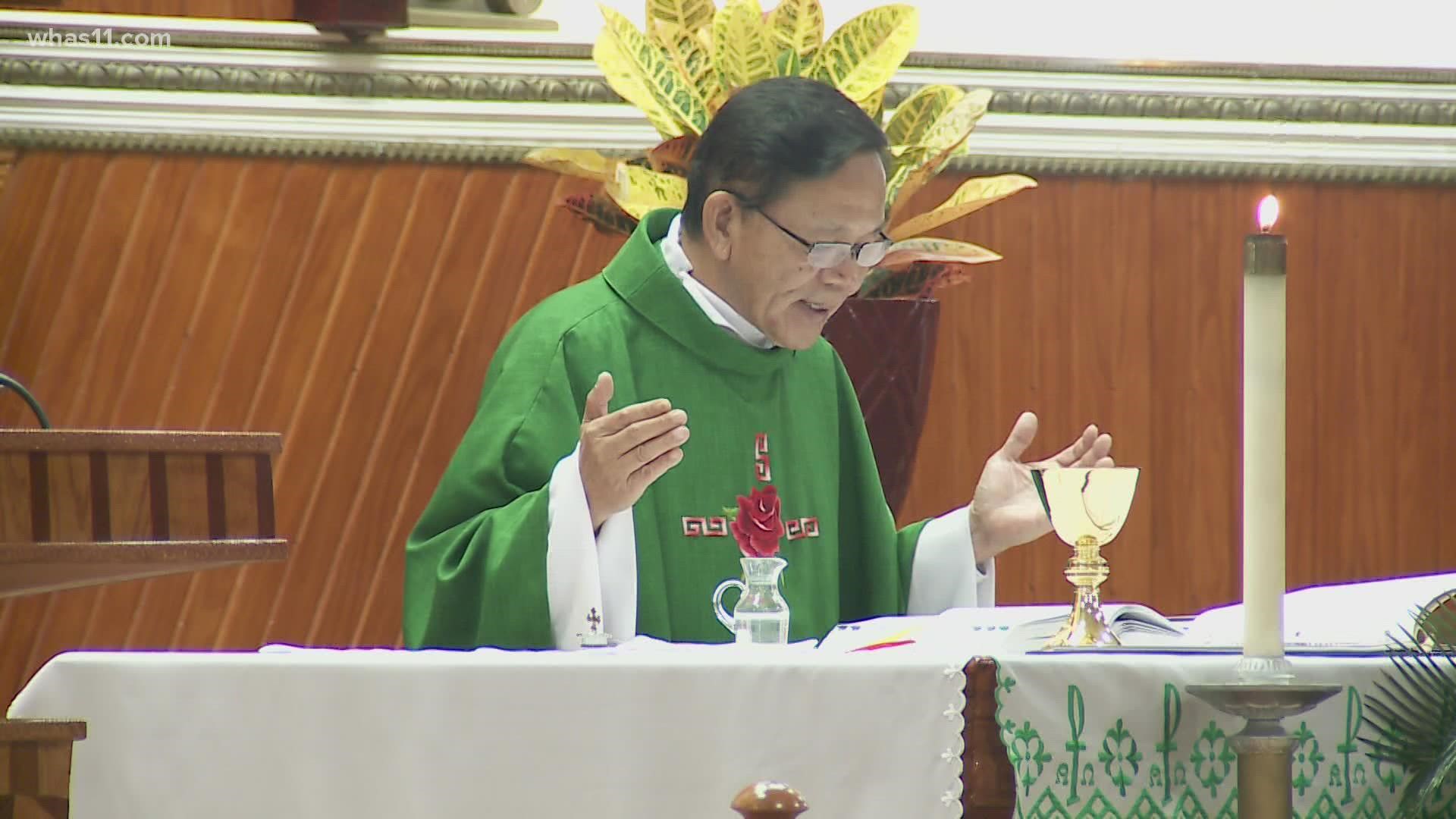 “I know that we have a case pending against me and against this community,” Ngo said.

Ngo has been the pastor at St. John Vianney’s for more than two decades. He denies he did anything wrong. Members of his former parish council and the parish’s former music director filed the lawsuit.

“In our church, financials have no transparency,” one of the men suing Ngo said. “We want it clear and we want to bring that to light.”

According to a letter from the Archdiocese of Louisville, a parish council consults with and supports its pastor. The pastor decides when the council meets and takes action.

The men suing Ngo said they were removed from their volunteer roles after raising concerns.

They asked we not identify them because they’re still attending church services.

The men said after trying to talk to the Archdiocese and Ngo himself without success, they felt they had nowhere else to turn and decided to take the matter to court.

“When we were pushed away like this, we felt like our efforts were not appreciated,” another parishioner filing suit said. “We became outsiders. We realized we have to have some help to bring it to light.”

“When he gave me the numbers of what was collected and what was reported, I realized this was bigger than I thought,” one of the plaintiffs said.

The men said they raised the issue with Ngo and filed a formal Report of Suspected Fraud with the Archdiocese on May 22.

A June 2 letter from Louisville Archdiocese Chancellor Brian Reynolds said they intended to review the parish’s financial transactions, but noted donations and gifts given by parishioners for masses dedicated to the deceased can be used by parish priests for personal use in some circumstances.

“The one providing the funds directs the gifts to either the parish or the priest,” Reynolds said in the June 2 letter.

Thien Luong, a parishioner who defended Ngo, said he agrees that donated money belongs to the priest.

“It belongs to him because the people are praying for him,” Luong said.

Ngo sent a letter to parishioners on June 6 addressing the questions raised by the parish council and noted he didn’t know the amount of money collected each week.

“They never gave it to me,” Ngo said in the letter. “I do not know the amount of money each week, except for the names of the souls and the intentions for me to pray according to your wishes.”

Then, two months later on Aug. 6, Louisville’s Archbishop Joseph Kurtz sent a letter to the parish council and Ngo.

In it, Kurtz says the Archdiocese was auditing the parish’s finances and said Ngo agreed to train a new finance council on “proper roles and procedures.”

In that same letter, Kurtz encouraged getting rid of the current parish council.

“The good progress made with parish finances leads me to encourage that the present parish council be dissolved, and a new council be formed,” Kurtz wrote in the Aug. 6 letter.

In addition to accusing the priest of breaching his fiduciary duties and improperly converting funds, the lawsuit also alleges Ngo fired the parish council in retaliation for asking questions.

“To me, this is God calling me to do something about the church. If we saw something wrong, we raised our voice,” one of the plaintiffs said. “They don't see anything wrong when we have the numbers; we have the proof. They tried to either delay it or to just ignore that and hopefully things would go away.”

Those filing the lawsuit want the money they say was converted from the church account to the priest’s account returned. They also want to look at the church’s bank accounts.

Last week, WHAS11’s Rachel Droze went to speak to Ngo before daily mass. He invited our crew to attend the service and spoke to them after.

“I let the archbishop and archdiocese take care of it,” Ngo said. “I hope and we pray for the people who are trying to break up this community.”

The plaintiffs, devout Catholics, said they feel they have to do this to keep St. John Vianney free of sin.

“They only want the pastor to go down,” Luong said. “That's all.”

In an earlier conversation, the Archdiocese said they completed their financial audit of St. John Vianney.

“As is the case with many parish audits, the report identified some procedural and management issues, and financial procedures will be reinforced for good financial management going forward,” Price said in an email. “No malfeasance was found.”

The Archdiocese wouldn’t provide WHAS11 a copy of the final report.

This lawsuit being brought is a civil suit. No criminal charges have been filed.