The FOCUS team found more than half of Louisville nursing homes fined for violations later received money from the government, some made more than they were fined. 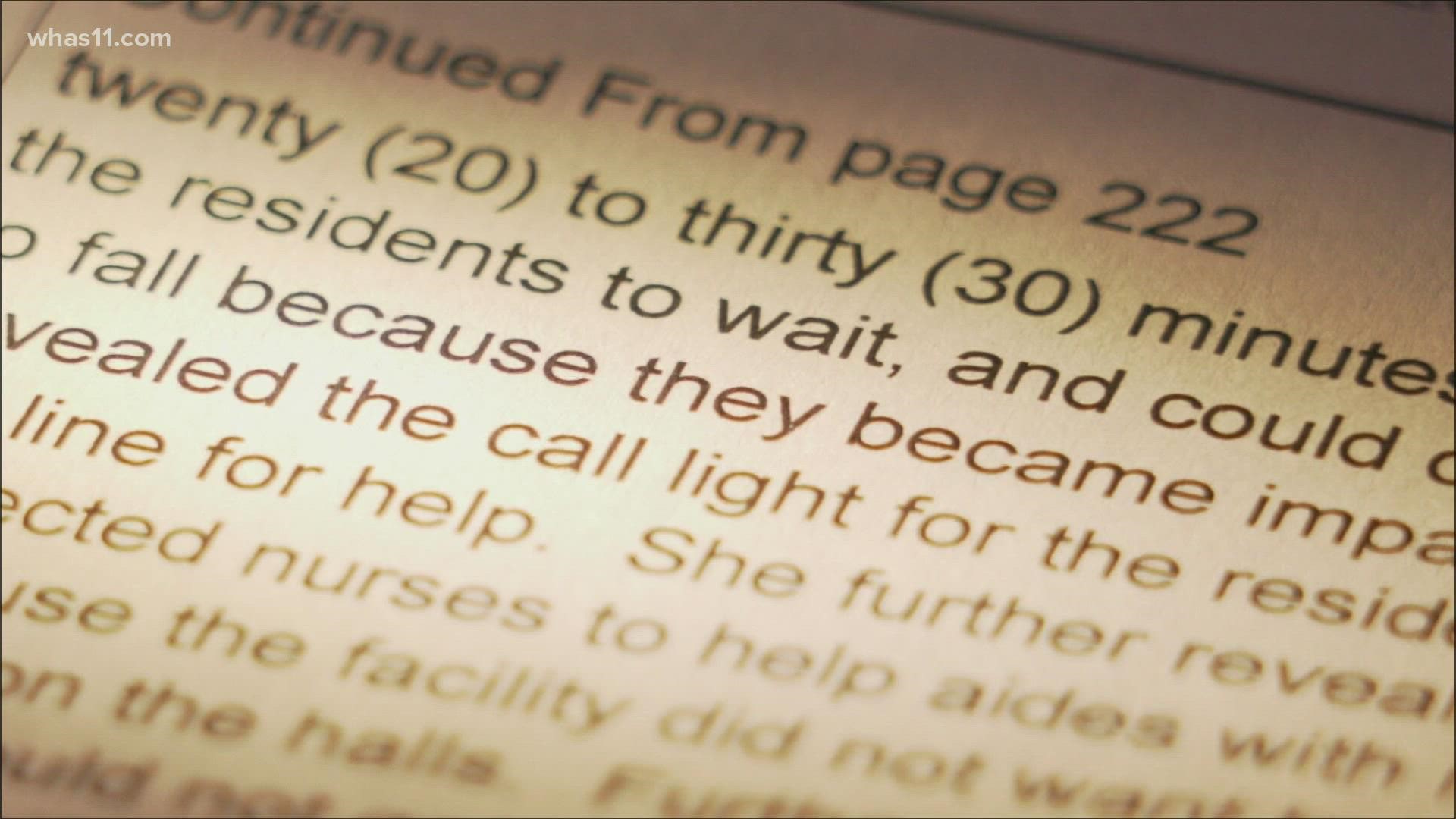 In some cases, the payments offset the penalties.

'At nighttime, I don't feel safe at all.'

"Nobody checks on you at nighttime," Robert Catron, a resident at Regis Woods told Investigative reporter John Charlton.

Regis Woods received one of the largest payments in Kentucky, rewarded with a total of $568,440 through the Provider Relief Fund COVID-19 Nursing Home Quality Incentive Program.

Now, Regis Woods is closing after the Centers for Medicare & Medicaid Services (CMS) terminated its agreement with the facility, citing non-compliance with federal requirements. Families are now left scrambling to find a new home for their loved ones.

A 338-page inspection report from last May 2020 detailed serious issues at the facility.

"It shows that some of our concerns were justified," Jackie Waldon said. She has to relocate her 99-year-old mother who was a resident at Regis Woods.

"At nighttime, I don't feel safe at all," Robert Catron, one of the last residents left at the facility told us.

In April 2020, one resident hit another with a television.

Inspectors also noted sexually inappropriate behavior by at least one resident with another that was incapable of giving consent.

When residents signaled they needed attention, inspectors noted staff was slow to respond.

"You turn your call light on and maybe they answer it and if they do it will take 30, 40 minutes," 66-year-old Robert Catron said. "That's one of the reasons they're in trouble, they're short of staff," he explained.

Through the Civil Money Penalty Reinvestment Program (CMP), Regis Woods was fined $202,153.25 in 2020. But after the facility was awarded an Incentive payment of more than half a million, they were paid $366,286.75 more than they were fined.

"We are the most regulated healthcare sector," Betsy Johnson with the Kentucky Association of Health Care Facilities and the Kentucky Center for Assisted Living said. "We are taking care of a very vulnerable population."

We compared each facility's fines to their payments and found, despite fines for failure to comply with CMS requirements, 23 fined facilities made money.

Civil Money Penalties or CMPs are fines slapped on facilities that fail to comply with Centers for Medicare & Medicaid Services (CMS) requirements.

But in 2020, the Department of Health and Human Services, the same agency dishing out CMP fines set aside $2 billion of the total $178 billion in pandemic relief money to reward many of the same facilities.

As you can see in the chart above, in many cases the incentive payments rewarded facilities exceeded the fines many facilities faced.

"I like to call them the bonus payments," Brian Lee said. He advocates for residents in long-term care facilities as executive director of Families For Better Care.

"They're a handout to the nursing homes," he explained. "It's appalling, it's absolutely appalling. It's a slap in the face of the residents."

According to the quality incentive program's spreadsheet, a total of $33,786,224 in payments went to Kentucky nursing homes, and 17 of the 29 fined in the Louisville area got help.

Regis Woods is part of Genesis Healthcare, the largest nursing home operator in America, yet the facility is closing.

"If they had the wherewithal to absorb some of the cost of the pandemic, I think this would be the company that would probably do it," Lee said.

Johnson explained that there is an application process that holds the facilities accountable.

While the Centers for Medicare and Medicaid Services was fining, its own department, the U.S. Department of Health and Human Services was rewarding.

"I think we'd admit that sometimes the government doesn't know, doesn't always make sense of the way they implement things," Johnson said. "I don't think they're the same thing, they're completely different things."

"Some people say they're comparing this, apples to oranges, I don't think so, we're talking about fruit," Lee counters.

Brian Lee complains it was low-hanging fruit branching off from the pandemic relief nursing homes were already getting.

"A carrot out there that the feds dangled before the nursing homes to get them to submit their COVID data," Lee said.

Not fruitful enough, however, to help keep this nursing home open.

"Here, the last month sir has been awful," one of the last residents at Regis Woods Robert Cantron said.

“This type of investigation is exactly what’s needed, I want them to open their books.” – Brian Jasper/Thomas Law Offices

Brian Jasper is an attorney with Thomas Law Offices and his specialty is patient/resident litigation against nursing homes.

It makes sense because he says he was a Licensed Practical Nurse (LPN) for 13 years in long-term care.

“Basically, they’re being paid to fail,” Jasper said after watching our FOCUS investigation on nursing homes fined in 2020 which were also rewarded by the same federal agency, the U.S. Department of Health and Human Services.

“It’s a net gain for the facility after they appeared to be failing to meet minimum regulations,” Jasper said. “I kind of liken it to your parents, they’re grounding you on the one hand and they’re handing you $150 on the other, and what kind of message is that sending to me if I’ve done something wrong?”

Although payments from the Provider Relief Fund COVID-19 Nursing Home Quality Incentive Program were supposed to go to efforts to fight the virus inside nursing homes, Jasper is skeptical.

He suspects that the payments could have also been used as revenue at rewarded nursing homes, adding to their bottom line.

“It’s untethered money,” Jasper said. “I am suspicious of any monetary incentive program in the long-term care industry.”

HOW TO CHOOSE A NURSING HOME

When it comes time to choose a nursing home for your loved one, the decision can feel overwhelming.

Nursing homes are inspected every 9 to 15 months or whenever a complaint is lodged with the state's regulatory agency. These reports are available online along with a star rating for each facility.

Compile a list of facilities that have a good record and move on to step two.

2. Call your local ombudsman office and ask for additional information

The Long-Term Care Ombudsman is a federal and state-mandated advocacy program. Ombudsmen regularly visit residents and investigate complaints from a resident's perspective.

The Ombudsman Program is a treasure trove of information. Program staff and volunteers are very knowledgeable about laws and regulations that govern resident care. Using your list from step one above, ask the ombudsman office to provide you a summary of complaint data for each facility you identified. Also, ask to speak with the ombudsman who visits the facility as they can give you further insight on resident care.

And if problems ever arise at the nursing home, they will gladly help. The program offers free services and all complaints are confidential.

(IMPORTANT: Make sure to plan some visits at night or over the weekend, problems typically occur during these shifts)

When you arrive, don't be star-struck by the lobby. Nursing homes invest a great deal of money in their lobbies to make them feel warm and inviting, but this can often be fool's gold. Care happens beyond the administrator's office. Don't be afraid to walk around the facility and ask some tough questions.

Spend considerable time talking with families and residents without staff present. They'll give you an honest assessment of what life is really like in the facility.

Watch out for these red flags, they are frequent indicators of negligent or abuse care:

Following these steps should give you enough information to avoid a nursing home placement misstep.

If the need for nursing home care is suddenly thrust upon you, call your local ombudsman immediately. Program staff have nursing home information readily available and can help you make an informed, albeit quick, decision.