While some believe it is the right move for students in smaller schools with fewer resources, others argue the idea is built on serving certain students. 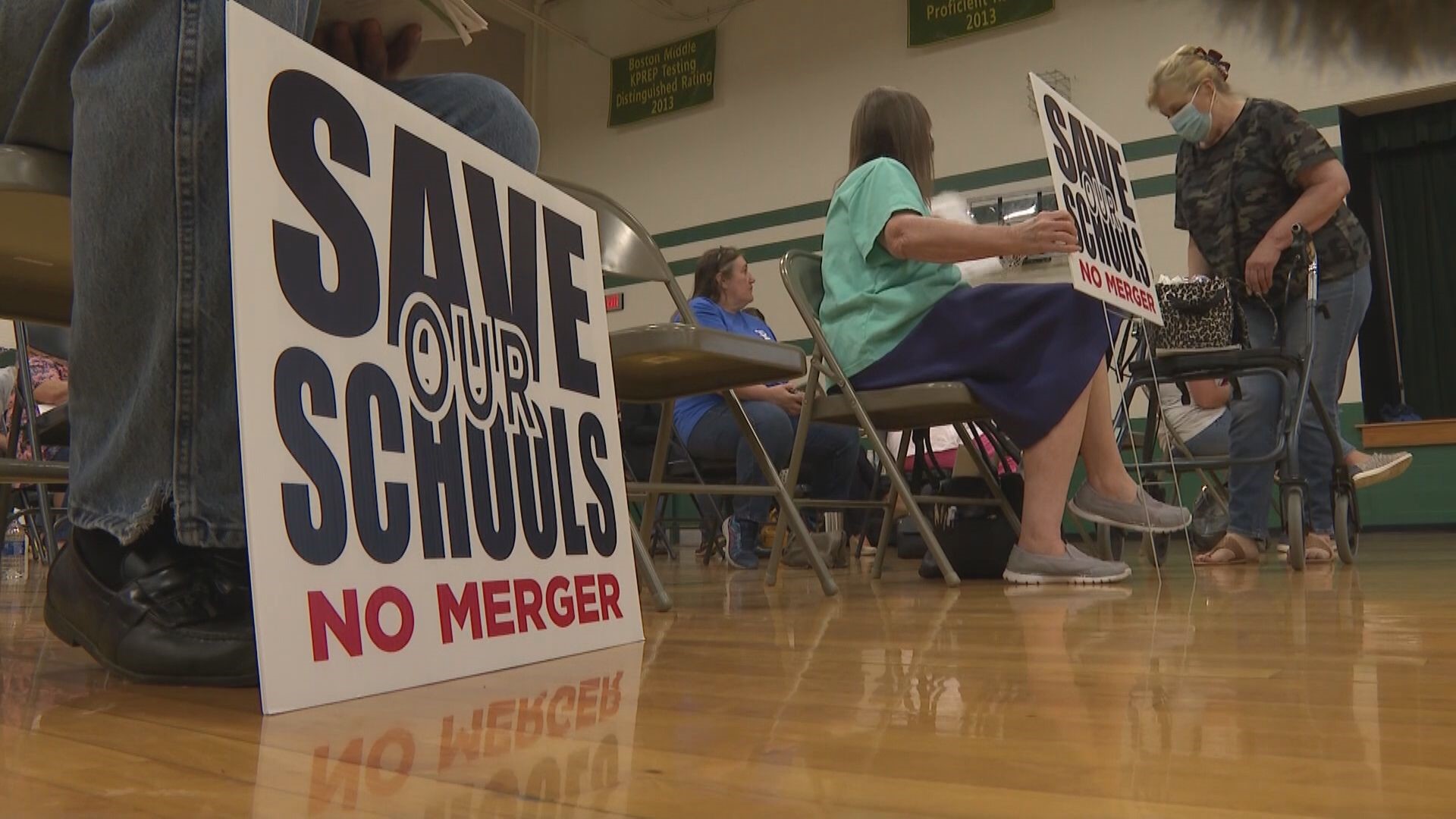 NELSON COUNTY, Ky. — A small county in Kentucky is facing a big controversy as leaders in the Nelson County School District propose a new vision for the district's future. The proposal includes merging the district's middle and high schools at two campuses.

While some believe it is the right move for students in smaller schools with fewer resources, others argue the idea is built on serving certain students.

But controversy surrounding schools in Nelson County is not new.

"In 1962, Bloomfield had a high school. The state education board was telling us, 'You've got to consolidate your high schools.' And Bloomfield said, 'No, we're not. We're going to fight you 'til the end,'" Former Bardstown Mayor and Nelson County Historian Dixie Hibbs said.

Parents in Bloomfield felt cheated. They wanted their children to attend school close to home, but the move would put Bloomfield kids in Bardstown, about 13 miles away. Fifty years later, that familiar feeling has returned for some.

"I think they've felt like they've lost control of everything," Hibbs said.

Superintendent Wes Bradley first presented the idea at a Nelson County Board of Education special meeting in April 2021.

Bradley called it a conversation starter. It was the first time parents, students and staff heard his idea to combine the district's middle and high schools into two buildings called "community campuses." His presentation explained the campuses would expand opportunities for students, including “increased academic course offerings”, “college access” and “career connections.”

Many parents applaud the plan, telling WHAS11 is would be a "game changer" for students in smaller schools. But others were eager to speak to FOCUS about their concerns with Bradley's proposal.

"I don't feel like any of the questions we have asked have been honestly answered," Nicole Milburn, a parent of three students in the district, said.

The middle school in Milburn's town would close and she's concerned about what will happen to the building and the town left behind.

"I feel like if this merger does go through, it is no only going to affect our children and what they're going to go through. It will also affect our entire community, our businesses, Bloomfield will become a ghost town," Milburn said.

David Norman, the parent of a special needs student, said all students in the district are not treated fairly. He claims his son was left out of a plan built on high achieving students.

"In a public school, you can't pick and choose which children you want to educate and I think that's what's happening in Nelson County Public schools," Norman said.

Retired Nelson County teacher Susan Santa-Cruz Rogers volunteered to speak up on behalf of staff who raised concerns about the merger. She said many educators decided to leave the district in response to plans for the merger and the superintendent’s change in curriculum, which he said aligns with the overall “vision” for the district.

"My colleagues, they could not have their own opinion," Rogers said. "It was brought to them pretty suddenly and I feel like they feel helpless. They feel they have no say in the matter."

FOCUS filed an open records request to look into staffing changes. Data provided by the district shows 59 staff members resigned during the 2020-2021 school year, compared to the 12 resignations from the year before.

Some of the resignation letters cite the district's vision as a reason for leaving, saying it no longer correlates with the vision or values of educators.

Not only did staff decide to leave, parents also pulled their children out of the district.

"For me, it’s not about the merger. For me, it’s about what's fundamentally wrong with education in Nelson County," Vanessa Hurst, a parent, said. "The rigor and the academic achievement and curricular structure is not being taken seriously in Nelson County."

Hurst took her children out of the district because she felt they spent too much time on projects that didn't align with core curriculum. But during a final meeting with her child's fifth grade teacher, Hurst said it became clear how behind he was.

"The teacher afterwards slipped me a post-it note with all of the things he was lacking, knowing he was going to a different school this coming year. I was going to have to tutor my own son at home over the summer to catch up to where he was supposed to be," Hurst said.

Students, like Rosalie Brown, say they can see their teachers' concerns, and it rubs off on them.

"They're not taking former teacher's thoughts. The current teachers that work with them can't speak their opinions," Brown said.

She brought her concerns to the superintendent at the school board meeting.

"I felt like he thought that I was incompetent and wasn't being serious and didn't know what I was talking about," Brown said.

When FOCUS reached out to Bradley about his vision and why he thinks it is the best choice for the district, he sent this statement: "We are excited to continue to expand learning opportunities for students across Nelson County."

Since the short statement did not answer the questions FOCUS asked, we attended a school board meeting to speak to Bradley in person. He directed us to the previous statement and refused to answer any questions.

The plan to merge the schools is currently on step three of eight. Right now, the local planning committee is creating the district facility plan, including costs. Then it will go to the Kentucky Department of Education for review, before a series of votes and more public hearings.

If it does pass, construction could start summer of 2022, with students moving districts the following year.