What happened to the second round of P-EBT cards promised to Kentucky families? | FOCUS

Kentucky families were told a second round of financial assistance would come in October. Halfway through November, some families are still waiting. 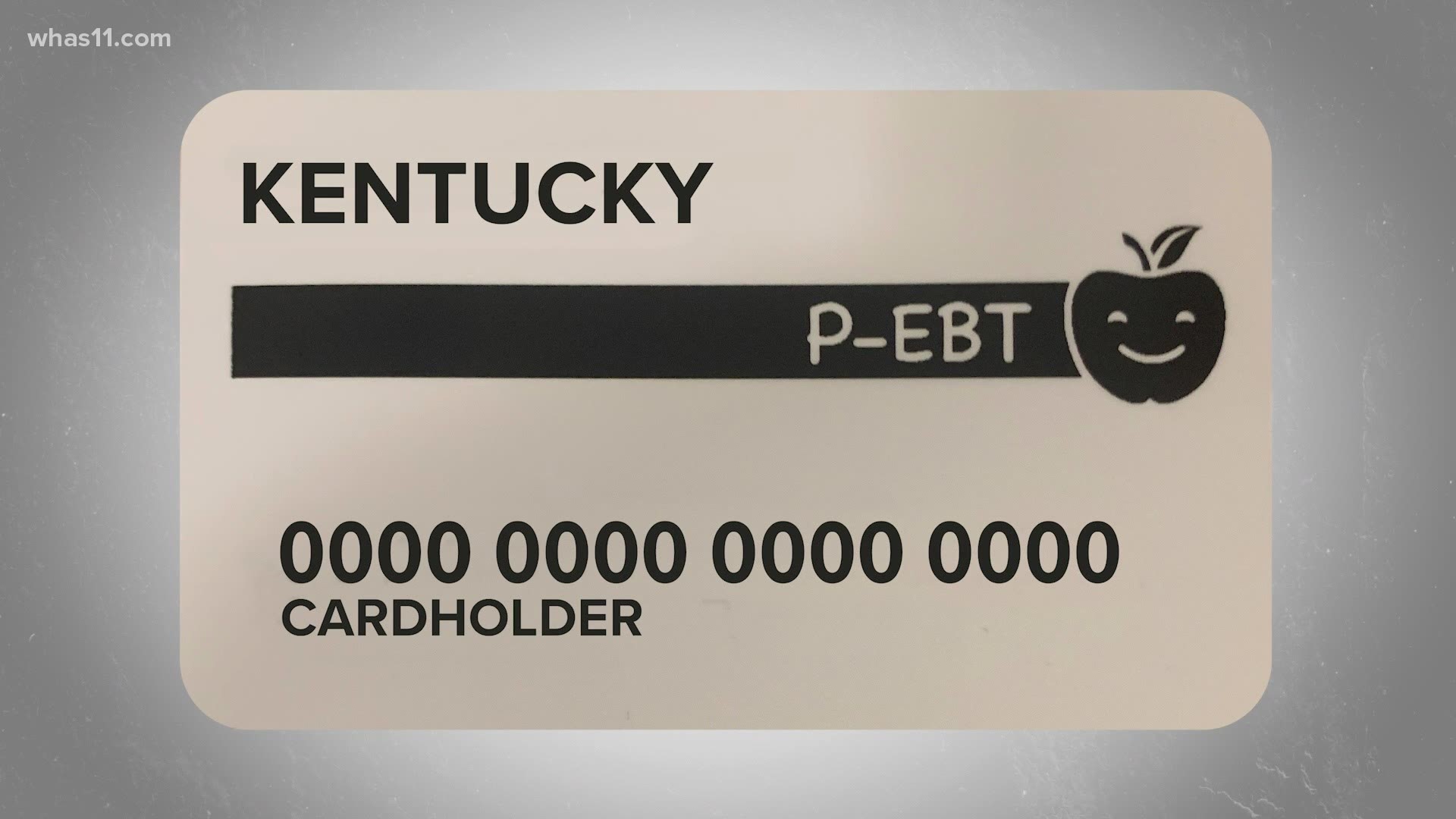 LOUISVILLE, Ky. — PUA, PPP and P-EBT. These are pandemic-related acronyms that most of us have heard since March. In some form or fashion, they all translate into help for people.

In the case of P-EBT, there really is such a thing as a free lunch. However, many in Kentucky are still hungry to get it.

On a regular school day, LaRue County Public Schools feeds between 1,800 and 2,000 students, but nothing has been regular about 2020.

This week, again, class isn't taught in the classroom and that means school lunches aren't served in the cafeteria. They are either being delivered or picked up by parents. Every household in the district that wants a free lunch gets one. On what a district calls a "good day," around 600 meals are given to LaRue County families.

"We continue to feed kids every day," Utley said.

During the final three months of school in the spring of 2020, when districts across the country shut down due to the coronavirus pandemic, states partnered with the USDA to deliver money to families via "Pandemic Electronic Benefit Transfer" or P-EBT cards.

Utley said families in LaRue County received a total of $313.50 on their cards. The money could be used like food stamps to help cover food expenses in each household.

"I figured that they would give us the first round, but I was not expecting a second round," Amy Fortner, a Kentucky mom, said.

That second round was expected to arrive in October for meals lost in August and September due to non-traditional instruction (NTI). However, many parents are still waiting.

Utley said she receives complaints every day from parents asking where their cards are and when they're coming.

Jennifer Maxwell, a mother of three, is still waiting for that second round. She said her family received more than $600 during the first round of P-EBT cards. For a family living paycheck to paycheck, that money was a huge relief.

"That helped us out tremendously with getting groceries," she said. Her two school-aged children should have been automatically registered for the second round, but Maxwell said the cards didn't arrive in October.

"It's just kind of waiting game," she said.

After hearing and then seeing complaints on Facebook, FOCUS pressed Kentucky officials for answers on what the hold up is.

The Kentucky Cabinet for Health and Family Services blamed a backlog with the vendor, Fidelity Information Services. After some follow-up emails, Cabinet Secretary Eric Friedlander used Governor Beshear's press briefing on November 12 to update people on the progress.

"In the beginning of November there were only about 3,000 cards that were out," he said. "Well, I'm happy to report that as of today we are almost at 500,000 cards that have been sent out."

Maxwell's family did finally receive their P-EBT cards on Nov. 17. The cards don't have as much as the first round, but she said she's still grateful for the help.

Thursday, the Cabinet for Health and Family Services sent FOCUS this statement regarding the cards:

"In March/April/May, about 540,000 P-EBT cards were issued to Kentucky’s children. About 625,000 P-EBT cards were issued in August/September. The second round was funded for $115 million. Congress passed a continuing resolution that would cover a third round for October and November. States received guidance just this week, and more information will be shared. Thank you."

"Anything right now helps," she said. If there is a third round of cards, Maxwell has some advice for the state.

"They shouldn't have told us to destroy the first cards," she said. "Don't destroy the cards, we'll just reload them on there. That would have been a lot easier."